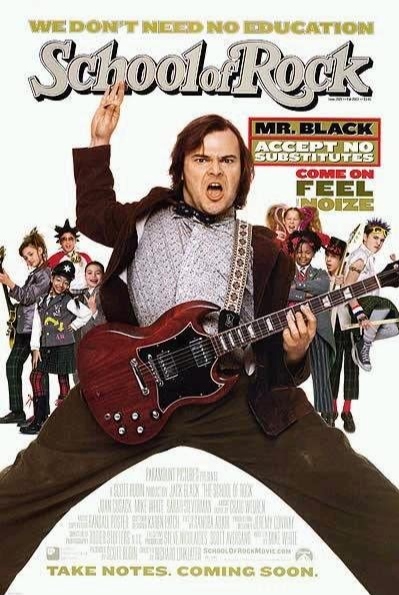 After being kicked out of his rock band, guitarist slacker Dewey Finn (Jack Black) faces a mountain of debts and depression. He shares an apartment with his best friend, Ned Schneebly, an old band member who is now a substitute teacher. Dewey accepts a job as a substitute teacher at a snobbish private elementary school where his attitude and hijinks have a powerful result on his students. He learns they are talented young musicians, and he decides to form a rock band with them to win the $10,000 prize money in a local band contest. Once Dewey wins a competition called “Battle of the Bands,” the prize money would solve his financial problems and put him back in the rock music spotlight.

While a platform for Jack Black to play a mean air guitar (and real electric guitar), School of Rock also has a surprisingly positive message about body image and finding your passion. In his own bumbling way, Dewey helps the kids in his class to discover they have hidden talents despite what the outside “packaging” may look like.

In 2021, this 2003 film resurfaced as a cultural moment when a brief clip of Black’s character talking to one of the fifth-graders, a student named Tomika (Maryann Hassan), about her stage fright. In the scene, Tomika worries the audience will laugh at her “because I’m fat.”

While the scene could have been played for laughs, instead, Dewey delivers a touching pep talk designed to encourage Tomika to embrace her talents and not worry about her weight. “You’ve got something everybody wants,” Dewey says. “You’ve got talent, girl. You have an incredible singing voice … You heard of Aretha Franklin, right? OK, she’s a big lady. But when she starts singing, she blows people’s minds.”

Dewey drives the point home that weight and worth are not tied together. “You know who else has a weight issue? Me. But once I get up onstage, start doing my thing, people worship me! Because I’m a sexy—and chubby—man.”

The scene ends with Tomika asking why Dewey doesn’t simply diet to lose weight, to which he replies, “Because I like to eat. Is that such a crime?”

It can be easy to dismiss the movie as a shallow, fun film, but when you dig a little deeper, its messages of positive body image and finding your talents is one that will resonate with kids and adults alike. School of Rock never tries to be more than it is—an enjoyable flick—but its subtle messages can spark meaningful conversations.

Dove awards this film the Dove-approved Seal for Ages 12+.

A down-and-out rock guitarist finds he has something to teach fifth-graders about believing in yourself and finding your passion.

While Dewey starts off as a slacker, he eventually becomes a good role model, teaching self-control, perseverance, and teamwork.

A girl threatens to cram drum sticks down a boy’s throat; Dewey throws a chair in frustration; a father aggressively disciplines his son.

Two characters drink and one later gets drunk; smoking, portrayed as cool to some kids.

Dewey Finn takes his shirt off right before attempting to crowd-surf, which ends poorly.

Main character misrepresents himself to get a job, but comes clean in the end.