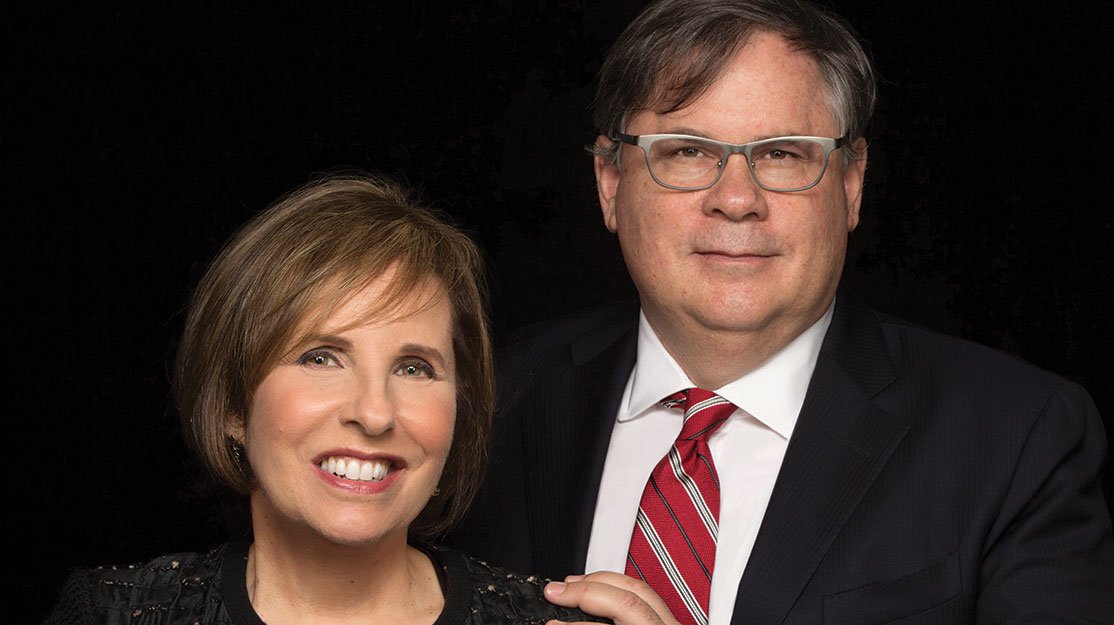 Robert and Michelle King have delivered massive hits for CBS in the past, with The Good Wife and The Good Fight. Now, they’ve turned their attention to a series that explores the delicate balance between faith and science, with a creepy little thriller called Evil, starring Mike Colter, Katja Herbers, and Michael Emerson. Catching up with the Kings is like encountering a dual force of nature, with self-deprecating humor, honest reflection, and creativity all rolled into the mix.

While the Kings are best known for the Julianna Margulies and Christine Baranski world they created, they also have an Innocence Project-themed show In Justice and the political zombie satire BrainDead on their resume, as well as Robert’s Vertical Limit, Clean Slate, Red Corner, and Cutthroat Island film scripts. But the two of them clearly enjoy working together, at home and writing scripts.

“There is no barrier between home life and work life,” said Michelle. “We talk home at the office and the office at home. I don’t understand how anyone could do this work without a support to what they’re doing.”

Robert concurred, adding, “We have a daughter, now twenty, who we’ve involved in all of it, too. As a preschooler, she named characters after all of her classmates. It was pretty funny to walk into her classroom and meet Matan, the villain for seven seasons on The Good Wife.”

Looking back, the two can see the development in their process, first working together with Jason O’Mara and Kyle MacLachlan on In Justice. They crafted the ideas together, often playing off their leads’ strong suits, but ultimately, they recognize that a reliance on the writers’ room, their support team of other writers drafting the scripts, led to losing the voice of the show. Now, with Evil, it’s their voices that show up in pretty direct ways in the show’s development.

“We wanted to write a show that comes through the process of science versus religion,” shared Robert. “We both come at it differently, and see our beliefs treated fairly. I’m more religious than Michelle and she’s more secular.”

“We wanted to have difficult conversations and value both sides. The show provides a bigger canvas. Sometimes with The Good Fight or The Good Wife, you can get bored of the same setting, bored of the courtroom. We’d never addressed violent crime scenes because we’re not really into that, the court cases were always afterward, but we wanted to have scares, comedy, the bigger canvas that entertains you in the theater.”

Michelle shared that she had just shown the second episode to their daughter, who was taken aback by the subject she saw on screen. “She told me, ‘I’m used to art taken directly from our lives, but I’ve never seen our dinner conversations on screen.’ You see Robert’s faith in the priest novitiate David Acosta who Mike Colter plays and Kristen’s more secular approach echoing my own.”

In the second episode, as the new team of Acosta and Kristen examine a potential miracle, Robert says his own difficulty with prayer comes into focus. “I do all of the Catholic prayers, praying the rosary and at night, but I have trouble concentrating,” he admitted. “Michael Emerson, who is either a representation in the demonic or a sociopath depending on your perspective, keeps approaching David from behind while he tries to pray. He keeps him from praying, even comically using the Abbott & Costello ‘Who’s on First?’ routine. Prayer is so abstract and the slightest distraction in the room can keep me from praying.”

In their distinct way, the Kings have crafted a series that will entertain audiences (and maybe scare them), but that will certainly allow them to consider the world we live in and the worldview we use to evaluate it. From the courtroom to the spiritual and mental battlefield, the Kings have made the leap and they’re inviting audiences to join them.