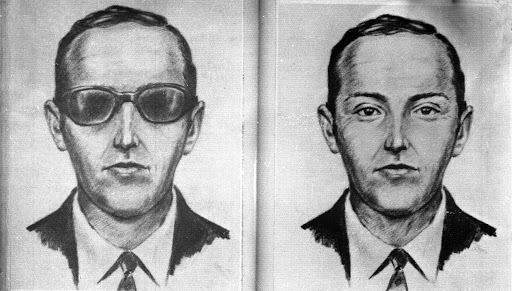 Emmy-nominated documentarian John Dower delivers a thrilling, thought-provoking film about the only unsolved airline hijacking in American history in The Mystery of D.B. Cooper. Interviewing several individuals who are certain that their friend or relative was Cooper, the film paints an interesting exploration of the crime committed by a mysterious man who was both criminal and folk hero.

On November 24, 1971, a man identifying himself as Dan Cooper boarded a Boeing 727 and hijacked the plane between Portland and Seattle, using a bomb. He demanded (and received) $200,000 in cash, and then parachuted out of the plane. While the FBI is convinced that he did not survive the fall, and in 1980, a young boy discovered money attributed to the Cooper case, no one is sure what happened to Cooper or what his motivations were.

Exploring the evidence, and doing first person interviews, Dower pulls together several lines that have substantial reasons for why THEY are the ones who knew the real Cooper. But they can’t ALL be Cooper, even as the film also highlights others who were inspired to pull of incredible heists in admiration for the man who parachuted out of the plane in 1971.

Ultimately, the end result isn’t that we know who Cooper was but who he might have been, and we’re left as an audience wrestling with what we think happened, and why it might have happened. The motivation, the purpose, the means of pulling it off – all of these raise questions about how we think about money, fame, and justice. Because the reality is that there is admiration for a man who supposedly held a plane full of hostages with a bomb; there’s some belief he did it to show the way that the world wasn’t working right, how it was unfair, and in fact, that he “stuck it to the man.”

With the exception of a few uses of strong language, this film was a thrill-ride and a search for existential truth. How well do we really know each other? How are we really known? In the end, our reality may not last forever, but the choices we make have eternal ramifications and echoes in the lives of others.