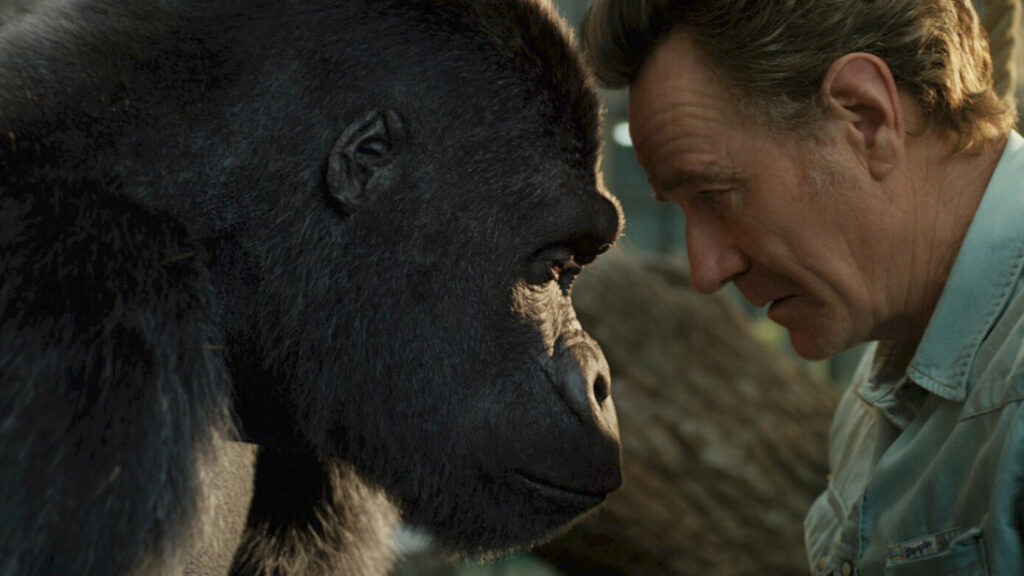 At the Exit 8 Big Top Mall and Video Arcade, dwindling crowds came to see the silverback gorilla Ivan (Sam Rockwell), the elephant Stella (Angelina Jolie), the baseball-playing chicken Henrietta (Chaka Khan), and other novelty animals, under the watchful eye of the mall owner Mack (Bryan Cranston). But when Mack acquires the baby elephant Ruby (Brooklyn Prince), Ivan engineers an escape with his gaggle of circus animals and the stray dog Bob (Danny DeVito). Can the animals really survive out on their own?

The One and Only Ivan is based on the K.A. Applegate story of the same name, but that in itself was based on fact. In 1962, the real-life gorilla was born in the Democratic Republic of Congo. By 1964, he was captured and transported to Tacoma, Washington, where he became the family pet of a suburban family, but when he grew too big, he was put on display at the B&I Circus Store for the next twenty-seven years. His existence in the mall became a lightning rod for animal rights.

In the Disney version, the back story isn’t as important — it matters where the animals go from here.  Their love for each other, their camaraderie in humanistic, cross-species ways shines, in what is arguably the best Disney live-action animal film yet. That’s right: this one allows human-like characteristics like talking, raising an eyebrow, etc. to look organic to the animals, in ways that other films (The Lady & The Tramp for one) do not. That’s what makes them seem equal to the humans, like Mack, or maybe better than Mack given their morals. And alongside Julia (Ariana Greenblatt), the daughter of one of Mack’s employees, Ivan finds his voice, and his purpose.

There’s plenty here about animals deserving to be free, to be who they were meant to be, touching on Ivan’s drawing ability and more. But it’s also deeper than just freedom from the cages of human entertainment in a zoo or circus; it’s about what happens when we refuse to be defined by the roles that others push us into and instead recognize what God is calling us to be.

In the end, The One and Only Ivan has lessons for us all.