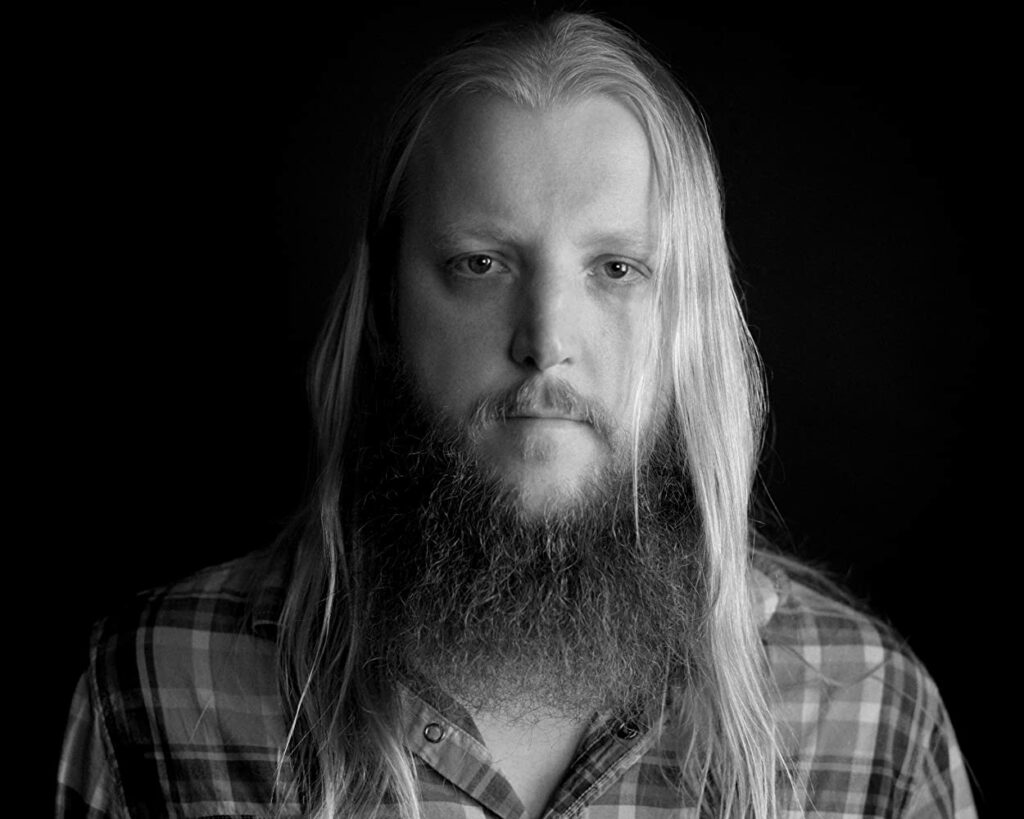 Having grown up in the Methodist church in Georgia, screenwriter and director Scott Teems knows that religion is just baked into your upbringing, that everyone has experienced it in one form or another. While he’s known for writing horror-based stories for Blumhouse Films and has been tapped to write the screenplay for the next Halloween film, with The Quarry (out Friday on demand), Teems is tapping into his own experiences in bringing Damon Galgut’s novel about faith, violence, and redemption to life.

Teems knows that his own faith experience has been something he wrestled with in high school and college, so stories that ask questions about metaphysical situations attract him. In Galgut’s book, a nameless man (played in the film by Shea Whigham) assumes the role of an itinerant preacher named David Martin (Bruno Bichir) after striking him dead in a stone quarry outside of town. What follows is both spiritual exploration as Whigham’s preacher navigates how to play the role, while also dodging the attention of the ever-watchful law enforcement, Chief Moore (Michael Shannon). Can the preacher who isn’t a preacher really lead a congregation well, while being duplicitous? Can Moore be a just lawman with all of his racial presuppositions about people? Teems was more than willing to tackle the big questions behind the men’s actions and their beliefs about good and evil. 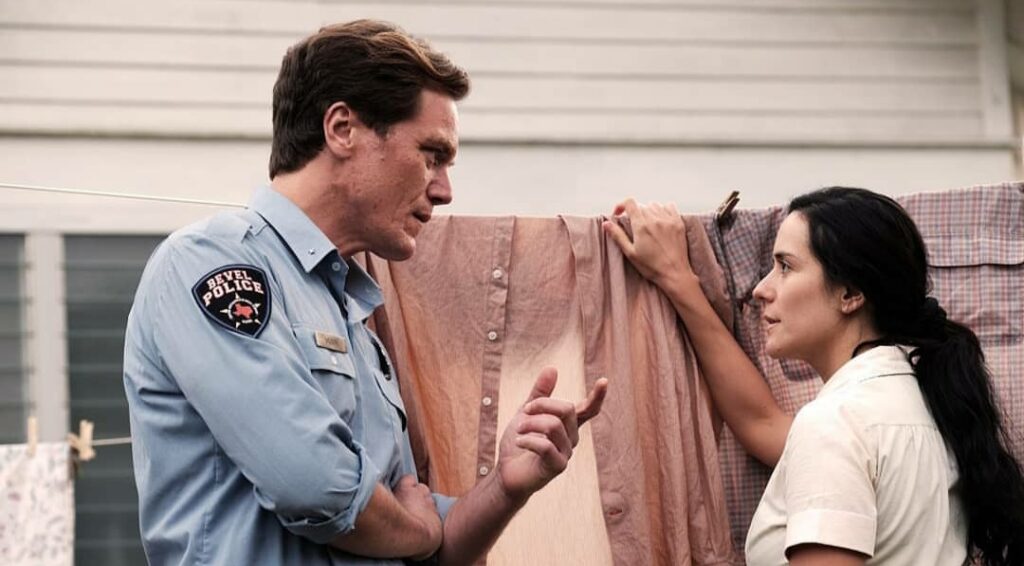 “I don’t ever want to stop asking those questions about faith,” he explains from his home in Los Angeles. “The opposite of faith isn’t doubt but it’s certainty. If there is a God and God is real, you’ll never know it all. I want to wrestle and ask these questions. I’m fortunate that I get to ask the questions like this across the canvas of the movies.”

The intriguing layers of Galgut’s novel involve aspects that play out like a murder mystery, elements that are class warfare, and, of course, the spiritual existential questions. In Teems’ adaptation, he focused on the exploration of religion while Galgut had examined nature and the violence of man. “I leaned into the religious aspects because it’s my experience and interest,” explained Weems. “Damon has supported us and allowed us to take his novel and evolve it, which it needed to, because it’s South African. We made it American which allowed it to be personal to my co-writer Andrew Brontzman and me. But the story allows it to work on many, rich thematic levels. It’s elegant simplicity and scarcity that allow it to reach different people. It’s primitive and primal with a great hook: a stranger rolls into town claiming to be someone he’s not, and we’re asked, ‘Who is pursuing who?’ That leads to lots of shades of gray.”

With stories like Stephen King’s Firestarter and adapting Halloween Kills for David Gordon Green’s sequel, Weems knows it’s about the worldview that determines how audiences see the characters. “What’s the greater truth in our lives?” he asks. “Is it that evil is a real thing that can’t be defeated on its own, or is that might makes right and good always triumphs over evil? The first is a horror worldview or the second is a superhero worldview. I think the horror films are a more honest telling of the world.” 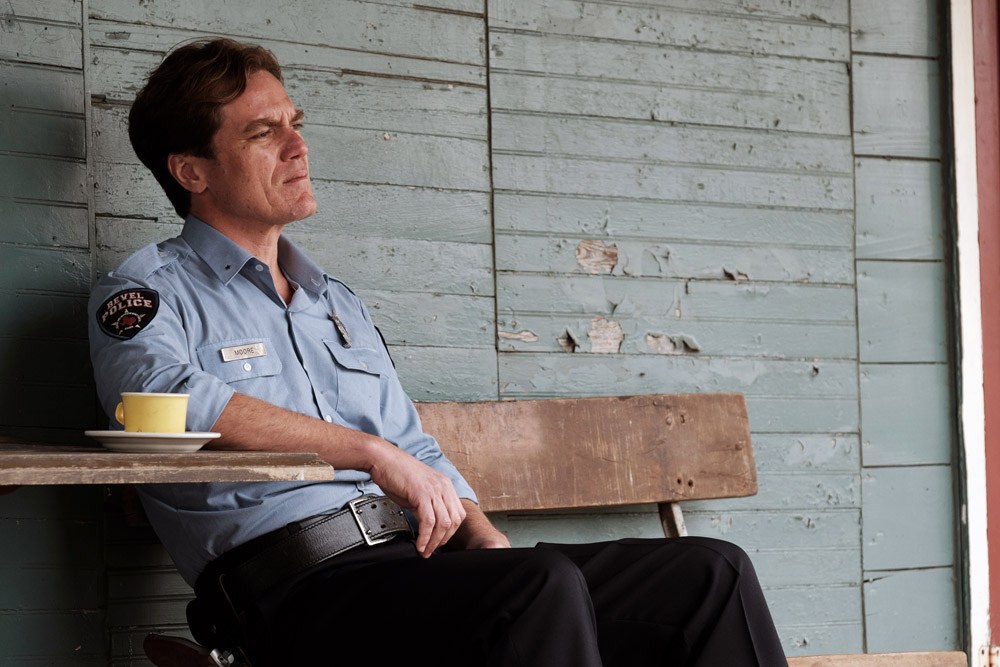 While the violence of The Quarry isn’t excessive or prevalent as it only occurs in two primary moments, it is horrific because it seems to come from an organic place, a recognition that the characters are real people with real motivations. Those motivations drive the unnamed preacher and the law man; they also drive the secondary characters impacted by the circling dance of the two men. Just don’t assume that you’ll be able to determine easily who the heroes and the villains are.

Set against a dusty landscape marked by the life of the church and violence, which sometimes collide, master actors Whigham and Shannon carry the story, Weems proposes. “You’re not going to find better actors than Shea and Mike to carry a story because they have gravitas that grounds them, pulls you in, and engages the characters without judgment. There’s lots of gray with both of those guys.”

Weems realizes that the images they present often carry across labels and boundaries. “Blood is violence, faith, so many things. The earth works the same way. The violence and the beauty of the cross. All of those ideas are instantly beautiful to me. That’s what grabbed me about the novel – that it’s innately visual. Men, violence, and religion are so dear to me, and showing where they collide allows us to ask questions.

One such question that the film wrestles with is, who can be forgiven? Weems says that having audiences leave with those questions is a victory for him as both writer and director. He doesn’t want to inform us, but to draw us into the conversation.

“The point in telling stories is to ask questions and make you think,” he shared. “I wasn’t interested in giving answers but having people ask questions about things like forgiveness.. That’s a huge piece missing from our society, that you might need to be forgiven. So that’s a huge step to get someone to consider. I don’t want to convince someone of God’s goodness but I want to get them to consider that there is a God and if there could be a relationship there.”

In little bits and pieces sprinkled through the story Weems spins, we can see those questions, as Whigham’s not-pastor preaches his first sermon on I Timothy 1:15, and as he struggles to explain forgiveness to others. All of these little nuggets are on purpose, out of Weems’ love for Scripture – what he calls the powerful directness of it mixed with its own absurdity.

“The Bible is so strange and beautiful and weird and dark and lovely, all of those things, like life.”