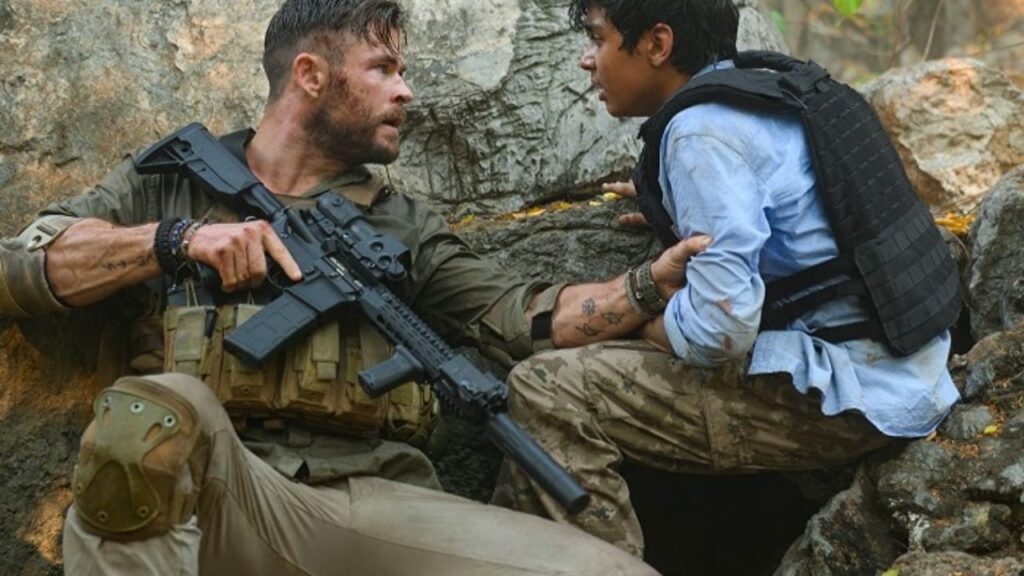 Extraction, the Netflix action thriller that drops April 24, has incredibly theater-worthy credentials behind it. The film stars “Thor” (Chris Hemsworth), was based on a screenplay by Joe Russo and produced by the Russo Brothers (directors of Captain Americas Winter Soldier and Civil War, as well as Avengers: Infinity War and Endgame), and directed by Sam Hargraves (Chris Evans’ stunt double before ascending to stunt coordinator). Against a grungy backdrop shot in Thailand and Bangladesh, the film delivers a John Wick-meets-Jason Bourne death march as Hemsworth’s mercenary Tyler Rake fights against his own demons and dozens of violent attackers to rescue a kidnapped Indian teenager named Ovi (Rudhraksh Jaiswal).

The film is certainly a love letter to the style of 1980s and 1990s action flicks like Commando, Big Trouble in Little China, and Die Hard coming to mind, with allusions to Man on Fire or Children of Men, and enough step-by-step elements that feel like they were designed by a video game producer. There are some funnier moments – when a guy named Rake fights off two attackers with a …rake, or when Ovi points out to Rake that his satellite phone is loud so he knows all of the details that were just surreptitiously communicated. But the film begins with the images of the ravages of violence and then flashes us backward to the moments when Rake was recruited for this suicidal rescue mission.

Hemsworth as Rake isn’t burning a completely new path, even if the cross-cultural piece (half of the film is in Hindi). One may see Hemsworth in a new way, but one has to think that post-Avengers, that he is looking for that reinvention. Yes, he’s done Men in Black International, Rush, and Blackhat, but this is the first film that feels like Hemsworth is getting to stand out as the “one, true star.” It’s the kind of vehicle that new series’ are born from as the audience adjusts to the actor without the beard, the hammer, and the on-again, off-again missing eye. Just wait until he moves himself to the point of The Rock or Vin Diesel with his version of The Pacifier or The Tooth Fairy. He’s just not quite ready for the family friendly version. 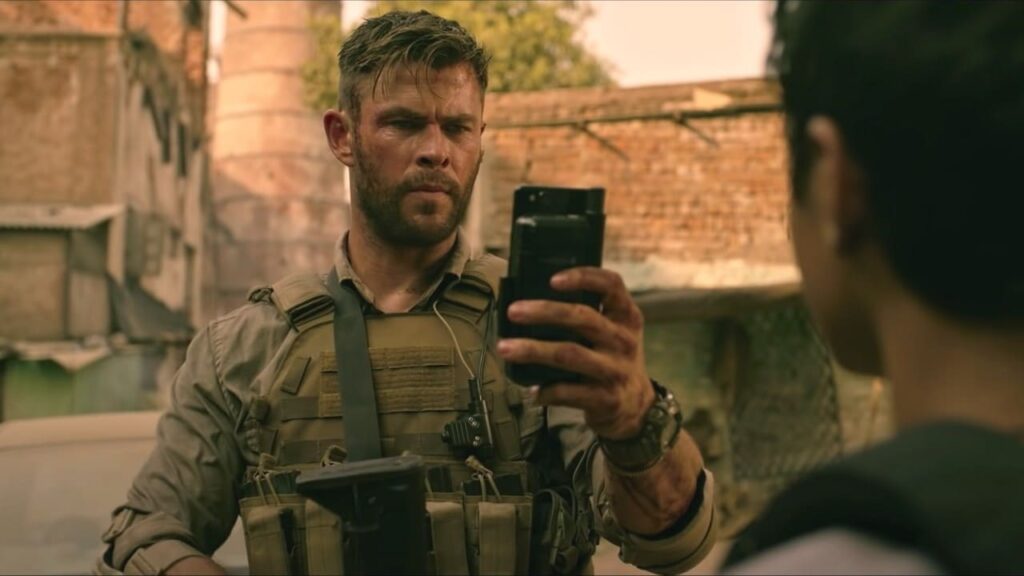 Some of the knock-down, drag-out fights are ridiculous (falling two stories to the ground, getting hit by multiple cards and rising to fight again) and fantastic (a pursuit sequence that is shot to appear like it’s continuous with no cuts). Some of them make Hemsworth seem like he’s a combination between Thor and Captain America, but that’s what they were going for here, in a counter cultural John Wick-ish world. It’s voyeuristic pleasure for those seeking an action release from the grind of quarantine, and rather genius of Netflix to reveal this film into the void that the quarantine has created in theaters.

And yet, for all its blood spatter, profanity, and gun play, there’s a thread of redeemable consequence tying the whole thing together. Rake and another mercenary sent by Ovi’s father both have parental issues they’re working through as they try to rescue another man’s child (he can’t rescue his own kid because he’s in prison). Rake’s fatherhood issues are treated as memories (we assume some sort of major tragedy) and the Indian mercenary is trying to get his hands on Ovi to keep his own son from being executed. Rake seems like the one guy who believes that saving another man’s son is the right thing to do even if there’s no money in it. The mission plays out like a rescue mission but it’s really about redemption and restoration for the two mercenaries, more than just a money grab or a career move. Rake is a man on fire, and it’s only a question of how long, and for what, he will burn.

Stuck in the middle is this kid Ovi, who might be the “pure of heart” character that the other characters are compared against in a story like this. He’s the one who still believes that the world could be good, that people might actually prove to be honorable like he believes they might be. He’s the one who stops to ask others what’s wrong with them, to care enough to ask the stories to let people enter into confession and clear their souls. It’s Ovi who points out that “you don’t drown by falling into the river but by staying submerged in it.” It’s Ovi who provides the opportunity for redemption – it’s just that not everyone really wants to be saved, and some believe they’re beyond saving.

This is too violent, too profane, too much to earn a Dove Approval of any kind, but for those who like their stories of redemption bathed in blood and told at full throttle, Extraction has something to offer in the midst of the pandemic.