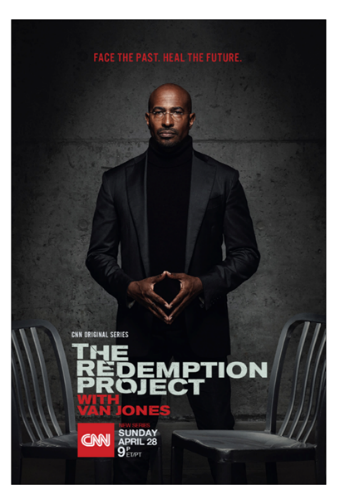 The prison doors slide shut behind Anthony “Van” Jones, the fifty-year-old author, news commentator, and attorney. No, he’s not guilty of a crime, sentenced to time behind bars. Instead, he’s making one of a his many trips behind bars to visit those imprisoned, justly or unjustly, and this time, he’s taking his audience with him for the eight-episode CNN series, The Redemption Project.

As co-founder of several nonprofit organizations including the Dream Corps, Jones has advocated for coding training for kids and clean energy. For twenty-five years, he’s also pursued the criminal justice system, seeking ways to further the transformation in people’s lives, even behind bars. With his latest series, he wants to change the trend he sees in our overall understanding of possibilities, as he’s watched “grace, empathy, and caring flee our culture.”

The CNN website for the show proposes that “restorative justice repairs the harm caused by crime,” stating that victims, offenders, and community members choose to meet together, emphasizing accountability and making amends. The site adds that when these groups choose to meet that “the results can be transformational.”

Director Jason Cohen found himself nominated in 2014 for an Academy Award after filming the story of Facing Fear, a documentary about a former Neo-Nazi and his victim who explored forgiveness twenty-five years after the crime. While Jones was experiencing a call to share the stories he was seeing in prisons, Cohen was gaining traction telling these powerful stories, so the two teamed up to film the interactions of eight perpetrators of violent crimes and their victims (or close family members). Cohen’s storytelling abilities and Jones’ connections were the right mix of connections to put the series together, even though Jones admits that none of the process was easy.

“Every one of these things is a rollercoaster,” shared Jones with a chuckle. “At the end of the process with the episodes, we’re left with these eight shows that seem so tidy looking at the final product, but any one of them could have come off the rails. Would the victim or survivor agree to meet? Would the prisoner?”

Each side has their own set of questions and things to say, Jones explained. While the news reports on the crime and the trial, the victim(s) and the offender rarely actually interact. Sometimes, the family doesn’t know what actually happened to their loved one, especially in cases where the person was killed, or why the offender acted against their loved one. The offender is often genuinely sorry, but never has the opportunity to share that with the family.

“The family has simple basic questions sometimes, like what they might have had the first minute they heard of the crime. So the person who is the victim or the surviving family member can be in a prison themselves. The only person who has a key is the person behind bars.”

Jones shared that in every one of the eight stories that he’ll share on CNN, that faith played a part on both sides. “Most of the time, it’s people of faith on both sides who are willing to take the chance [to meet]. You’re going to hear the word God on CNN more on my show than you’ll hear the rest of the week!” he said, laughing. “People walking with the pain or the pain of remorse often turn to faith. As a person of faith, I was insistent that we not remove any of that, clean it up or secularize it. These people are relying on prayer to make it through.”

Audiences may be surprised to find out that more often than not, the victims or their families are able to move past their pain to forgive. Jones pointed out that in several cases, the meeting moved the victims to get the offenders released from prison! Even after decades of working through these kinds of situations, Jones admitted that the show had impacted him, too.

“It’s made me much less judgmental. It’s made me be less a part of the blame and accusation culture that has taken over our politics. I was going in and out of jailhouses and seeing miracles happen. Just for the courage for a person to walk in and speak to the person responsible for their pain is a miracle,” proposed the analyst. “Those are moral miracles in the most difficult of circumstances.”

Audiences who find themselves drawn to Jones’ show on CNN (premiering Sunday, April 28 at 9 p.m. ET) will be challenged by Jones, who is also the CEO of the Reform Alliance, to pursue fairness in the court system for all after seeing the show. “We have to allow for the humanity of each other, for the mistakes of each other, that someone might have done something very bad but it doesn’t define who they are, to find the awesomeness in each other, and to find a way to help each other.”