In the latest Marvel series on Disney+, the Marvel multiverse is explored from different vantage points. Instead of the signature moments that happened, making the great heroes legendary, something else happens that diverts the pattern in What If…? Continuing a grand tradition in the printed comics, fans old and new can experience what possibilities could happen – and consider the moments in their lives when they became who they were supposed to be (or were saved from a troubling experience)) thanks to the solid storytelling and detailed animation.

In the first episode, “What if Captain Carter was the First Avenger?” shows what would’ve happened if the Hydra spy had prevented Steve Rogers from becoming Captain America and instead Sharon Carter had been forced to take up the mantle. In spectacular fashion, Hayley Atwell’s animated Peggy Carter-turned-Captain Carter defeats Nazis, teams with a non-Super Soldier version of Steve Rogers (Josh Keaton), and does her best to defend the world from evil. Sebastian Stan voices Bucky Barnes, Dominic Cooper voices Howard Stark, with Samuel L. Jackson, Jeremy Renner, Neal McDonough, and the late Chad Boseman reprise their live-action characters as animated heroes as well. 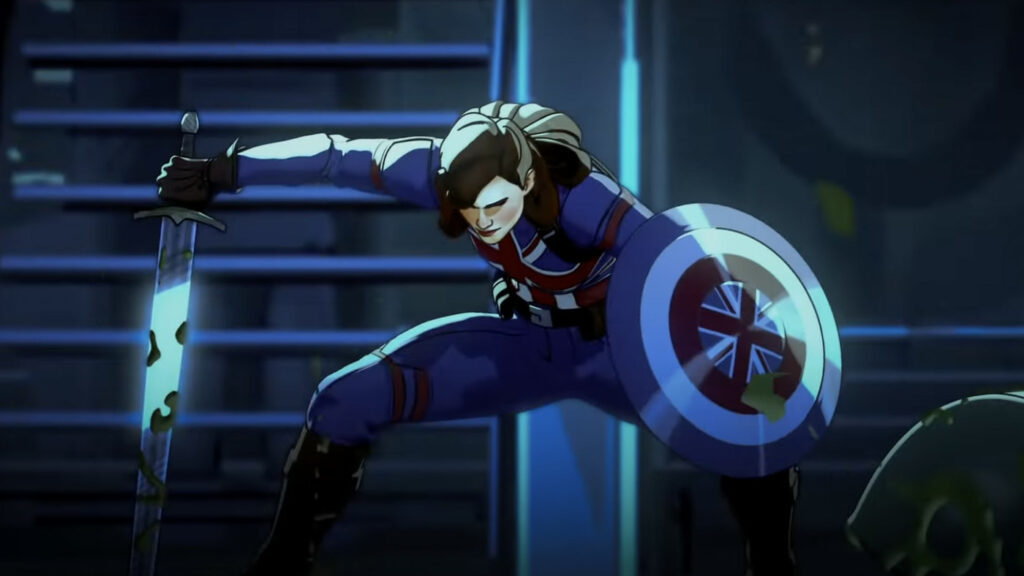 There’s a real beauty to seeing Captain Carter prove that a woman with Super Soldier Serum can be as effective, if not more, than Captain America, fighting off the misogyny of the likes of military politician John Flynn (Bradley Whitford). But let’s be real – the audience wants to see Captain Carter take on Ross Marquand’s The Red Skull. Skull’s Hydra is just as evil and terrible as it is in the live-action films, but the beauty of the animation from Stephen Franck makes the stories even more approachable for younger audiences.

Released one episode at a time for nine weeks, the first season already has spawned a second season in development. Over the course of the next few months, fans can expect to hear the iconic voices of Angela Bassett, Josh Brolin, Don Cheadle, Benedict Cumberbatch, Benicio del Toro, Michael Douglas, Jon Favreau, Jeff Goldblum, Chris Hemsworth, Michael B. Jordan, Kurt Russell, and others, highlighting the use of beloved characters like The Hulk, Doctor Strange, the Guardians of the Galaxy, and Ant-Man. Who knows where the episodes will take us!?!?

The truth is that there are plenty of what if issues in our lives. What if we didn’t go to school or pursue the career we did? What if a loved one didn’t die or had died? What if we didn’t meet the person who would ultimately become our spouse? Our worlds would be significantly changed. But there are even bigger ones, too: like what if God had decided to wipe humanity off the map for its sinfulness, or determined that Jesus’ death was too great a cost? What if Jesus had not been obedient to death on the cross and just walked away?

While the beauty of these fantasies is that they are imaginative and fantastic, they serve as a good reminder of how we should evaluate our lives, seeing the opportunities God provides us and being thankful for the mercies we see and the ones we don’t.

What If…? Episode One contains some minor profanity.