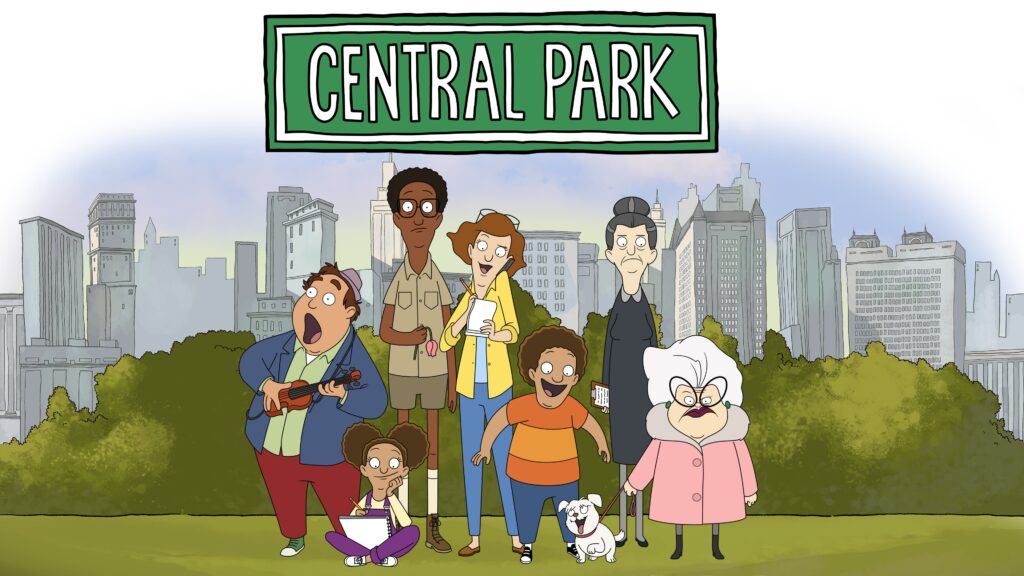 In the midst of a pandemic, the true character of people has been revealed by the crucible of the situation, by their level of panic, compassion, and resolve in the midst of unseen forces. How do they treat others? What do they value? When push comes to shove, will they prove resilient? In the AppleTV+ original animated comedy Central Park, creators Josh Gad and Loren Bouchard (Bob’s Burgers) are asking questions about what it means to be human in the midst of community, with Manhattan’s famous urban park as the backdrop.

In the comedy, Gad plays the unreliable narrator Birdie, who literally sings his way around the park, telling stories of the inhabitants. At the center of all of this is park caretaker Owen Tillerman (Leslie Odom Jr.), his journalist wife Paige (Kathryn Hahn), and their biracial children Molly (Kristen Bell) and Cole (Tituss Burgess). They are the “good” guys, even while periodically confused or misguided in their efforts, as normal people are but selflessly; on the other side is the nefarious Bitsy Brandenham (Stanley Tucci) and her assistant, Helen (Daveed Diggs). The Tillermans exist in a world where people can come and enjoy the Park, while Brandenham represents some rich entrepreneurs who want to buy up the park and sell it for profit. Egads!

Four episodes in, the show is musical, witty, whimsical, and laugh-out loud funny, with a tendency to err on the side of immature. Just don’t assume that everything is put out there just to draw a wry chuckle from the audience.

With songs like “Weirdos Make Great Super Heroes,” Bouchard says that the underdog is elevated but there’s more going on than just putting “bright colors on the screen and making a few people laugh.”

“We imagined a world where the park itself is fragile and needs to be protected,” he shared recently in a quarantine-influenced digital roundtable. It’s a world that looks different than it did a few months ago, when they were recruiting friends of Gad’s to do things like play an old lady as Tucci does. Even while they were drawing the beauty of the trees and flowers, and balancing it with the cracks in the sidewalk and the gum stuck to the pavement, they were capturing the look and sound of a city park that’s now the site of a Samaritan’s Purse hospital.

“Central Park is a place that we all feel like we know even if we’ve never been there, and it’s big enough that we can tell lots of stories. The caretaker’s family worried about the sprinkler heads and the trash pickup. It felt like a unique place to tell stories – even more iconic responsibility with people from all over the world.”

And yet, now, it means even more, doesn’t it?

“I like thinking about [where we all fit] even in the midst of Bob’s. What does the restaurant mean to the town or the street it’s on? With Central Park, we start from a bigger place – we were excited about telling the story and we realized it didn’t feel like it was fragile enough. Because we get to invent the reality and tweak it, we decided to use a villain who was bringing blood money from all over the world with shadow investors to bring our characters up against it. What does it mean to preserve public space? In the middle of the pandemic, it feels even more fragile when we realize it in the midst of this. It feels like a good story even in the best of times, for those making it but then there are people who are really struggling and this is a reminder of the tension.”

With just a few weeks to the airing of the first episode, Bouchard remembers experiencing the first time they showed clips of their creation to the Apple executives. He remembers their excitement, and the moment that they connected with the story in the way he had.

“Apple was really excited about the show. We had this blessed experience of making a few minutes of animation and then just experiencing a thrilling emotion in the room – I had been so close and got to see it through someone else’s eyes. It was beautiful.”

Now, fans of Bouchard’s and Gad’s will have to wait and see, if they too can feel the magic of a stroll through Central Park.