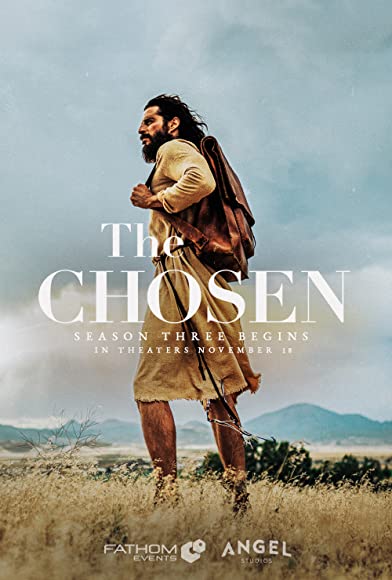 After Jesus delivers His pivotal Sermon on the Mount, word continues to spread about His ministry, gaining more attention from His followers and provoking the watchful eye of Roman authorities, who aren’t quite united in their approach. Jesus’ disciples and closest friends open their arms to His newest follower, Judas, while learning to live and work with and do two-by-two ministry with one another. Thomas and Ramah’s relationship continues to grow while Simon and Eden discuss how their future family life can coincide with his ministry commitments.

Season Three of the popular series “The Chosen” begins right where Season Two left off: at the Sermon on the Mount. Jesus delivers His hard-hitting, counter-cultural message as thousands gather and are impacted by it. As He preaches, flashbacks into the histories of various characters underscore how it is impacting them. Matthew, for instance, remembers a heartbreaking moment with his parents and is confronted by his teacher’s words to forgive and show mercy.

Coming down from the Mount, organizing the future plans of the ministry is at the forefront of discussions, with a starry-eyed and optimistic Judas coming on board to handle finances. Also, blueprints are being laid out for an upcoming two-by-two ministry, pairing up some of the more unlikely duos, such as Matthew and Simon Z. Two romantic subplots revolve around Thomas gaining the nerve to ask for Ramah’s hand in marriage and Simon Peter and Eden talking about a possible expanding family and seeking a way to have some alone time in the middle of so many extra houseguests.

“The Chosen” continues to paint a colorful and grounded picture of the time of Jesus’ ministry. Unlike the glorified view many hold of them, the disciples are portrayed as not always being on the same page and frequently concerned about the authority Jesus is handing over to them. They wonder if they will be enough to preach, deliver, set free, and heal without Him being right there. They believe in Jesus, but now they are venturing further down the difficult path of trusting Him.

Spoiler Alert: Similarly, a tender moment between Little James and Jesus regarding physical healing is one that will touch hearts and provoke discussion. Is it God’s desire to always heal someone? Or is there a purpose for someone serving God through their weakness and infirmity? Viewers might also sympathize with James’ emotional turmoil of whether or not his need is being ignored for those who seemingly have more important needs. It becomes the most captivating and provocative moment of Season Three so far. This movie has earned the Dove Seal of Approval for 12+.

As the third season releases, “The Chosen” isn’t yet to its halfway point, but Episodes 1 & 2 show a visual upgrade in its already impressive production value while deepening the threads of plot development and social relationships. These are characters, mostly historical, that viewers are getting to know and love more and more, so knowing what we know about their future, some very intense and even more heart-wrenching moments lie ahead.

“The Chosen” is a grounded and fleshed-out look on the earthly ministry of Jesus. It’s mostly the Bible come to life, so biblical themes and concepts are its core plot line. These episodes in particular center on healing, trust, authority, and evangelism.

Lives are transformed when they come in contact with Jesus, including the newest follower Judas, who leaves everything to join the disciples. Disciples also face internal struggles of whether or not they are worthy and have the authority to represent Christ.

In a comical subplot, Simon and his wife Eden attempt to enjoy each other’s company after a long absence but are continually interrupted by fellow disciples looking for a place to stay.