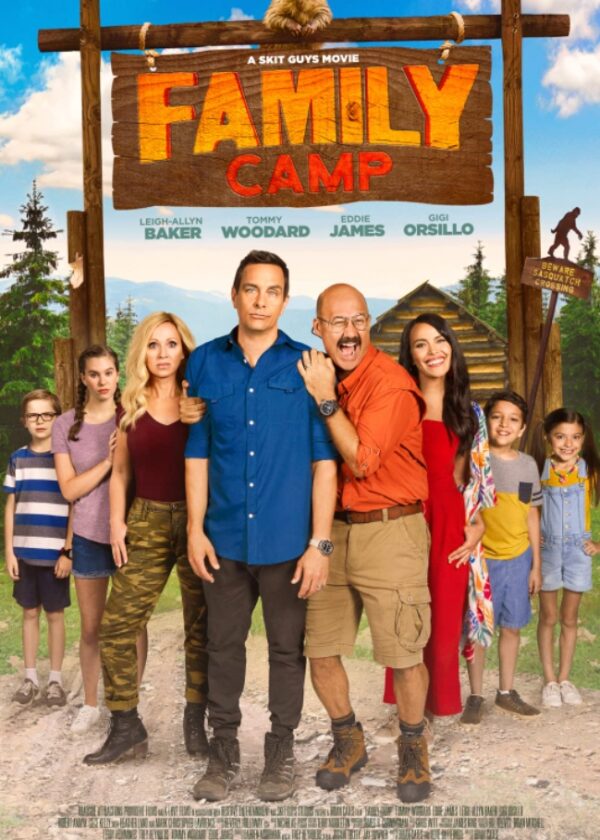 When two polar-opposite families are forced to camp together, the dads struggle to hold onto their families and marriages as they compete for the coveted camp trophy.

In this new Skit Guys film, Grace Ackerman (Leigh-Allyn Baker), quirky but stubborn wife and mother, is certain that by immersing their family in a summer, church camp, her husband Tommy Ackerman (Tommy Woodard), will finally be forced to spend quality time with her and the kids, teenager (Cece Kelly) and boy (Jacob Wade). Typical little brother/teen sister fights are humorously familiar as the family drives to the place Tommy was absolutely sure he would never go- Church Family Camp!

Upon arrival, the camp director (Robert Amaya) happily advises the Ackermans they will be sharing a yurt (a circular domed tent used by pastoral people groups in inner Asia) with another family, (who could be described as melodramatically absurd). Too soon, the Ackermans meet the Sanders. Eddie Sanders (Eddie James), father and chiropractor, in a fit of happy histrionics, snatches Tommy and Grace for an extremely funny, spine-popping adjustment. The Ackermans quickly find Eddie’s lack of humility is superseded only by his theatrical ability to annoy. Eddie’s wife, Victoria Sanders (Gigi Orsillo), maintains the weird energy on her end as their young twins (Elias Kemuel) and (Keslee Blalock) keep a safe distance from the parent group.

The prophetic writing on the wall comes dreadfully for Tommy when Eddie and family joyfully sing How Great Thou Art to, “offer up a humble hymn of praise and to consecrate their yurt as Holy Ground”. This is humorous, and although it may give off warnings that Family Camp makes fun of hyper-Christians (kind of like Homer Simpson’s neighbors). we should be quick to realize there’s a strength in the ability to laugh at oneself, as do the Skit Guys. Some viewers will recognize the Ackermans’ characters, who tend to look like the preoccupied, under-committed Christian, periodically attending church, but unsure of the words to How Great Thou Art. You know, “How-great-thou-art …”

The film perpetuates itself by rolling through one pie eating, paddle boating competition after another, each pushing Tommy closer to an all-out-camper-war with Eddie, whose sense of putting others first, bounced far, far away in a blue Bubble Ball. Sub-stories are woven in, one being the chewing presence of an odd little beaver (created by David Acuff), reminiscent of the dancing gofer in the movie Caddy Shack. Other interactions center around the issue of maintaining rewarding family time; Pastor Dave (Mark Lawrence) makes time to counsel Tommy on leading his family.

Another situation involves a men’s deep-woods hiking trip. When Eddie and Tommy get lost together (you know they’re going to), all focus turns to finding them. Everything we might expect happens when Eddie grabs a bee hive and puffs up like a porcupine, when their clothes are burned by the campfire, and when they are captured by two backwoods, nutty survival guys (Myke Holmes and Weston Vrooman). All in all, a bad day.

Meanwhile back at camp, Grace confides in Victoria her need for Tommy to give their family priority over his job, prompting Victoria to divulge her marriage problems, then offering to pray with Grace. “I’d like to pray in my prayer language,” she tells Grace, who stammers, “You mean in … tongues.”

Family Camp is the product of clever writing, acting outside the box and just plain ol’ hav’n fun. The back woods craziness is a little long and takes on an extended life of its own. No worries; Skit Guys fans will love that. Cinematography and directing, along with the score and set, create an awesome camp experience. There are no objectionable elements, past the rating of 1, in this clean and funny family film. We do learn about consideration for others, the importance of family and honesty, and confessing and confronting weaknesses. Dove awards Family Camp the All Ages Seal of Approval.

The popular, comedic, Christian team known as The Skit Guys, brings us Family Camp, a well-produced, well-written and acted film produced to entertain both secular and Christian audiences, one hearty laugh after another.

Christian jargon, devoted prayer, but no noticeable true sharing of the Gospel

Main characters have different levels of integrity, some just wanting the best for their family, while others want best for themselves.

Situational things like the nutty guy shooting a drugged arrow, and a campfire out of control