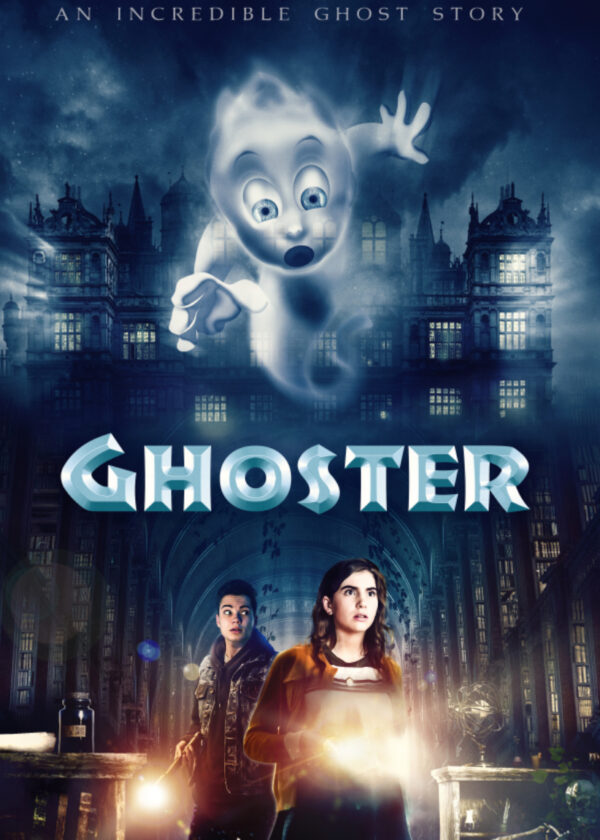 An inquisitive girl and her father must unravel the secrets of Echoville Manor which has held the world’s cutest spirit Ghoster captive for 50 years, before Yuto the ghost dragon wipes them all out in his quest for immortality.

Ghoster opens, as a small ghost boy, Ghoster (voice by McKenzie Irby), races the light of a full moon, in a desperate attempt to seize and destroy a magic diamond being housed in the upper rooms of the famous Big Ben clock.  If he can do this, he believes other poor souls in the Big Ben attic will be released. He is met instead by his eternal nemesis, the ghost dragon Yuto (voice by Cory Phillips).

Far away, or perhaps not so far, Elizabeth (Sophie Proctor) and her father James Oren (J.R. Brown) are still trying to cope with the loss of Abigail (Christy Tate), Elizabeth’s mother.  Matters get worse as we find the bank has served the family an eviction notice. But oddly, the same day, Elizabeth receives a mysterious letter naming her as the sole person to inherit a mansion called Echoville Manor.

Bills are piling up and Mr. Alessi (Marlon Ladd), the bank’s foreclosure officer, doesn’t hesitate to give James an unfriendly reminder the bank can seize any asset, including his daughter’s newly acquired Echoville Manor!  Begrudgingly Mr. Alessi extends James  one month to repair the house, and list it for sale.

But soon we discover different parties are interested in Echoville Manor, including one little ghost boy, Ghoster, who is trapped between two realms in this 1685 mansion. A mysterious man with a suitcase of money, a ghost dragon and neighbor each has interest in Echoville as well.  But why?

Ghoster proceeds to demystify himself, revealing he is William (Michael Burgess), the seven-year-old who died in Echoville 50 years ago. The ghost tale intensifies, but unfortunately is bogged down by scenes that unnecessarily add minutes to the film. Scenes like an extended bicycle chase through town that serves to display Mateo’s (Josh Escayo) bike skills.  After the long intro, Mateo becomes part of the Scare Squad: Elizabeth, James, Mateo, a neighbor Connie (Rachel Whittle) and Ghoster. Their mission — to scare the bank biggies from seizing the spirited home before the next full moon. And why the next full moon?

Ghoster explains the light of a full moon must hit a special painting being stored at Echoville.  This will open a door of laser illumination, and usher the ‘passengers’ into a vaulted, medieval space where deadly games must be played correctly in order to acquire a special, emblazed sword.  This sword is the sole power able to crush the diamond of light, which would annihilate the evil ghost dragon, releasing trapped souls.  Whew!  Nothing’s easy around here!

Ghoster’s production values are, for the most part, very good. However, the dialogue  scenes between actors run slow, adding extra time; run time is 2 hours, 30 minutes. The better acting is credited to minor characters such as Mr. Alessi and Mr. Lee (Cory Phillips). There is extensive use of CGI (computer generated images), allowing Ghoster to hop between paintings and mirrors. The mansion sets and decor are believable and the vaulted room of knights’ armor nicely adds another needed dimension. However, we immediately notice the dragon is a copy of Smaug of The Hobbit, in its movements, speech and bad breath. And taking from The Chronicles of Narnia, the characters pass through a special door to enter another realm.  There are other ‘similarities’.

Note to families who don’t do ghosts: This has “Ghost Content” all over it. Outside of the slithering, laser spewing dragon, which may be considered a frightening image for smaller children, the imagery and content are mild. Dove awards it the Seal of Approval for Ages 12+ to Ghoster.

Ghoster is a magical story, replete with ghosts, magic mirrors and a huge haunted house, yet many scenes struggle to maintain a pace that keeps our attention.

Ghoster seeks to stop the dragon from imprisoning souls.

Boy comes close to falling in a pit of fire. Dragon uses electric or magic laser to injure others