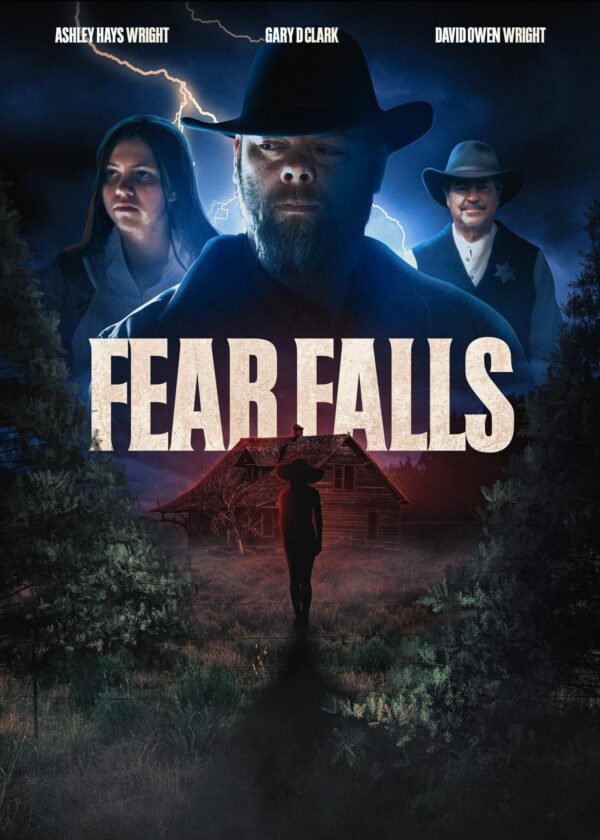 One girl in a small remote village will lose her last living relative and have to manage the farm on her own. She is haunted by a creature in the woods, and havoc begins to spread throughout the village of Fear Falls.

A village named after a tragic beginning, will now be faced a new fear. The Pastor is forced to take up a new job as the Sheriff and investigate a mysterious death. Will the village be devoured by fear?

This is a spooky film for Christian Families with a powerful message on fear.

Fear Falls is a creepy (at times), suspenseful movie that features a bit of mystery and edge-of-your-seat suspense; but is crowned with the wonderful story of God’s love. For anyone who has ever faced fear, this movie makes it shiningly clear that it can be overcome.

The film opens with a dark scene in the woods at night, an old house, an owl hooting, and a young woman lighting a candle to read a book. Next, we hear creaking noises. The young woman, Margaret (Jaina Wright), loses her grandmother, and the blow to the back of her head makes folks in Fear Falls suspicious. Some even wonder if Margaret killed her own grandmother.

Enter Pastor Murphy (David Owen Wright). When the local sheriff, Henry (Gary D. Clark), decides it’s time for him to become a circuit minister, he resigns and deputizes Pastor Murphy to keep the law. Murphy is not crazy about both pastoring and maintaining the law, but it’s either that or have everyone in Fear Falls live in fear.

With forbidding sounds, and the belief in a “leaf creature,” that seems to appear to some like a moving tree covered by leaves, the town’s fear is high. And a local Christian woman named Maryanne (Ashley Hays Wright), butts heads with Sheriff/Pastor Murphy, when he cancels church services for the time being. “I never heard such a thing!” Maryanne raves. “Sounds like you just did,” replies Murphy. She tells him she doesn’t think it’s right that “a man of the cloth picks up a pistol.” “And perhaps I think it ain’t right that a woman isn’t married!” The banter between the two is interesting because it’s obvious these two have romantic chemistry, and, in fact, the couple is really a couple in real life!

The movie features a remarkable music score, which really captures the various scenes including “eerie” music, “apprehensive music,” and lighter music. The music is done by Rich Kollenberg, and Ashley Hays Wright not only directed the film, but sings some of the songs and she has a terrific voice. She nails the songs she sings including a powerful performance of “Amazing Grace.” In fact, Ashley and husband David are two of the more seasoned actors in the film and they shine. One of the songs, which plays during the credits, by a male vocalist, includes the lines: “Yes, I know He’s the one, the only one! I’ve got a Savior.”

The film does a good job in showing that a little natural fear is normal, but that God doesn’t want us to live in fear. Another positive element of the story is Maryanne’s continual working on Margaret, helping her to realize her need of Christ. Margaret lost her parents — they were murdered — and she discovered their bodies. Maryanne relates as she lost her parents to scarlet fever.

Without spoiling the ending, we can tell you that Pastor Murphy eventually holds a church service, and the close-up of the cross is a nice visual shot. Also, the pastor gives a stirring message, reminding the congregation that fear is not of the Lord, and God will bring the fearful out of darkness.

Without giving the ending away, the mystery of what happened to Margaret’s grandmother is explained, and Margaret begins a new walk of faith. The scripture from Psalms 27 is displayed on-screen: “The Lord is my light and my salvation; whom shall I fear? The Lord is the strength of my life; of whom shall I fear?”

Due to the eerie music and atmosphere, we are awarding the movie our Dove seal for Ages 12+, with the caveat that it has earned it as it does indeed point to Christ as the one and true savior. And the Christian music and sermon in the film is terrific.

For those who like a bit of mystery and suspense, but with a Christian theme, this is the movie for you!

Christian songs; a sermon; scriptures on screen; the idea of accepting Jesus as your savior.

People offer to let a scared young woman stay with them; people who love God look out for one another and a pastor/sheriff tries to learn what happened to an elderly woman who died.

We learn why a woman had a gash on her head; a man shoots a rifle out of fear, but no one is harmed.

Images of a moving tree with leaves, but is it in a person’s mind? Fear by some people; eerie music; disagreement between a few people; death and grief.