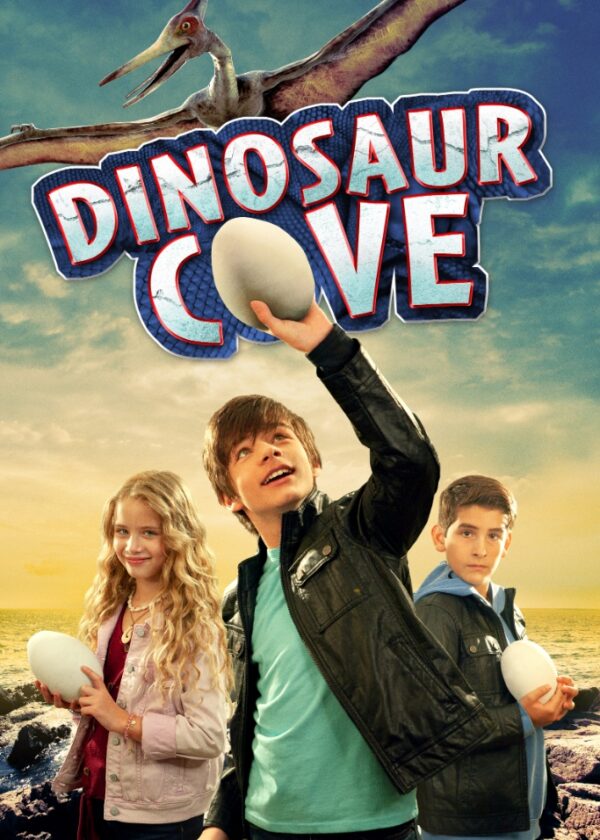 Reeling from the recent loss of his mother, Riley Harrison claims he has seen a real dinosaur. His dad, Wyatt Harrison, and Wyatt’s love interest, Dr. Starr, quickly write it off as a coping mechanism for his grief. Villains Mr. Bigg and Dr. V are responsible for the creature and its accidental release, and now try in desperation to recover it and capture young Riley before the public finds out about their diabolical plans.

This movie kept my interest throughout, which is the ultimate compliment. Between the interesting plot about a flying dinosaur, a pterodactyl, and a boy who is determined to protect the mother’s eggs, the story moves at a quick pace. Add Dr. V. to the mix, short for Vandersaurian, played hilariously by James Pilachowski, and a bit of romance between the characters of Wyatt and Dr. Theresa Starr, and you have one engaging story.

Izzy Luther, portrayed by Emily Buckner, is Dr. V.’s assistant, and she tells him exactly how long she’s been with him. “Two years, six months, twelve days, five hours and twenty-three minutes,” she quips. “That’s a little disturbing,” he tells her.  She wants to inform Mr. Bigg, the supplier of their research funds, about an error they encountered. Mr. V. asks if in any of their time in working together if they have ever informed Mr. Bigg of an error. Izzy replies, “Never.” “Ding, ding, ding!” proclaims Mr. V. “Give that girl a prize. Right, never! Never, Miss Luther.” Pilachowski’s over-the-top performance is funny and delightful. In one scene, he uses two dinosaur puppets and has them talk to each other in funny voices.

The story opens with a writer, Wyatt Harrison (Jared Withrow), and his son, Riley (Brayden Eaton), traveling to spend time with Wyatt’s father, Riley’s grandfather, following the death of Wyatt’s wife, Lily. Both Wyatt and Riley are still hurting over the loss of their wife and mother.

Grandpa welcomes them with open arms and Riley soon makes some friends with a girl named Savannah and a boy named Mark. Mark has a golf club with him and smacks a golf ball, which winds up shattering a neighbor’s window. He immediately places the club in Riley’s hand and runs! The film dances back and forth between humor and drama, and the humor is seen in the opening sequence when Wyatt and Riley are passing the welcome sign, which says, “Welcome to Dinosaur Cove, have a roaring good time!”

Wyatt tells Riley that Dinosaur Cove earned its name when previously some dinosaur fossils were found on the location. Previously to this, it was called Buccaneer Cove, due to a legend about pirate treasure being there. Wyatt says his new book is based on this story.

We soon learn that Dr. V.’s dinosaur has gotten free and flown away, due to a sky hatch being left open. Later, when Riley wanders into the local woods, he hears a noise and the dinosaur flies by him. When he winds up almost falling over a cliff, dangling over a river, a paleontologist named Theresa Starr (Holly Houk), rescues him. He tells her his parents only include his dad, and that his mother is “in heaven.” Theresa winds up meeting Riley’s dad, and there are some sparks. It is not clear at first if they will become close or argue all the time! But there is definitely chemistry between Wyatt and Theresa.

When Riley tells his dad about seeing the flying dinosaur, his dad is skeptical to say the least, and he reminds Riley that dinosaurs have been extinct for a long time. He tells Riley that he too wanted to believe that dinosaurs existed when he was Riley’s age.

When Dr. V. overhears Riley talking about the dinosaur with his dad in a local restaurant, Dr. V. texts Izzy, who is sitting across the table from him! In his comedic way, he becomes upset when she speaks and tells her he wants only texts! The musical score fits the movie well, with a few lighthearted pieces which are appropriate during the humorous moments. And yet also featured is an inspirational song about God hearing us without words, when our emotions are full.

A few good quotes are dropped in the dialog too, such as Wyatt quoting Einstein, who had said it was insane to repeat the same behavior over and over and to expect a different result. Wyatt still has a dream of writing a book that will sell well, his last one didn’t sell many and he tells his dad that his dad bought 300 of the 562 copies that sold! He shares a sad quote when he says Mark Twain once said most men die at age 27, but are buried at 72, obviously alluding to the fact some people give up on their dreams early in life.

Wyatt’s dad helps him deal with his grief when he reminds his son that he will see his deceased wife again. His father also encourages him about the latest book he is working on. “You just keep at it. Get that book written.”

Riley finds dinosaur eggs in a nest and is determined to protect them, while Dr. V., Izzy, and various lab workers desperately try to get them back, even if it means threatening the protectors of the eggs with a rifle.

The special effects are pretty good for the dinosaur, and its baby that pops its head out of the egg. We won’t plot-spoil the ending of the movie, but this is a delightful story with some good performances by the lead actors, and the added story of the romance. Will Wyatt find happiness with Theresa? What happens to the eggs and to Dr. V.?

This movie doesn’t have anything that is over-the-top in content, and it has earned our Dove seal for All Ages, although it’s not intended for very young kids. The idea of life after death, the power of love, and persevering to attain one’s dreams are all lofty and worthwhile themes in the film.

This fun-filled movie will keep your attention and is suitable for the entire family to watch together.

A few comments about going to heaven after death, a song about God hearing us even when we don’t use words.

A dad and son tell each other they love one another and the dad looks out for his son’s safety; a few people want to protect the dinosaur eggs for a good purpose, not to exploit them; a dad encourages his son to keep writing his book.

A gun is briefly held on a few characters, but the scene isn’t very threatening; a few characters are briefly tied up; a lab blows up from a distance with just flames being seen.

A toast of wine near the end of the movie, a man is relaxing with a drink and it’s not clear if it is alcohol or not.

Tension between characters; a dad and his son miss the wife and mother who passed away.