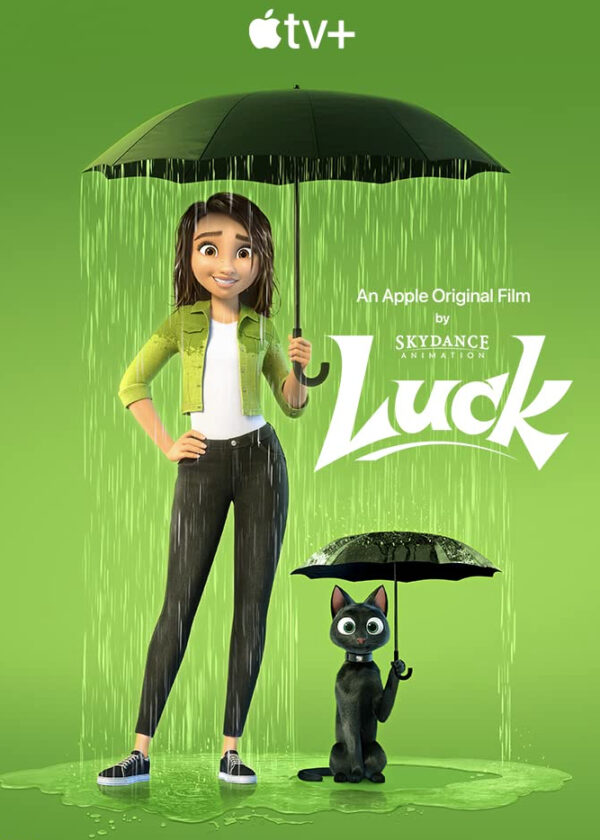 The curtain is pulled back on the millennia-old battle between the organizations of good luck and bad luck that secretly affects everyday lives.

Luck, the newest animated treasure from AppleTV+ is a fun story about Sam, a very unlucky girl who somehow manages to bounce into the mythical land of luck. The world, filled with leprechauns, black cats, and even a dragon, pulls the strings of all the good and bad doled out in the human world. Teaming up with Bob, a black cat on thin ice with the leadership, she sets out to try to get arrange for some of the positivity to fall on her best friend.

While many Christians shy away from superstitious terminology and icons, the film is still a good allegory for what the Bible calls the “rain falling on the just and the unjust.” Bad things happen sometimes, and good things happen sometimes. It would be nice to place God and His providence in the middle of this lesson, but the film still holds some important discussion starters that can be had with kids about how to handle bad days, as well as being unselfish and content. If every day was good, then how would we grow? Trials and hard times, as unwelcome as they may be, build character and make us better.

Sam’s background as an orphan aging out of foster care is also a very significant and frequently unexplored theme for a family movie. It’s remarkably carried out, showing the challenges of the system without getting too heavy-handed or bleak. The story could very well inspire viewers to think of those less fortunate and follow Sam’s example of making it their mission to help. In one scene, someone tells her, “What you want the most isn’t even for you. You want good things for others, and you’ll endure the worst bad luck ever to make it happen.” Sam is a true, selfless hero.

The animation is particularly pleasant, very lush, colorful, and fun, much like the traits of a classic Pixar movie. That may not be coincidental considering former Pixar COO John Lasseter’s role as producer, and even a cameo by voiceover mainstay John Ratzenburger. Simon Pegg brings to life the lovable Bob and Eva Noblezada is memorable as Sam, especially in a fun revamped, family-friendly version of Madonna’s early classic “Lucky Star.” Jane Fonda and Whoopi Goldberg also lend A-list credit as big bosses in the land of Luck.

Luck is a visual treat, with fun, action-packed moments, and a great cast, but even more so it explores important themes such as suffering and adoption in a way that’s relatable and memorable for its intended audience of kids and families.

The film stresses a very important point about embracing suffering as it refines a person into something better.

Sam is a brave, determined and selfless hero who works hard to make her best friend’s life better, even though her own life is marred by challenges.

No physical conflicts, only moments of adventure and grappling with the trappings of the mythical land.