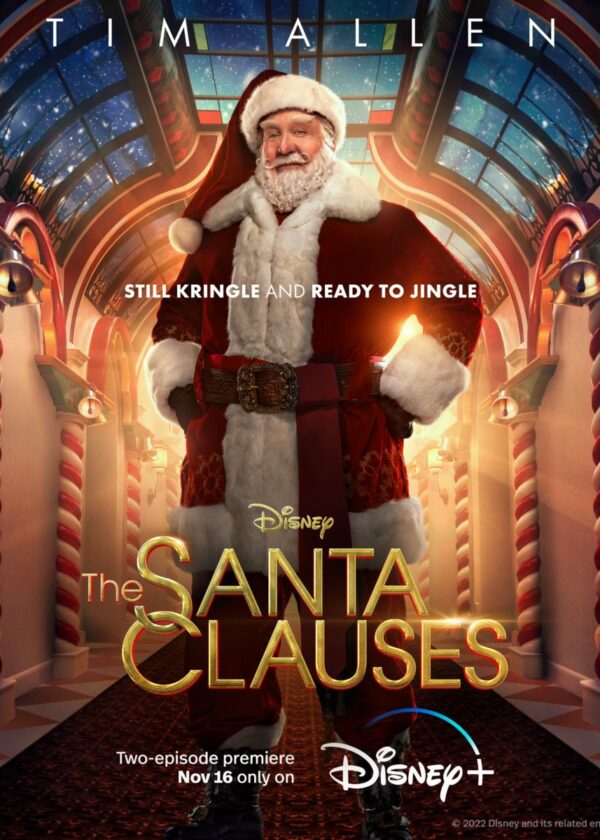 It’s been 28 years since Scott Calvin became Santa Claus. He lives in the North Pole with his wife, Carol, and their two kids, Cal and Sandra, who are now young people. Everything seems to be great, but soon, Scott finds out that he’s losing his magic amidst a world of skeptical people who don’t believe in Santa anymore, and he has a couple mishaps on Christmas. At the same time, Scott learns that his kids are strange and lonely since they haven’t been raised around other human beings, only elves and a magical world. Scott is told that he can retire and appoint a new Santa to take his place. After speaking with his family, Scott passes on the Santa mantle and takes his family back to Chicago to try and live like a normal family.

The Santa Clauses is a Disney+ series that continues the story from the popular Santa Clause franchise from the 90’s with Tim Allen. Allen plays Scott Calvin, the man who becomes Santa Claus after the original had an accident. Twenty-eight years have passed since the original events, and Scott (Santa) has a wife, Carol, and two teenage kids – Cal and Sandra. Cal is lost in his virtual gaming world, and Sandra’s only friends are animals. Scott believes life is great until there are a couple of mishaps during Christmas night, and he realizes his Christmas magic is failing him due to the problems of the world. People don’t believe like they used to. At the same time, he discovers that he hasn’t been spending enough time with his kids and his family has suffered.

With that in mind, the elves explain to him that he can retire as Santa Claus and live a normal life with his family. He needs to interview and choose a successor to take over for him. He finds a suitable Santa in single-dad, Simon Choksi, and Scott and Carol move back to Chicago with the kids to start to live apart from the magic of the North Pole.

The failing Christmas magic is a bigger problem than they realize, however, and the show deals with that impending doom while characters deal with their own problems.

The show brings back many of the original cast, primarily Tim Allen, Elizabeth Mitchell, and even Eric Lloyd (Scott’s son, Charlie).

There is some bad language and alternative words used in each episode . There are a couple minor phrases used to imply something sexual, like a T-shirt that reads, “Sit on Santa’s Lap.” At one point, an elf gets sick and vomits, although glitter comes out. A character, the Christmas Witch, is introduced in the third episode and lives in the forest at the North Pole. Throughout that episode, there isn’t any major “witch” magic being done by that character, but it may be a concern for some parents that a witch is associated with Christmas. In general, the “magic” in the movie is similar to the “Christmas spirit” in movies like Elf, a general good feeling of Christmas.  Signs that spell out a message is meant to say “Love you Santa”, instead it is mistakenly spelled out “Love you Satan.”

On a more positive note, Scott deals with his purpose, his job, and his role as a father and husband. Being Santa has taken a large portion of his time, so he examines what is best for his family. He apologizes since he hasn’t considered what might be best for them. He had been consumed by his job and eventually decides to choose his family over his job.

In this movie, parents can have discussions with their kids about making sure that the family is a priority. Parents can ask questions that explore if the kids ever feel like a career or a job is getting in the way of quality family time. Discuss with the kids what some quality family activities might be to help with that.

The Santa Clauses is a family Christmas comedy that deals with the importance of having a healthy family during the craziness of work life and Christmas.

Scott (Santa) realizes he hasn’t spent enough time with his kids, and they’ve suffered. He decides to step away from work/North Pole to try and live a more normal life. Scott apologizes and listens to his family, but he also takes responsibility to find a suitable replacement. Also, it teaches that a “paradise” world (the North Pole) may not be the best place to raise kids and teach them about life.

Several uses of God’s name and other alternative words are used.

Puke glitter, there is a “Christmas Witch”