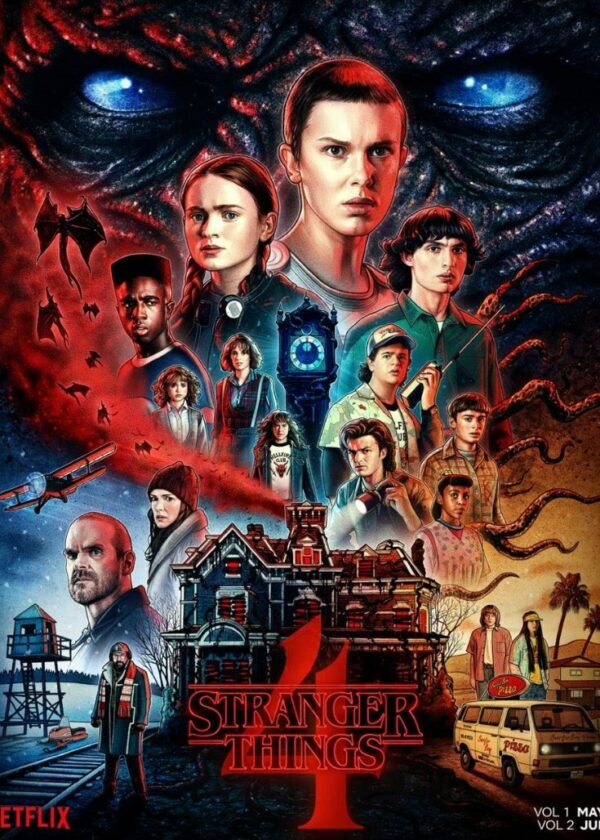 When a young boy disappears, his mother, a police chief and his friends must confront terrifying supernatural forces in order to get him back.
20
Negative Rating
12345
SexLanguageViolenceDrugsNudityOther
0
Positive Rating
12345
FaithIntegrity

After Eleven loses her powers, the Byers move to California (with Eleven), and Hopper is presumed dead in season 3 of Stranger Things, things are not the same in Hawkins, Indiana. Mike, Dusty, Lucas and Max have grown apart, Steve and Robin find themselves working at a movie shop, and Nancy, a high school senior, is working for the school newspaper. The story takes place in four locations: Joyce and Murray travel to Russia when they learn that Hopper may still be alive and in need of help, Eleven is abducted and taken to an abandoned Silo in Nevada where Dr. Brenner — AKA Papa — tries to awaken her powers, Mike, Will and Jonathan travel around California (and other locations) as they try to save Eleven, and the rest of the gang is back in Hawkins where they battle the next villain, Vecna.

With four storylines building upon the already complex Stranger Things universe, this season is understandably confusing — it’s definitely not the kind of show that can be watched in the background. Additionally, it shows dozens of violent elements, including a horrific massacre at the Hawkins National Laboratory, which depicts the murder of over a dozen people, both adults and children. Viewers are not spared any of the gory details, either. The season is littered with gruesomely shattered bones, blood-smeared walls, rotting corpses, and more. Eleven even smashes a girl’s nose with a roller skate (it’s relevant to note that this girl had severely bullied Eleven throughout the episode leading up to this incident). Because the authorities (and most of the parents) are unaware of the real villain of the story, the children find themselves constantly lying to their parents and, in some situations, to each other. With all this negativity at play, it’s tough to imagine that there could be any positivity.

There are, however, some redeeming qualities to the show. First, the intricacies of the plot are thoroughly thought out and well executed. Despite the “necessary” deception to save the town, the children display unparalleled loyalty and teamwork — including communicating with one another between worlds using a light box. Stranger Things Season 4 Volume 1 also addresses plot points from previous seasons and ties them together seamlessly. After three consecutive seasons it seems that the mystery of the Upside Down is finally coming together. The final episode of the first volume of this season (episode 7) ends with a shocking revelation, leaving viewers on the edge of their seats as they await the release of Stranger Things Season 4 Volume 2 on July 1, 2022, which will include two final, concluding episodes.

Stranger Things Season 4 Volume 1 is certainly not Dove approved; however, the filmography, plot, character development and comradery are outstanding. Should viewers choose to watch this season, they should do so with caution, remaining alert for elements that may be triggering or cause nightmares. Despite negative elements, Stranger Things Season 4 Volume 1 is entertaining and does an incredible job bringing the Stranger Things universe together for one intense, suspenseful season jam packed with action and mystery.

A suspenseful continuation of the Stranger Things series, Stranger Things, Season 4, Volume 1 is a complex set of seven episodes filled with mystery, suspense, violence, and, of course, elaborate supernatural elements.

Despite violence and deception, the intentions of the protagonists are honest. The series is also very team oriented.

Occasional cursing, including Oh my G, F, and H, among others.

The opening scene includes a massacre with walls covered in blood and bodies, including children, strewn across a lab. Similar violence appears throughout the season.

Some of the older children are clearly high in dozens of scenes, marijuana is also directly referenced.

Some male characters are seen shirtless.

The premise of the series is supernatural warfare; children are disrespectful of their parents and the police; many characters, both protagonists and antagonists, are deceitful; some crude humor.