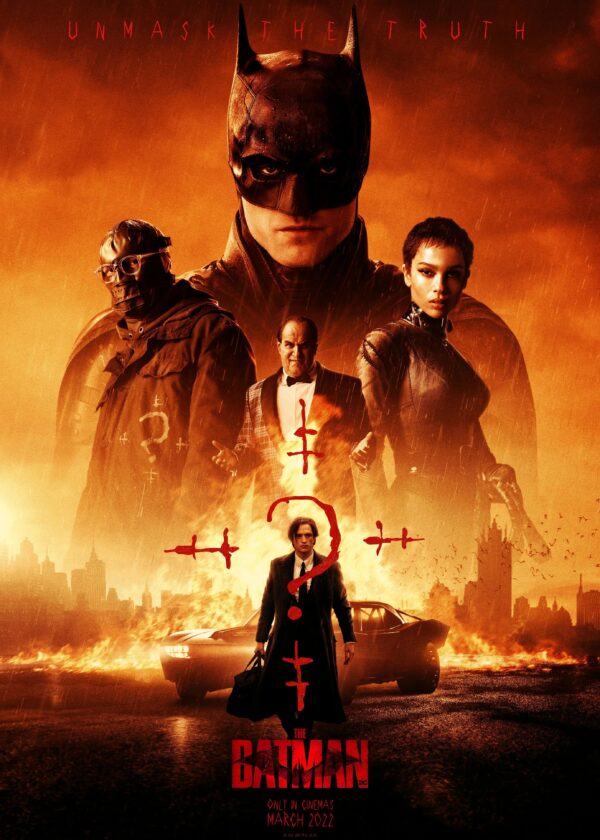 When the Riddler, a sadistic serial killer, begins murdering key political figures in Gotham, Batman is forced to investigate the city’s hidden corruption and question his family’s involvement.

The latest cinematic incarnation of the Gotham City superhero, The Batman, is now available on Blu-ray and DVD and seems to be the darkest of them all. With Robert Pattinson the latest to don the cloak and cowl, you’ve got to wonder who he’s really channeling here — the billionaire Bruce Wayne’s alter-ego vigilante or Edward Cullen, his vampire character from the Twilight series.

Both are nocturnal creatures. Conflicted and tormented, Pattinson provides a hero that dyed-in-the-wool Bat fans are almost certain to love — light years away from Adam West’s “biff-zowie-pow!” campy Batman of the 1960s, or even George Clooney’s ladies-man Batman of the 1990s. This latest revisiting of the character dives deeper and darker than even Christian Bale’s Batman of 2008.

Gotham City is a murky place, and not just because hope and sunlight apparently go there to die. It’s a city teeming with corruption, corruption that merits avenging. The question is who’s doing the avenging?

The mayor and some city officials — ostensibly, the city’s good guys — are being picked off by an assassin who leaves clues for Batman on cards with question marks. Any Bat fan worth his or her salt knows who must be behind these clues, but to what end?

The Riddler (Paul Dano)  is every bit as dark as the Batman, light years more serial-killer brutal than the whimsical Frank Gorshin character of the 1960s. On social media, he comes across as a methodical punisher of sin and hypocrisy, kind of in the same way Kevin Spacey’s character did 25 years ago in Se7en.

The who’s who of non-Joker Bat villains appear: Oz Cobblepot, or the Penguin as he’s more familiarly known, shows up as a reluctant accomplice of one of the city’s notorious gangsters, and if you didn’t recognize that it’s Colin Farrell playing him, that seems to be the goal. Catwoman/Selina Kyle, played by Zoe Kravitz, also has her axes to grind, but plays more like a flirty ally of the Batman’s than somebody he wants to put behind bars.

The story drags on a bit long at three hours, and there’s far too much bad language for this movie to earn Dove approval. The violence is muted — we see the results more than the actions that bring it about.

The Batman tries to out-dark its cinematic predecessors, majoring in violence, implied torture and bad language, and is hardly for the faint of heart.

A lot is implied or shrouded in the murky darkness, but a lot of results of violence shown — mutilated bodies. A man’s thumb is cut off, for instance. A corpse in the trunk of a car. Batman punches a lot of guys. There’s gun play and martial arts fighting. Batman electrocutes a villain in a subway while rescuing a man. A man gets hit in the face with a baseball bat. A sniper kills a man. The Riddler plants a bomb.

Characters consume alcohol; drug addicts who get high with eye drops — and thus are called dropheads. Much of the plot centers around drugs and many scenes are in a bar.