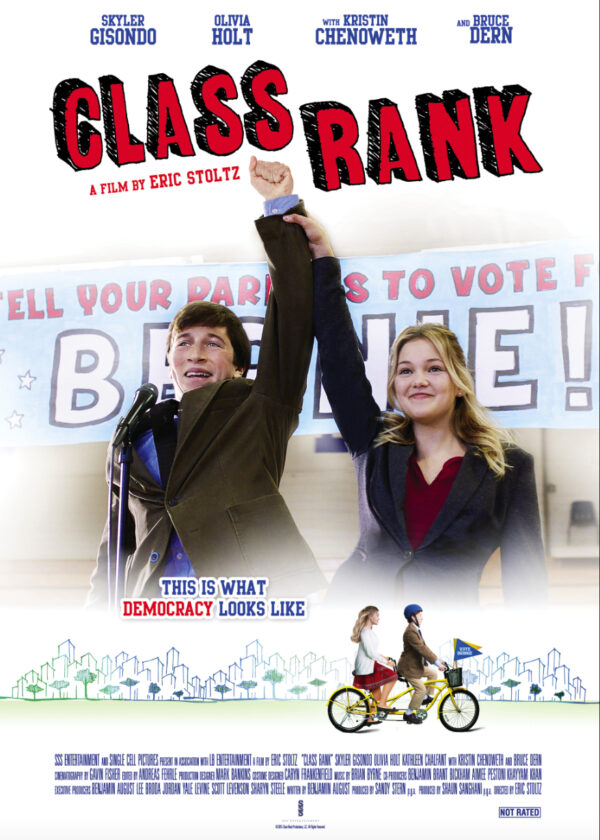 Two high school outsiders join forces in an attempt to overtake the local school board. Guided by their families, they enter the perilous word of politics and, in the process, learn a thing or two about love.

Class Rank is an off-the-wall and unique movie about a quirky young man named Bernard Flannigan (Skyler Gisondo) who runs for the school board as a teenager! Gisondo plays the part well, and joining his campaign is Veronica Krauss (Olivia Holt), who wants to learn from Bernard, or “Bernie” as he becomes known, so she can land in both Harvard and Yale! In fact, it is her idea for Bernie to run. She assures Bernie there is no age limit to run for the position. Kristin Chenoweth and Bruce Dern add a veteran presence to the movie, playing Veronica’s mother and Bernie’s widowed grandfather, in that order.

Bernie has been attending every township of Livingston meeting to fight various Board of Education policies. For example, he wants them to offer the Chinese language in high school, not French. We learn later in the film why this is really so important to him, as he has had a long-distance relationship with a girl in China, a pen-pal in fact, and they send tapes to one another. He wants to improve his Chinese.

Veronica, who is nicely played by Holt, focuses on her agenda. She wound up ranked number two in school after testing, and this has rankled her, making her feel as if her chances of attending a prestigious college is now hampered. Also entering the plot is the Editor-in-chief of the local newspaper, Barbara (Kathleen Chalfant), who runs Bernie’s articles in the paper, but she is forced to edit them down for their length. Bernie lives at home with his grandfather, Oswald (portrayed by the excellent veteran actor, Bruce Dern). Oswald’s wife, Bernie’s grandmother, has passed away and he misses her. He spends his day, according to him, eating breakfast, lunch, taking a nap, playing shuffleboard, and eating dinner. But things could change as the editor, Barbara, a widow, likes Oswald and wants to get to know him.

Veronica’s mom is a casting director for a hit TV show, and she listens to her daughter while at the same time talking on the phone, trying to find an actor to play a “rapist” in the next show.

The film features comedic moments, such as when Oswald tells Barbara he has been reading a book about Roman history. “I love Rome!” she gushes. “You should have seen it before it was ruined!” he replies, and she laughs.  After they play shuffleboard together for the first time, Oswald says he believes Barbara is a “hustler.” And another funny moment occurs when, following an argument with Veronica, Bernie sends her a tape, apologizing. “I heard you don’t die from swallowing your pride,” he says, and then he begins to make choking and gasping sounds which makes her laugh.

Bernie reaches out to various school groups, such as the athletes, to learn what is important to them at school. The human touch is added to the film, such as the scene in which Oswald looks at a photo of his deceased wife, and smiles to himself, obviously recalling some special memories.

Although the odds are against Bernie winning, he mentions how Harry S. Truman defeated Dewey for President in 1948. However, even with two positions open on the board, it doesn’t look good for Bernie when a woman, who is interviewed at an exit poll, says she voted for “the two adults” who ran.

The movie will have viewers in various spots wondering if Bernie and Veronica will be an “item”, the same about Oswald and Barbara, and if Bernie will win the board election. However, there is some strong content in this film. Strong language is included in it, including the “F” bomb, and “JC”, and there is also a scene of underage drinking at a party. On top of this, an unwed couple sleeps together, and it appears the woman passes a “joint” to the man, after she smokes it. Due to the film straying from “family friendly” territory, it has not earned our Dove seal.

This quirky and off-beat movie has some good moments, but it is over the top in its content, such as the use of language, and is not deemed appropriate for family-friendly viewing.

A young man wants to run a campaign honorably; a couple fights and then they both admit their wrongs.

An unwed couple sleeps together; kissing by a couple; a reference to lesbians and a young man that a girl liked when she was young, only to find out he was gay and that he had a boyfriend.

The use of strong language, including JC; F; H; Jehovah; Sucks; Nincompoops.

A young man falls off his bike onto the cement.

Underage drinking; drinking; a couple either shares a cigarette or joint (It is not entirely clear) a “weed” reference.

Tension and arguments between characters.