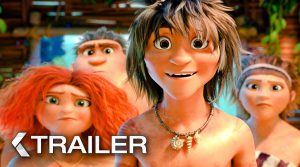 The sequel to 2013’s The Croods and the Netflix television show provides laughs, spectacular animation, and more plot than seems possible for a prehistoric society. In this adventure, Grug (Nic Cage) worries about his teenage daughter Eep (Emma Stone) running off with her boyfriend Guy (Ryan Reynolds), as they end up in a luxurious oasis controlled by Phil Betterman (Peter Dinklage). Betterman has his own issues with his daughter Dawn (Kelly Marie Tran), who has grown up sheltered in the overprotective embrace of her mother Hope (Leslie Mann).

While the humor remains visual and verbal in the sequel, it’s clear that there is plenty of heart in this one. Even while the two teenage daughters find peer friendship and have an awkward love triangle with Guy, their parents are trying to figure out an age-old problem: how do adults maintain friendships when their parenting styles are different? Both Grug and Phil want to control their daughters, the first by holding her close and the second by walling her into an oasis and scaring her about anything outside of it. It’s prehistoric helicopter parenting that is both funny and sad at the same time, and absolutely applicable to humans in the twenty-first century! Joel Crawford & Co.’s beautiful animation shouldn’t be overlooked, as it dazzles on the screen, from bright and exaggerated viewscapes to the impressive way that the characters (and background elements) move. The visuals are especially impressive when it comes to water: when a character experiences a shower for the first time, when the two men explore the soothing powers of a steam bath, or when a giant animal sneezes. The animation is fantastic.

But in 2020, the biggest takeaway of several is the way that the human community comes together to fight a common problem, putting everything aside to make a difference. It frees not only the people but also the community around them, liberating the world from fear and hate. One has to wonder if that’s not the message we all need this holiday season, whether you catch the Croods 2 around Thanksgiving or Christmas. There are plenty of resources available to all of us — if we’d open our eyes to see each other the way the Creator of the Universe sees us.

Croods 2: A New Age is a delightful romp with plenty to discuss for the whole family.

Slap monkey language involves slapping each other; humans defend themselves from giant animal

Slap monkey language involves slapping each other; humans defend themselves from giant animal

Crood family is prehistoric, with references to evolution