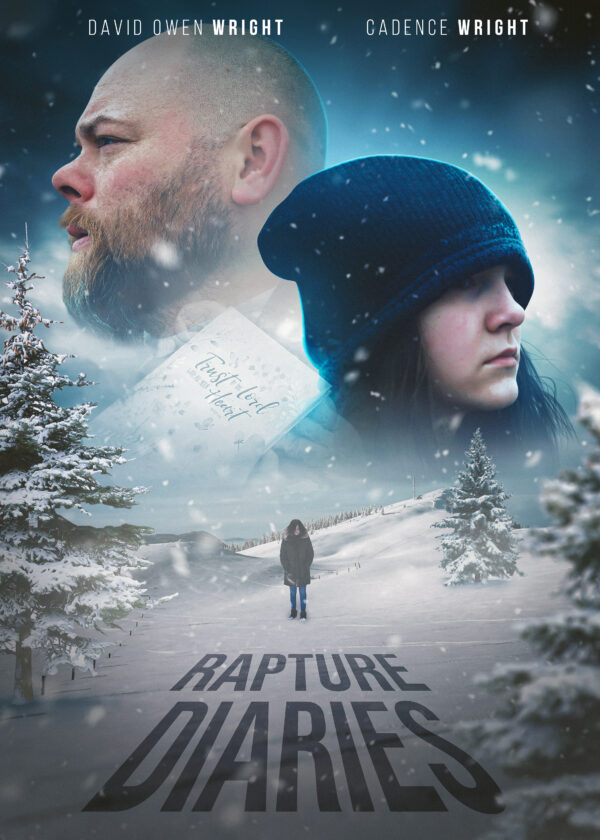 In this part 1, a little girl struggles with the loss of her mother, and re-evaluates her own salvation. She tries reaching out to her father about what it means to be saved, but he is too lost in his own grief to realize she is struggling with questions about the afterlife. He plans a trip to see the blood moon and doesn’t realize he will be getting much more than he bargained for. The Rapture. Who will be caught up, and who will be left behind? Are YOU ready?

The Rapture Diaries, Part I introduces us to a father (David Owen Wright) and daughter (Cadence Wright) during a moment of grieving at the mother’s gravesite. Consoling his daughter that the mother was saved, both still harbor that gripping question: Why? Why does a good person get taken? Why does a person leave his or her loved ones helplessly alone? Before they leave the snow laden grave, he reminds his daughter that the Word tells us not to lean on our own understanding. Still she wonders how to be certain of salvation and seems to doubt hers.

Later she tells her father of a dream she has had, a stunning dream that left her immediately alone when her parents disappeared. A ﬂash of searching across his eyes reveals his momentary concern, but he assures her, “It’s only a dream.” Later that evening he reads from Revelations reinforcing the message of His promise that we will be caught up in the clouds with our Savior. Still his daughter doubts.

As the sky loses its light, the two decide to go to the lake to photograph the blood moon, but clouds have crept in. Suddenly, without warning, bizarre lights are met with the proclaiming sound of a horn. To the girl’s horror, her father disappears, leaving only clothing on the ground. We are left on a cliff’s edge as the girl races through the night in terror.

A Rapture series offers great promise in our inescapable times. The Wright family consistently brings ﬁlms of importance to a watching and waiting world. The score and songs are attractively appropriate. Dove awards the All Ages Seal of Approval to The Rapture Diaries, Part 1.

This short ﬁlm, an introduction to a future four part series, establishes one family’s backstory just before the Rapture.

Father reiterates the Gospel to his daughter. John 3:16 is presented at the end of the ﬁlm.

Rapture scene is quick and jolting.

Rapture scene is quick and jolting.