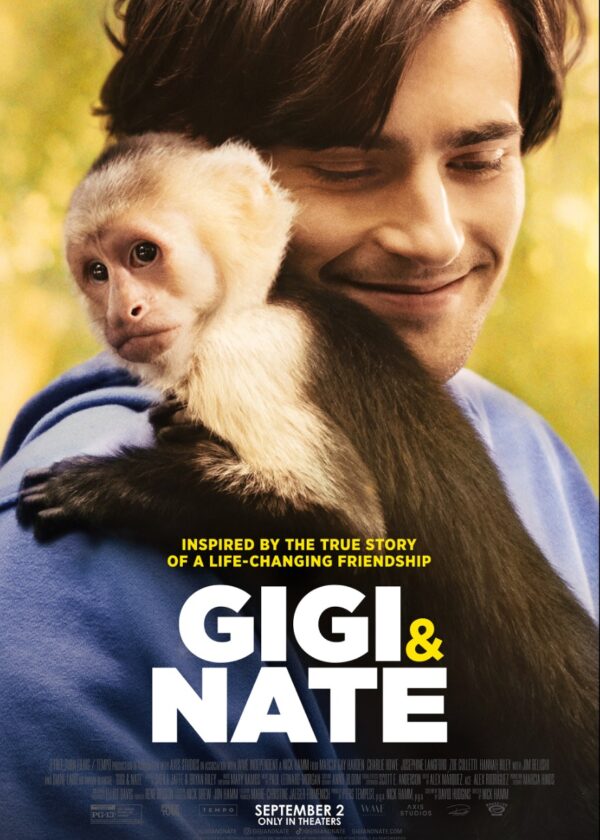 A young man’s life is turned upside down after he is left a quadriplegic. Moving forward seems near impossible until he meets his unlikely service animal, Gigi — a curious and intelligent capuchin monkey.

A young quadriplegic man gets by with a little help from his monkey friend in the new family drama Gigi & Nate. After a swimming accident leaves him paralyzed below the waist, Nate and his family deal with the fallout of his limited mobility. He becomes depressed and suicidal before everyone’s lives are changed with the addition of Gigi, a capuchin monkey, who not only assists him in tasks but provides camaraderie and care.

The film begins with tragic circumstances and has some serious emotional moments, but overall, it’s a warm feel-good message of hope. Every member of Nate’s family deals with the situation in their own way. Nate’s sister, who is initially very unwelcoming to Gigi, later becomes an ally when the family becomes the target of protesters. Fired up by a woman named Chloe, they demand Gigi be removed from the home, forcing law enforcement to get involved.

Mostly family-friendly, the film does include some PG-type language and the entire tragedy and emotional aftermath, including a suicide attempt, should give caution for younger children. Still, there are positive lessons to learn for children, most of all giving understanding to many in society who are physically challenged. The perils of social media sharing are also explored, as it brings a massive amount of attention on the human-simian friendship.

As mentioned before, hope is a prominent theme that appears through the dark times, leaving Nate to explain, “The truth is, she gave us the one thing we needed most—hope.” Nate’s family also is a family of faith, praying before meals and offering thanks to God in the film’s final moments.

Gigi & Nate features great performances by all, particularly Nate’s sister, whose outlook is transformed through the events. The monkey playing Gigi is super cute and will capture the attention of children and adults in a story that is inspirational and life-affirming.

Nate’s family turn to God in prayer in a few scenes, including gathering to pray before meals and expressing gratefulness for His help.

Nate and many members of his family strive to do the right thing.

Nate crushes on a girl at the lake before his accident and later attends a party.

Though not frequent, PG-rated profanity such as “d-mn” and “a-s” are uttered by main characters.

Nate is invited to a party with Gigi where he and the monkey consume alcohol.

The scene at the lake features young people in bathing suits.