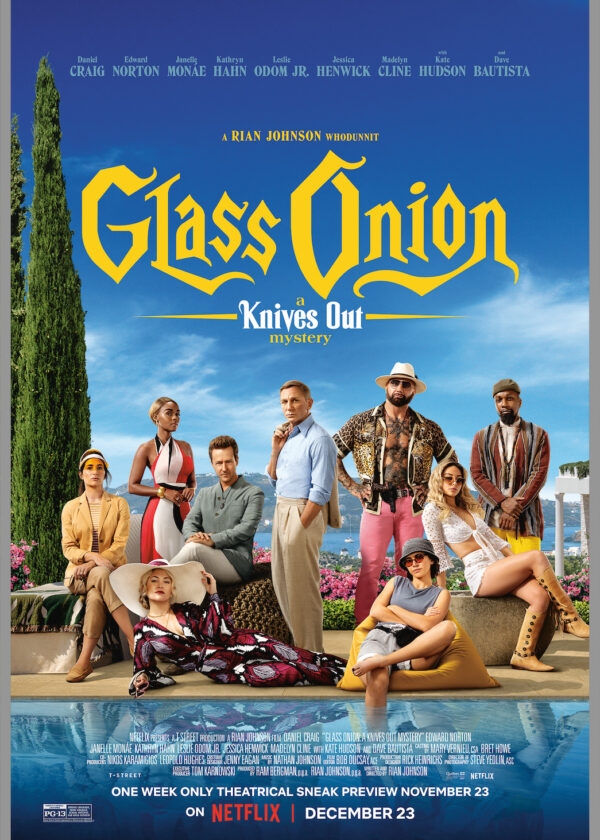 Glass Onion: A Knives Out Mystery

When eccentric billionaire, Miles Bron, summons his eclectic group of friends for his yearly murder mystery party weekend on his private island headquarters, the world’s greatest detective, Beniot Blanc, arrives through a mysterious invite. Believing something more nefarious is in the works, Beniot begins to take stock of each of the guests, trying to figure out what will happen before it happens and who will be on the other end of the proverbial smoking gun. As he befriends them, including a woman who was cut out of the company she co-founded completely, he discovers many reasons the reclusive mogul’s life might be in danger.

Following the success of “Knives Out,” fans were eager to see more of the humorous and quick-witted southern detective Beniot Blanc, portrayed by Daniel Craig. As the film opens, he’s soaking in a bathtub and drowning in depression, playing a game with some high-profile friends. He bemoans the shutdown and says what will bring him out of his funk is a good challenge, a new mystery to solve.

“I don’t need puzzles or games, and the last thing I need is a vacation,” he tells them. “I need danger, the hunt, a challenge. I need a great case.”

Speaking in a Kentucky (think Foghorn Leghorn) drawl, the new mystery is told through his eyes as he experiences the unique personalities for the first time. These personalities include Andi, a bitter co-founder who was cut out of the growing business, the fashion designer Birdie Jay and assistant Peg, Miles’ tech-savvy scientist Lionel, fitness influencer Duke and his girlfriend Whiskey, and the governor of Connecticut, Claire. Beniot is the outsider, welcomed by Miles and company as part of the festivities but he knows his presence signifies something more diabolical. “Mr. Bron, I’ve learned through bitter experience that an anonymous invitation is not to be trifled with,” he says.

As they reconnect with each other, whispers begin, and the game is afoot. Miles is set to reveal his epic and elaborate faux murder mystery while the stage is being set for one in real life. “Glass Onion” refers to the bar where the friends all met and to a massive glass structure in the middle of the island where Miles’ friends congregate. The various personalities come with their own comedic clashes, especially Beniot, whose reactions such as “Fiddelsticks!” and mannerisms help make the film a comedy standout. He was an excellent James Bond, but perhaps this is the role Daniel Craig was born to play. Sources indicate there’s at least one other “Knives Out” mystery on the horizon.

The film is done in the whimsical style of the classic murder comedy “Clue,” although “Glass Onion” is brighter and cheerier, given its island location. But the game is referenced as characters use notepads to anticipate the murder and who might be responsible. A backstory of how the friends came to be shows that Andi was the emotional center for the friends finding each other in the first place and encouraging them to press into the choices and occupations that eventually define them. Writer-director Rian Johnson then flips the script, throwing the audience off with diversions and red herrings.

Murder is the central theme, but in non-graphic ways such as (spoiler alert) a poisoned drink and a gunshot in the dark. One character goes ballistic and destroys many priceless artifacts. Because of this, frequent PG-13 level profanity and an extra-marital romantic tryst, its target audience is older teens and young adults.

As the layers of the “Glass Onion” are peeled back, viewers will find many characters willing to cash in their integrity to the highest bidder, even stabbing their friends in the back. Beniot and another character become the primary purveyors of good among a crowd of the criminally minded. They continue their quest to expose and right wrongs until the very end. If there’s a lesson in the film, it’s to do right by your friends and don’t forget who helped get you where you are.

Already making some critical “Best Of” lists, “Glass Onion: A Knives Out Mystery” is one of the top comedies of the year with an entertaining puzzle for viewers to solve and surprising twists to uncover. Like its predecessor, it’s marked by frequent profanity and adult themes, which should keep children away, but it’s a good escape for adults looking for a fun and engaging whodunnit with memorable performances.

No overt Christian themes.

Beniot is the everyman and a person of integrity who is relentless in his quest for truth and justice. Characters who make poor choices suffer the consequences of their actions.

One person looks through a window to see two other characters beginning to engage in intercourse. They are later revealed to have an ongoing affair.

There is PG-13 level language throughout the film including at least two “f” bombs, many instances of “s—t,” and “g-d-mn.”

There is mild non-graphic violence including poisoning and a character being shot in the dark.

Characters who are there to party are frequently seen with alcohol and drinks in hand. One character uses alcohol as a source of “courage.”

The characters are swimming together in various swim attire, including one character frequently shown in a bikini.