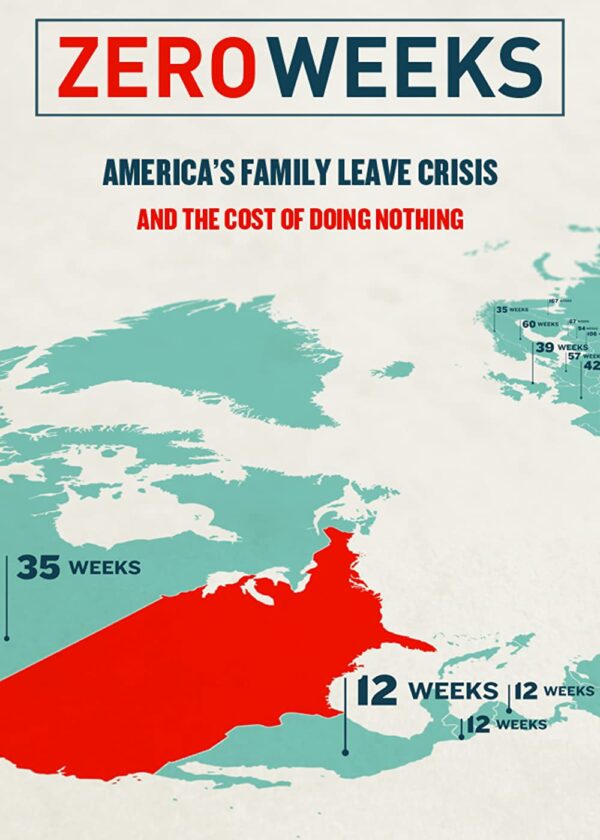 America’s paid leave crisis and the cost of doing nothing.

This documentary is an eye-opener, as it gives multiple examples of families with the need for Paid Family Leave, and how seldom it is available. Written and directed by Ky Dickens, this fascinating documentary makes use of video clips, interviews, statistics, maps, rallies, and the voice of experts to explain the necessity of Paid Family Leave for maternity and emergency situations, and sadly, the lack of its availability.

As the documentary points out, a pink slip at work or major car repair can badly impede a family’s financial situation and cause hardship. Financial fragility is all too real for many families in this country. Various scenarios are shared, including a couple who were expecting twins, only to have them born prematurely at six months old. They did not survive. The mother was still grieving, as was the father, when the father had to go back to work after only three days.

The Family Medical Leave Act, limited to just a few states, allows a family time off for 12 weeks. As it’s pointed out, even a mother cat takes care of her kittens for 12 weeks before she allows them independence. Tom Perez, former U.S. Secretary of Labor, speaks about Paid Family Leave and says it is the social fabric of the entire industrialized world, except for the United States. And the documentary reveals that 83% of Democrats support it and 71% of Republicans do.

A striking example of the problem is given as its mentioned one employee, who had been at her job for ten years, would have maternity leave for six weeks but without pay. She depleted her savings and had to return to work too soon.

Some of the hard questions that dads and moms have asked themselves is: “Do I keep my job? Or take the time needed to heal?” One man, realizing his job did not really care about he or his wife, decided to simply quit and be at home with her.

Various crusaders for the cause are listed, including Ivanka Trump, who pushed for a paid, parental leave program. Small businesses overwhelmingly support Paid Family Leave. Sadly, zero weeks is the reality in most cases.

Ellen Bravo, author of Taking On the Big Boys, has crusaded for years to get reform to help families during times of crisis. Her various lobbying efforts are a focus in the documentary. She works to help people such as a young mother, who almost sent a few e-mails to her job, explaining she couldn’t come in and was needed at work, but who went on in anyways.

Another facet of this topic is explored with the fact that a mother’s body and mental state are often exhausted for at least six weeks, and with no time off available for many, their own recovery is hampered, not to mention the bonding time with their children. In another statistic it’s shared that 89% of men believe that Family Paid Leave is necessary.

Another example is given of a woman named Donna, who works full time, but visits her ailing mother, who had knee surgery and is legally blind, every day. Donna is doing everything in her power to keep her mother out of a nursing home and living independently.  In an alarming statistic, it’s shared that the average cost of someone living in a nursing home is $82,000 a year. As it’s pointed out, not many families can afford that. Donna would like some family leave time to care for her mother, but it’s unavailable.

In another example, and this documentary features many, a man with leukemia was fired from his job, and eventually died. And the woman who shares the story shares that her sister got sick, and she is working at age 17 to help support the family.

Make no mistake about it, this is an interesting documentary about an extremely important topic that affects many Americans every single day. However, there is the use of very strong language included, two “F” bombs, which prevents us from awarding it our Dove seal as a wholesome, family-friendly film.

This is a well-made documentary which is hampered by strong language.

A woman mentions that life has been side on “this side of Glory.”

A husband and wife kiss; a woman who has just become a mother refers to her “wife.”

A business makes alcohol, and some vodka bottles are seen.

A woman says she considered an abortion but decided against it, not that she was against others getting one; hardships of families with newborn children and no or little maternity leave; families with illnesses who cannot take time off; death and grief.