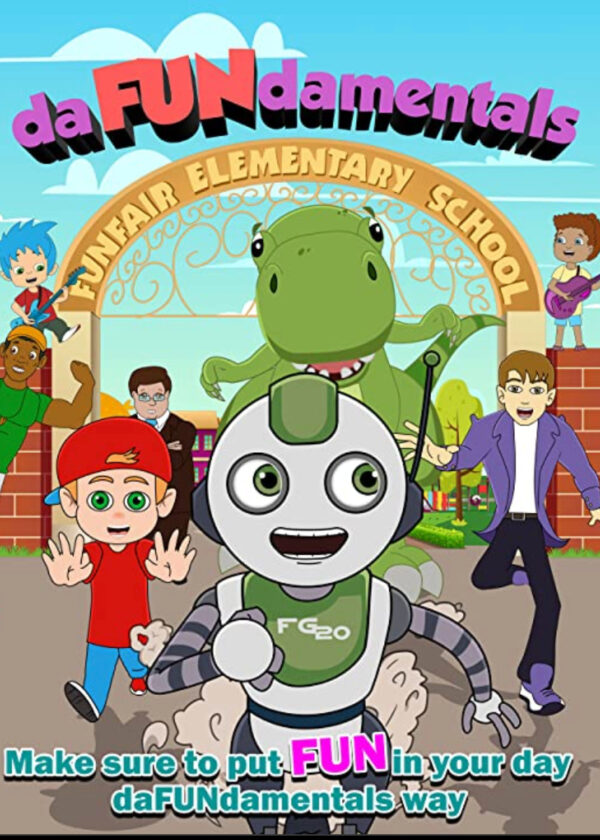 The daFUNdamentals is a music and media resource show for your child’s fun learning needs, reaching all age ranges from Pre-K to 6th grade.

This appropriately named series is most certainly the fundamentals of education, including math, science, history, and life lessons, but it is also fun with a capital F! Various creative videos are utilized during the nine episodes, which features peppy music, a bit of rap, eye-popping colors, and a lesson as well. Various themes are included such as following God, taking your Bible to school, and demonstrating forgiveness. These episodes feature live actors and terrific animation, with a T-Rex singing a bit of rap! The episodes maintain a nice balance of teaching along with making it fun.

At the beginning of each episode, we meet Funhouse Gary, who is animated, who introduces us to a “live” host, Emmy V. Emmy V. is enthusiastic and passionate about learning and having fun. We also meet Mario, who is the principal of Funfair Elementary School.

In the very first episode kids will be introduced to a song called Multiply It, an energetic song which includes the time-tables challenge, as such numbers as 14 are multiplied: 14×1, 14×2, etc. And a T-Rex sings a rap song, about being the biggest, baddest dinosaur on the planet.  The animation is terrific as the T-Rex really boogies! He will make kids laugh when he says, “My arms are short but longer than yours!”

Music class comes up with a “cat”-chy song which includes a cat “meowing” during the song. The various notes of music are examined, such as “C” as in “cat”, “D” as in “dizzy cat”, “F” as in “funny cat” and so forth. The kids will also learn about G-flat, A-flat, etc.

Another highlight of the first episode features a memorable song titled It’s a Colorful World. A lesson is presented about the primary colors-red, blue, and yellow, and how when they are blended that they make other colors, or secondary colors. For example, red and blue mixed makes purple. The lively song gives examples of the colors, such as a blue sky, or sea, and red roses and sunsets, and a yellow sun and lemons. The visuals are outstanding in this series.

Other teachers are introduced such as Mr. Castro, a kangaroo, and Miss Betty, who is also called “Aunt Betty.” And again, the episodes straddle the line between seriousness and fun, even teaching how to make “slime,” which includes shaving cream, water, and some glitter and glue. They even have a peppy song for this lesson! Some features are repeated in succeeding episodes, but lengthened with more information. For example, the U.S. Presidents’ names are given in a song, along with some history, in the first episodes. It starts out with George Washington and John Adams, and Thomas Jefferson. But in later episodes the song and lists cover other presidents such as Abraham Lincoln, Teddy Roosevelt, Woodrow Wilson, and Harry S. Truman.

Further episodes include lessons on stretching and lifting legs, and the arms and hands are seen touching toes. We also meet Coach Payton at a gym pep rally. And a visually stunning lesson on the planets of the solar system features another song as planets such as Uranus, Mars, and Jupiter are introduced to the kids. As the episodes continue more math lessons are given with more multiplication numbers and the fun is never forgotten, as birthdays are examined, and the fun kids can have with piñatas and friends.

As the series moves closer to the conclusion, the subject of forgiveness is scrutinized, along with a video titled Sorry, Sorry. A kid’s spiritual life is mentioned as being important and reading the Bible. The story of David vs. Goliath is told, and in this episode, Goliath is represented by the T-Rex! The Old and New Testament and their importance is examined.  The curricular lessons are continued, such as a lesson on shapes such as circles, triangles, and octagons and hexagons. A freeze game is included, as again the episodes feature both learning lessons and fun-filled moments.

A lesson on “choices” is included and a song titled Think it Through makes the point. The final episode features colorful balloons with statements such as “God is awesome!” and “God is in control.” A powerful song titled Everything I was searching for I found it in you, Lord is presented.

This is truly a rare and an amazing series, teaching your kids some important curriculum and yet adding Biblical life lessons-as well as fun-to the teaching. It has earned our Dove seal for All ages.

This wonderful series is highly recommended for your kids and even parents will smile at the fun-filled moments featured in each episode.

The Bible and God’s word are demonstrated as necessary for a fulfilled and spiritual life and statements such as “God is in controL” are shown on the screen, as well as themes of making good choices, and forgiveness; a few examples are given of kids needing to learn to forgive others for trespasses.

Kids are encouraged to make good choices, to forgive others, and to study and exercise.