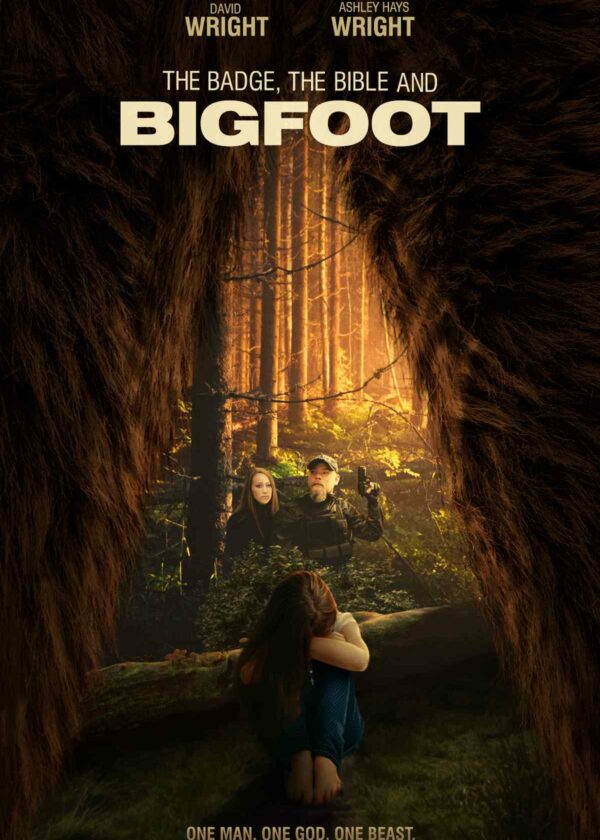 The Badge, the Bible, and Bigfoot

In a small coastal town Bigfoot is sighted, and children go missing. The town’s Police Chief is fired, leaving only the Sheriff. When the Sheriff goes missing, the town’s only hope is in Chief Harrison to battle the beast. He finds himself without his weapons and must go hand to hand with Bigfoot. Will his strength in God and training be enough to save the children?

I’ve never seen one like this before! It is highly original in concept—a police officer, a Christian man, loses his job but winds up searching for some girls who go missing after running into Bigfoot!

A family affair, the actors are as follows: David Owen Wright as Chief Harrison, Ashley Kaye Wright as the mayor, Claire, and Jaina Wright as youngster Riley, Scout Wright as Savanna, and Cadence Wright as Cindy.

The film is scenic, featuring beautiful scenes in the woods, near a river, deer and terrific colored skies. The Christian songs include one about Jesus Christ being Lord, about one day walking through heaven’s gate, and how it’s so easy to be saved, just by believing in the sacrificial work of Christ. The uplifting music adds much to the film.

As the story opens the viewer learns a council meeting is set to discuss the police department being disbanded. The mayor, Claire, hates the idea but funds are limited and there have been more fires in the past winter than the need for a policeman. Yet, as Chief Harrison, points out, where will those important calls go if he is gone? Unfortunately, it’s decided he will have to go, and the funds redirected toward the local Fire Department, which needs a new truck.

The film includes a bit of romance too, as real-life husband and wife David Owen Wright and Ashley Kaye Wright, are attracted to one another in the film as the police chief and the mayor. She tells him it’s nice to have a “big guy like you around.” He obviously makes her feel safe.

Then, a man in Hickory shares a Bigfoot sighting, and as Harrison and Claire agree, with all the sightings listed over the years of Bigfoot, there must be something to it, right? And a giant footprint is found. This sets social media to buzzing. When local girls go to the park and woods to play, and wind up missing, Claire begs Harrison to go search for them. Even a sheriff has gone missing. Harrison isn’t happy about just losing his job, but he cares about the girls and so grabs his rifle and begins a search. The ominous music may just have viewers holding their breath.

A few humorous scenes are added, including one in which Claire finds herself needing to use the restroom while out in the woods, no where near one. Harrison brags that guys always “hold it.” Yet a short time later, he has to go to the bathroom too!

The viewer will get glimpses of a furry creature racing through the woods, and we hear the voices of panicky victims crying out. There are a couple of scenes where the creature’s face is briefly seen, and although it’s pretty obvious it’s a mask, the suspense builds about Bigfoot and what will happen to the girls. And the music continues to be great, featuring another song about God’s love being amazing, and that “you love me.” Without giving it all away, a fight scene takes place that is both cool and funny!

There are wonderful themes in the movie, including the theme of the influence of violent movies, and how it’s important, scripturally, to be careful what the eye takes in, and how these things can influence behavior. And the importance of love and forgiveness are also demonstrated. People are seen quoting scripture and praying. And Harrison points out that there are 365 scriptures in the Bible saying not to fear.

The movie does contain a few scenes of shots being fired at the animal, and scary images, as well as a fight, so it has earned our Dove seal for Ages 12+. However, parents should consult the content listing to make their own informed decisions as some kids a bit under age 12 would be fine viewing it.

For those who love the legend of Bigfoot, and enjoy great Christian music, this is the movie for you, ages 12 and over.

People pray and quote scripture; a song makes it clear it’s easy to be saved by trusting in Jesus; Christian songs.

A man forgives a town for firing him due to a lack of funds; a man helps search for missing girls on his own time; a man risks his life to help others.

A couple kisses a few times

A rifle is used a few times to shoot at a creature; girls heard screaming as they are apparently apprehended; when a woman startles a man with a rifle, he says, “You’re lucky I didn’t blow your face off”; a fist fight between a creature and a man.

Girls are scared in the woods after being apprehended by a creature; girls are heard screaming; tension between a few characters.