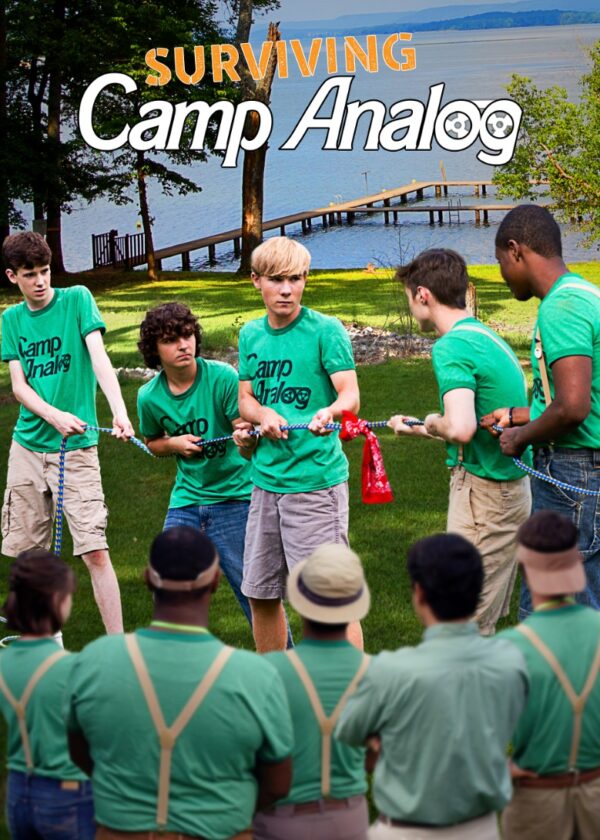 After an online prank goes wrong, The Shocklosers– a group of youtubing high schoolers– are shipped off to Camp Analog– a program designed to “rehabilitate” destructive tech habits– but once there they must fight its strict rules– and hidden intentions– to stay who they really are.

** Editor’s Note: This movie has also gone under the title The Shocklosers Survive Camp Analog

Surviving Camp Analog is a movie with a message. It takes a while for the viewer to understand the Camp Director, Suggs (Wayne Caparas), who runs an anti-digital, and anti-phone, camp at Camp Analog. He has a reason for being the tough-nosed anti-electronics guy that he is. Even his own daughter, Madison (Piper Collins), doesn’t understand him. She is cooperative with her dad’s stringent rules until near the end of the film, at which time she starts to rebel, along with Ryan (Luke Partridge), who feels their individuality is being oppressed. Madison gives the camp broadcasts over the p.a. system in the beginning, reminding the campers of the rules. And several camp counselors help enforce them.

Lee Fanning, writer and director, makes a strong point about bullying. And we see the characters as most teens are, trying to find their place among their peers. Ryan is a leader who eggs on his friends to stand up to the no-electronics rule. Others see the wisdom in being able to enjoy the campgrounds and nature without resorting to checking their phones every few minutes.

One camper wonders if it is a “brain-washing” camp. Yet, during a revolt, one camper takes over the broadcast microphone to encourage others to ignore the anti-digital rule, and later several of the campers storm the main office to speak out on the microphone. So, there is a thin line between the characters speaking out about their beliefs, and these same characters revolting against the adult director.

But why is Suggs so strong on this rule? We won’t find out until the end but, as Madison says in an early scene in the movie, the goal is to spread the “gospel of fun fidelity and the freedom of the great outdoors.” Those who adorn suspenders are campers who embrace the camp’s themes of enjoying the outdoors without digital distractions.

There are tense moments between the camp counselors and a few of the other campers, particularly Ryan.  And there are tense moments between Ryan and his friends, some of whom believe he is taking his stance for camper’s rights to the extreme. Yet, the movie incorporates moments of humor. For instance, a sign is posted about non-essential items made after the bi-Centennial. Ryan states that he was made after the bi-Centennial!

Name-calling is part of the comments that are made as would be usual for some teens, such as “Brainless” and “Little Punks”, and we learn that one kid, Blake,  was sent to the camp because he was looking at his phone when in the baseball dugout. His therapist thought he should take some time away. Yet, there are a few moments in the film when we see the kids doing normal things like having a tug-of-war, and eating smores and ice cream.

The campers kid each other as normal teens do. For instance, one boy is teased that his mother is the only girl he talks to, and he replies that no, he talks to his sister too! A few of the campers see themselves as “the resistance”, standing against the no-phone dictate. But others begin to fall in with the rule. However, ultimately there is a rebellion against the edict.

Suggs speaks out against the “insurrection” he states has happened against the camp rules. But then he opens-up and shares what happened to his other daughter, due to phone bullying. We won’t give the ending away, but it is a powerful moment in the film.

The film has procured our Dove seal for Ages 12+. It should be noted that there is a stand against the adult in the film, and parents may want to have a conversation with their kids about the right way to voice disagreement. On the other hand, this movie is slanted toward kids and teens, who no doubt will enjoy the kids standing up for their beliefs.

The seriousness of bullying and frequently being on one’s phone is tackled by this film, which is commendable.

A few campers learn that time spent without their phones can be time well spent; characters come to understand the camp director, whom they believed was a dictator, but they learn he went through a terrible loss.

Kids shove and wrestle with one another in frustration, nothing graphic.

Some kids are seen in shorts.