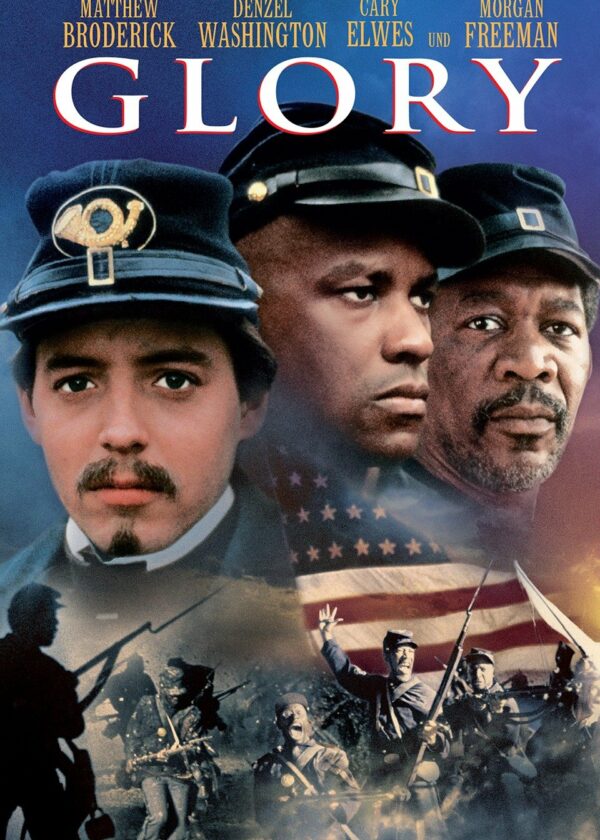 Robert Gould Shaw leads the U.S. Civil War’s first all-black volunteer company, fighting prejudices from both his own Union Army, and the Confederates.

This 1990 film stars a young Denzel Washington and young(er) Morgan Freeman, both playing
former slaves who have volunteered to serve in the Civil War’s first black regiment led by Union
Colonel Robert Gould Shaw. Colonel Shaw was the son of two well-known, prominent
abolitionists in Boston. With family pride and deep-seeded morality urging him on, Colonel
Shaw kept a consistent journal of his time commanding these troops, with his original letters to
home now sealed in Harvard University’s library.

Glory is based on Colonel Shaw’s testimony of this black regiment’s bravery despite consistent,
flagrant racism, even from Union troops. Some of these black men were born in the North, to
free parents, so they had lived their whole lives as free men. Others, most, had escaped from the
South’s slavery from states like Tennessee and South Carolina. Together, they formed a
hodgepodge of men with a passion for justice…but few skills for battle.

Though Colonel Shaw’s training was above par, he often ran into racism from his own leaders,
like those who were in charge of supplying the men with new shoes and uniforms but continued
to offer excuses. Other leaders from high ranks wanted to offer the black men less money than
the monthly pay of white soldiers.

However, as time quickly marched on, Private Trip (Denzel Washington) encouraged the men to
refuse haphazard support from Union soldiers. This regiment would demand to be treated as
men, as soldiers, as equals. Colonel Shaw aided their righteous revolt, joining forces to convince
the Union to be, well, a union for all, black and white. His men caught on to the tactics of war quickly, and when they were finally allowed to fight, they proved themselves more brave, just,
and honorable than white soldiers.

While this film parallels historical accuracies, gory violence, consistent profanities, and
excessive racism are prevalent throughout the entire film. Though themes of justice and honor
hold true, gruesome realities, mixed with little to no faith elements, remain prominent. Thus,
Glory is Not Dove-approved.

Featuring Denzel Washington and Morgan Freeman, this film portrays the
original letters of Colonel Robert Gould Shaw, the man in charge of the Union’s first black
regiment. Though justice and equality hold true, violence and profanity aren’t suitable for most
audiences.

Strong elements of integrity, ethics, bravery, and equality for all men.

Typical wine and whiskey shared at grand parties and among soldiers; one character clearly drunk