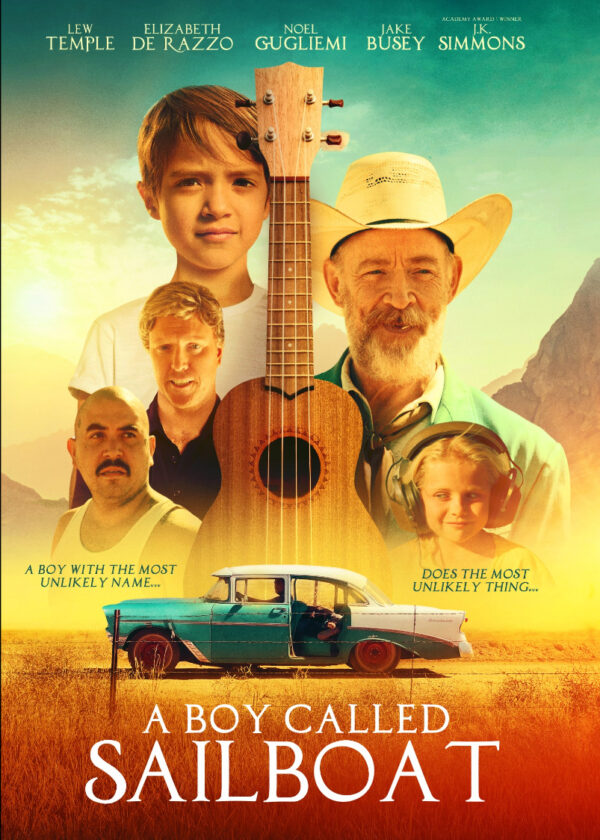 A Hispanic family find hope in their extraordinary son named Sailboat when a personal gesture awakens a global desire. Armed with a “little guitar,” Sailboat leads an offbeat cast into the miraculous story of the greatest secret never told.

Here is a unique movie with an unusual plot, a young boy called Sailboat (Julian Atocani Sanchez) finds a small guitar and, after learning how to play, eventually plays a song that unites many people.

Sailboat lives with his mom and dad in a small shack-like house outside of town. Times have been tough, and Sailboat’s dad has a long wooden stick attached to the side of the house, to keep it from falling over! They have a few close calls, especially in one scene when the stick is knocked down.

They are a loving family and go to visit Sailboat’s “abuela,” his grandmother, who is in the hospital and very ill. She asks Sailboat to write a song for her, and this begins his journey of writing a memorable song that will eventually be played on the radio, and it will be listened to by a large group of people standing outside of his house. The look of bliss on their faces attest to the fact that it is an amazing song. But we only see the “results” of his song, we never actually hear it ourselves, which leaves us very curious. Why was this song so touching and universal?

J.K. Simmons appears in the film as Ernest, a man who goes out to the deserted area near Sailboat’s home to do a car, truck, and van commercial! Simmons is always interesting to watch. However, there is a sexual innuendo in a scene where he is practicing before the commercial is shot. He refers to the comfort of his vehicle, and says it can be “boy on girl, or girl on girl, or boy on boy,” and so parents should be cautioned about this scene. And there are two scenes in which Sailboat’s dad briefly pats his wife on her rear, and then a later scene in which she does the same to him.

The idea of loyalty is nicely featured in the movie. Sailboat’s dad, Jose, is attentive to his family’s needs. Sailboat is mocked by classmates, and he is called “Rowboat.” And when a boy picks on Sailboat at school, and cuts his guitar strings, Jose goes to the boy’s home, and has his dad go with them all to a music store to replace the strings. He is an intimidating figure. And, when the dad gets out of the car, back at their home, Jose threatens the boy. He tells him he once broke someone’s neck when he was a boy. He tells the boy he wants him to smile at Sailboat at school from now on. In a humorous scene, we see the boy smile a giant smile at Sailboat, while continuing to walk down the hall with his friends. He’s afraid to talk to Sailboat, but he sure can smile!

One of the touching scenes of the film is when Sailboat goes to the hospital to play the song he’s written for his grandmother. The idea of creativity is also a theme of the movie, with Jose painting a beautiful painting of a horse, and eventually getting one to ride.

There are enough humorous scenes to keep a good balance between some of the sad moments of the film, such as the grandmother’s declining health. In one scene, some wood ants have been chewing on the stick holding up the house. So, a pest control man comes out to help, wearing a hat that says, “Simply the Pest.”

Due to its themes of family loyalty, and going after a dream, the film has procured our Dove seal for Ages 12+. But we caution parents to look over the content listing to make their own informed decisions.

This movie shows that even a child can make a difference in people’s lives, and that dreams are worth going for!

An image of Jesus on the cross is seen in a boy’s bedroom.

A husband and wife pat each other on the rear; a man talks about “boy on girl”, and “girl on girl” and “boy on boy” in practicing to do a commercial about his vehicles, but nothing else is added.

A boy cuts a boy’s guitar strings; a man tells a kid he once broke someone’s neck when he was a boy.

A bar is seen from the outside.