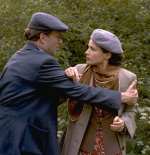 "Varian's War" is Showtime's Americanized version of "Schindlers List." The film traces Stateside Harvard Graduate Varian Fry (played by William Hurt) who grants himself the task of setting up an elaborate rescue of prominent Europeans (mostly Jewish and Polish writers/artists) from Jewish persecution during World War II. The movie mostly takes place in Marseillis (in 1940), where Varian is aided by a loyal American confidant named Mariam Davenport (Julia Ormand), a European refugee named Beamish (Matt Craven), and a caricaturist by the name of Frier (Alan Arkin) who helps the group forge passports to send the European artists and writers overseas. Lynn Redgrave also stars as Alma Werfel, who is mysteriously sending precious cargo unbeknownst to the rest of the group, all while the likes of the great artists Franz Werfel, Hannah Arendt, Heinrich Mann, and Marc Chagall transport to the United States. This is a great film filled with hope and sacrifice, and the commitment to doing what is right regardless of inhumane circumstances. Varian Fry is a great model (minus the casual smoking and drinking) for doing something out of kindness and humanity, who is not motivated by money, sex, or power. Definitely catch this premier on Showtime on Sunday, April 22, 2001.
6
Negative Rating
12345
SexLanguageViolenceDrugsNudityOther
0
Positive Rating
12345
FaithIntegrity

“Varian’s War” is a very worthwhile story, but not as gritty and violent as other Holocaust dramas, so those who want to study the aspects of war heroes during this time should be much obliged to watch this stirring TV movie with the entire family. The only drawback is that it might be too boring for the younger set. It will help if the child has been briefed beforehand about how and why the Nazi’s treated people the way they did. This film will be most appreciated by a family that spends time afterward discussing with youngsters the harmful effects of prejudice and hatred. Congratulations to Showtime for airing this powerful film, rife with good acting and direction, tastefully done without gore, language, and sexual themes.

Some scenes in which Nazis are roughing up some innocent victims, but it is not gratuitous. Mild violence.

Some scenes in which Nazis are roughing up some innocent victims, but it is not gratuitous. Mild violence.

Varian and Mariam smoke occasionally, as do others in the film; some social drinking.