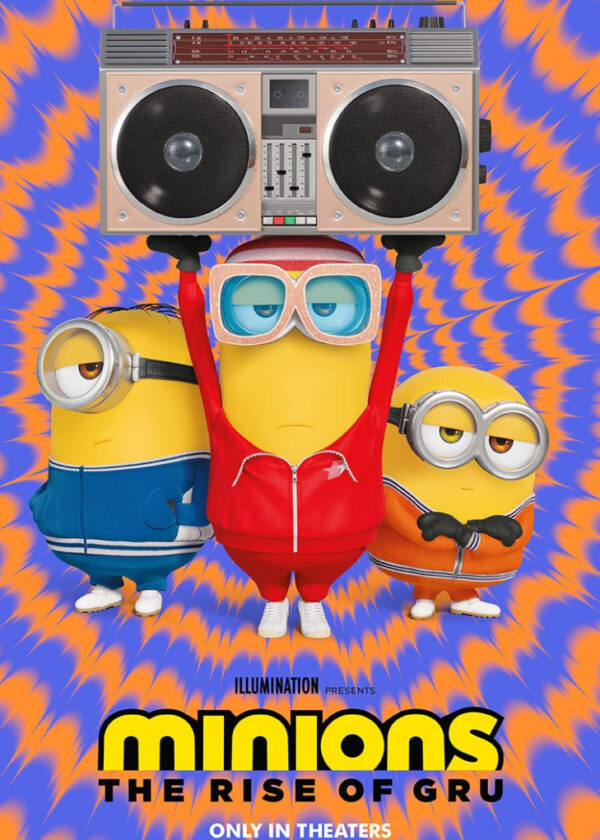 Minions: The Rise of Gru

When 11-year-old Gru (Steve Carell) gets kidnapped for displaying great courage in an effort to prove his villainy, his ever-faithful Minions (Pierre Coffin) come to the rescue: Kevin, Stuart, and Bob are back at the head of the gang, and a new Minion, Otto, is an welcome addition to the crew as a braces-sporting people-pleaser. It’s the 1970s, and the soundtrack of this movie never lets us forget it – just about very Karen Carpenter and popular funky song of the day is in the background setting the scene, as this origin film is a prequel to the ever popular Despicable Me franchise. Gru has not yet grown into the villain he will become, and as a cute youngster with a big dream, and always out to make trouble, we are asked to once again root for the bad guy. I found myself questioning if this is really the message we want to expose young children to, but the film’s charming portrayal is somewhat endearing nonetheless.

Gru is trying to break into the world of villainy, and when a position opens up with the world famous “Vicious 6,” he does all he can to get the job. When that goal seems out of reach, Gru goes about making his own way, and teams up with Wild Knuckles (Alan Arkin), the ousted Vicious 6 leader with a vendetta of his own, to beat the popular villains at their own game. With an amulet that is patterned after the characters of the Chinese calendar acting as the holy grail, everyone is scheming to possess the power it holds. Gru lucks out and ends up on the run, and he and Wild Knuckles work together to beat the Vicious 6 at their own game.

Expected antics ensue as chase scenes, martial arts fighting, and slapstick violence reigns. The mischievous Minions are typically in and out of trouble, but remain loyal to their favorite villain Gru, as they employ teamwork to outsmart even worse villains than themselves, coming off as the heroes. There are a few scenes that could frighten children when characters transform into giant Chinese dragons and snakes; breath fire on other characters; and wreak overall havoc, but all of this is done in fairly benign cartoon-style portrayals. As bad as they all are, they portray some good qualities by loving their friends, and even sacrificing themselves for others.

This high-energy take on the early years of Gru the villain don’t reveal many surprises, but it is entertaining enough to hold a place in the hearts of Minion lovers.

Gru and Wild Knuckles are faithful to one another and rescue each other from danger.

Gru is seen with part of his buttocks showing, and in his underwear.

Villainous characters are transformed into giant, roaring, fire-breathing dragons and similar animals that represent the Chinese Calendar and could be frightening for very young children.