I Was a Teenage Faust 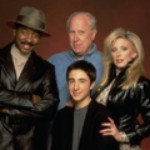 Mr. Five is in deep trouble with his boss Mephisto, a.k.a. The Big Guy, Satan, The Devil. As one of Mephisto’s tempters, he is sent to earth to bargain for human souls. It has been nearly 15 years since he has delivered one, a failing he blames on the territory he has been given – central Indiana. Mephisto isn’t buying the explanation and condemns Mr. Five to the flames of hell only to discover that he can’t get anyone to take on the job. So Mr. Five gets one more chance.

He finds a likely target in Brendan, a long suffering teenage geek who lives in the small town of Cloverdale, Indiana. Brendan would do anything to be one of the cool kids, especially after he meets and becomes smitten with Twyla Day, a model who is throwing a big bash at the local country club. However, when Mr. Five makes Brendan cool, he neglects to get Brendan to sign the standard contract for his soul. Noticing the oversight, Mephisto’s girlfriend, Babylonia, heads to earth to ensure that Mr. Five seals the deal. Meanwhile Brendan has second thoughts and insists on a one day trial. However, it is now Brendan who neglects to read the fine print, and he must find a way to become uncool, fast, or face eternal damnation.

Brendan soon learns that being “cool” isn’t what he really wants, that it doesn’t help him to accomplish his goals. He loses his best friend, and soon learns that the girl he is attracted to would rather have a “geek” for a friend than a “cool” boy. He is happy and relieved to be restored to the way he was before he met Mr. Five, and is able to put his true values in proper perspective.