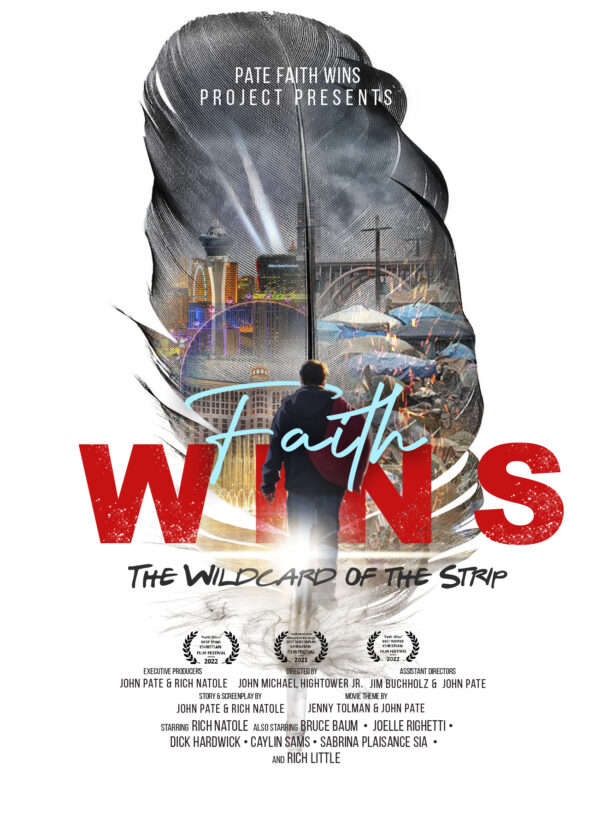 Faith Wins: The Wildcard of the Strip

Faith Wins is an inspirational “riches-to-rags-back to riches” story of tragedy, finding a personal and lasting relationship with Christ, and compassion, and all that it entails along this winding journey of faith. It takes place in Las Vegas Nevada, and speaks to the issues of great personal loss, homelessness, survival, courage, redemption, and restoration.

The main character, Billy Rizzo is at the top of his game in entertainment. He loses his wife, his job, home, and all he has, becomes homeless living on the street. Through a many months journey, he is introduced to a group of people from ALL walks that eventually leads him to pray and make the decision to personally follow Christ.

Through a further series of events and life experiences, he is restored back to a level of entertainment fame, but this time with a new perspective of making “Others First.”

This creative and unique film has a lot of entertainment value. Real-life comedian Rich Natole seems to be the inspiration for the character of Billy Rizzo, and Natole plays the character with comedic talent and even depth, adding nuances to his role.

The film captures the audience’s attention right off the bat, with Rizzo performing in Vegas, and impersonating Donald Trump, Robert DeNiro, Joe Pesci, Dustin Hoffman and Mike Tyson. He uses their voices in a spoof of The Wizard of Oz. There is a bit of political commentary, as the voice of Trump is used as Oz, and he says, “If you want your wishes granted, bring me the broomstick of Nancy Pelosi!” So, just a warning, it’s possible a few viewers could be put off by a few of the comments. It should be noted that famous comedian Rich Little appears in the movie, playing himself.

But the movie is not about politics nearly as much as it is about the homeless, and helping both the homeless and Vets. And the story leading up to this theme is filled with dramatic as well as a few comedic moments.

Rizzo’s wife Jacqui (Caylin Sams) meets tragedy in the film and Rizzo is left alone. He struggles in dealing with life minus his wife. He winds up gambling at a casino and keeps wanting a mark, or to finance his gambling and bets. He loses big time, and then can’t find a job anywhere. His life spirals downward until he finds himself being kicked out of the hotel he was staying. He is literally on the streets and homeless, a big contrast to the life he had lived just months before.

Throughout the film, Rizzo does impersonations and he is spot on, whether it’s Johnny Carson, Charles Nelson Reilly, Clint Eastwood, Sylvester Stallone or Bill Clinton. And, although he doesn’t realize it at the time, when he meets a homeless man named Beenie (Bruce Baum), his life is about to change. Beenie becomes an ally, showing Rizzo the ropes of surviving the life of a homeless person.  And he shows him how to “look sad” when panhandling. Rizzo winds up meeting a local pastor named Pastor Emily (Joelle Righetti), who helps him and feeds the pet dog named Roady, which the homeless men have adopted.

Rizzo and Beenie begin to work together, along with Roady, and they perform for local people in small city areas, with Roady being the “talking dog” and Rizzo providing his various celebrity voices. And Pastor Emily influences Rizzo, who begins to realize there is more to this Jesus Christ and the Bible than he ever knew before. As his life begins to turn around, Rizzo’s passion to help the homeless and veterans increases dramatically. He begins to realize he can make a huge difference by doing small things.

In another one of the comedic scenes, Beenie shows Rizzo the area he and others have been sleeping, under trees on blankets, and Rizzo tells him, “This is terrible.” “We finally got it up to this level!” replies Beenie.

This film features an inspiring message of helping others, and trusting in the Lord, and it has captured our Dove seal for Ages 12+.

This film features drama, laugh-out-loud moments, and the important message of helping those who are less fortunate.

A pastor helps the homeless and a man is converted and during the credits we see his baptism; songs of faith.

A husband and wife kiss.

A man tries to rob others but is stopped as he flees with the money.

Some drinking in a few scenes.

Death and grief; gambling; tattoos on a few characters; tension between characters; the difficulties of being homeless.