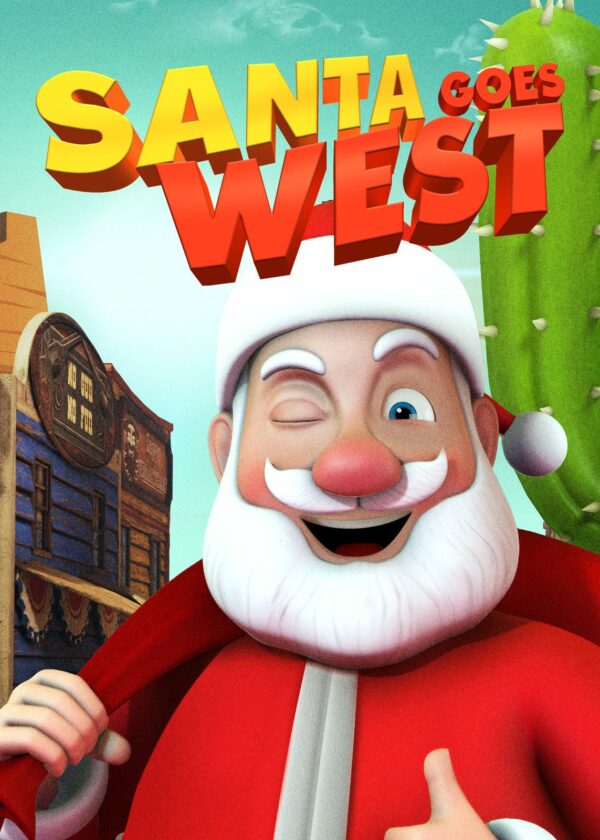 It’s summer in Westopia, and crooked mayor Mr. Tucker has hatched a new trick: a Christmas in July Gold Rush. Santa travels to Westopia on a quest to uncover Mr. Tucker’s scheme.

This wonderful, animated feature shows that people can change for the better. Mayor Tucker, mayor of Westopia, is a burro with an easy and big smile. But he has embezzled money to offshore accounts, something that his legal counsel, Jeb the giraffe, does not want him talking about out loud. Tucker doesn’t fear being arrested because, as he says, “I am, after all, the mayor of this city here.” But Jeb reminds him that the local sheriff, Sheriff Kid (a lion), is not on their side.

Tucker has a scheme to win a big lottery, and he won’t be winning it fairly. The story takes place in the old west, and Tucker doesn’t want to pay taxes on his windfall when it comes in. And he tells Jeb that even if someone in town won the lottery (which they won’t, he adds) they would only get half of the winnings after paying half of it in taxes! Tucker lets Monty, the town rat, know that he will deliver a new coffee maker to him once he ensures the mayor’s victory. And, of course, a short time later the winner of the lottery is announced by a bird: “The winner of this year’s Westopia town lottery is . . . Mr. Buck Tooth Tucker!”

Immediately a shark offers bodyguard services to the mayor and a dinosaur offers to help as well. But not everyone believes the mayor won legitimately. Miss Scarlet, a lady mouse, exclaims, “My cheese puffs, Mr. Tucker won that million dollars! Something’s not right here.” Deputy Tibs is not happy about the outcome, but Jeb says there is no proof it was a sham. In a comedic scene, Ewel the frog, tells Sheriff Kid about Tucker winning the lotto. “Are you serious?” asks the sheriff. “As serious as a deep fryer at a frog leg party!” Ewel replies. The sheriff doesn’t think the mayor was eligible to play and wonders if it is legal. The sheriff says the situation is going to open a can of worms. “Ummm . . . worms,” says Ewel. “That reminds me, I didn’t have lunch today!”

There are several witty lines of dialog in the movie and the animation is terrific, as are the voices of the actors who bring the various characters to life. Tucker is planning to have a statue of himself built as a monument, and he decides he wants it built out of marble and he wants it in the middle of Westopia’s town square. And it has to be 25 feet tall!

Sheriff Kid fights back against Tucker’s scheme, saying that 100,000 acres outside of town will be given to the lottery winner instead of the million dollars. It is desert land but Tucker is not happy and says he wants the cash. But he is told to check out the land because it will be more valuable than the money. But good old Jeb comes up with a plan to lie that the desert land has gold on it, thereby starting a gold rush with the idea it will ultimately line Tucker’s pockets with money when he sells off the land.

Cody, a monkey, and Lovella, a grasshopper, visit Santa Claus and learn that Tucker has never been on Santa’s nice list, not even once. Santa says Tucker is “one bad burro.” In a nice moment in the film, he states that cheaters never win. “They may get immediate satisfaction,” he says, “but it’s never worth it in the long run.” Other characters wind up playing a part in the outcome, including Santiago the horse and Chili the penguin. In one scene it’s cold out and Santiago tells Chili there are parkas available inside a shop. “It’s okay,” replies Chili. “I mean, Chili’s my name!” Santa winds up having a conversation with Tucker, who claims Santa ambushed his home years before in just trying to come down the chimney, because he was uninvited! Santa says Tucker is “unrepentant” and has no remorse. Tucker says Santa is a “recluse” 11 months out of the year. Without giving the ending away, the movie does a terrific job in showing that no one is beyond redemption. By the conclusion, a new spark has struck Westopia.

The movie does a good job in showing that there is right and wrong, and that evil may appear to be winning, but that ultimately good will win out. There is the worldview that cheaters do not prosper and that when people band together they can stop evil from overtaking everything.

Think About It: With cheaters not winning in the end, and people standing up to the bad guys, parents can have meaningful discussions with their kids about doing the right thing when it looks like it won’t make a difference. Another meaningful discussion point is that one person standing up for the truth can make a difference and that cheaters ultimately do not prosper. This film has procured our Dove seal for All Ages.

THE DOVE TAKE: This is remarkable movie that parents and children can watch together, and it promotes meaningful discussions about doing the right thing, even when it’s not popular.

Several characters know that the mayor won the lottery illegally, and they speak up and say so; the local sheriff is a good role model as he fights back against the cheating mayor and his crony, Jeb; Santa believes that people can change, and he stands up to the crooked mayor; a character repents and does the right thing in the end.

A couple of characters fall from the sky in an air ship but they are not harmed.