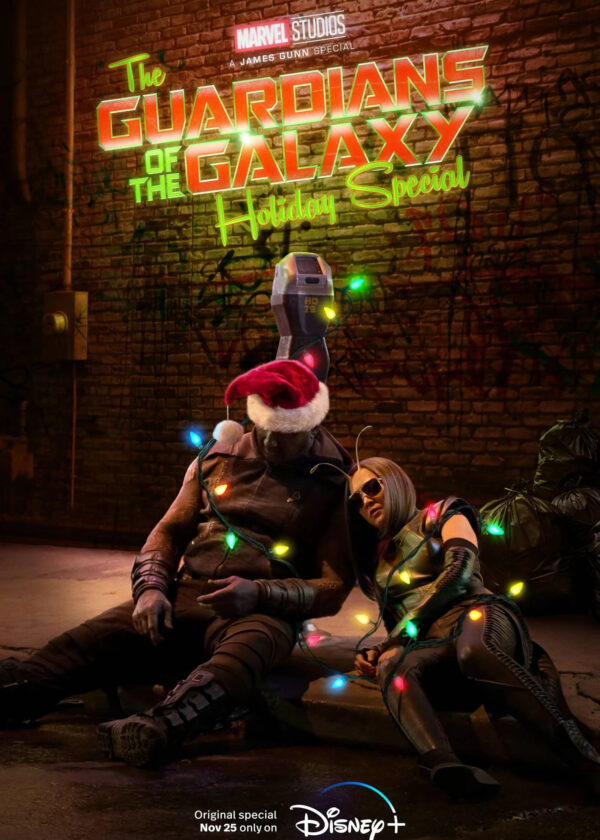 The Guardians of the Galaxy Holiday Special

The Guardians of the Galaxy, with Peter/Star Lord as leader, have bought Knowhere from the Collector. Cosmo the Spacedog is now a new member, and he joins Nebula, Groot, Rocket, Kraglin, Drax, and Mantis. While they are beginning to repair and restore Knowhere, the Guardians hear of a time when Peter was younger and Yondu supposedly ruined Christmas for him. Mantis and Drax discuss finding the perfect Christmas gift for Peter to cheer him up. They decide to go get Peter’s hero, Kevin Bacon. Mantis and Drax fly to Earth and Hollywood to kidnap Kevin Bacon and bring him back for Peter.

In the Guardians of the Galaxy Holiday Special, the Marvel Cinematic Universe brings us a Christmas themed story on Disney+ streaming. The Guardians have purchased Knowhere, a planet-type space station, from the Collector, a character in previous Guardians of the Galaxy movies. They are restoring and rebuilding Knowhere when the Guardians tell a story of when Yondu allegedly ruins Christmas for a young Peter Quill, aka Star Lord. Mantis and Drax decide to cheer Peter up by getting him a great Christmas present. After a discussion, they fly to Earth to pick up Kevin Bacon, Peter’s biggest hero, to come back to Knowhere. Arriving in Hollywood, they must track Kevin down and fight cops to kidnap the famous actor.

Fans of the MCU and the Guardians of the Galaxy will enjoy this “holiday” special. This streaming special takes place in the timeline after Thor: Love and Thunder and before the next Guardians movie. The main characters and actors are all present – Chris Pratt, Dave Bautista, Vin Diesel, Bradley Cooper, and more. A new character is added to the gang, Cosmo the Spacedog. The band, Old 97’s, play an alien musical group that writes Christmas songs. Peter Quill mentions Kevin Bacon and Footloose at the end of the first movie during the “dance-off,” and Bacon’s inclusion in the special is fun. People who aren’t fans of the MCU may still enjoy it but might get lost as to some characters and references.

Being more along the lines of a PG-13 film, there are content issues that may bother parents. Drax and Mantis get drunk in a bar, complete with someone trying to put dollar bills in Drax’s belt. Once drunk, Drax and Mantis steal a map and money from a street vendor, fight cops, and kidnap Kevin Bacon. There is some language and cursing that may be a concern as well.

The main redemptive theme is the new connection we learn about between Peter and Mantis. They are brother and sister, and despite all the problems, once Peter hears about his new family, he considers that the real greatest gift, even better than Kevin Bacon. Family is an important priority, especially in context of the holidays.

The importance of family is a common theme in holiday movies and stories, and here is no exception. The Guardians of the Galaxy operates as a type of family, a community of misfits led by Peter Quill/Star Lord. Peter lost his family when he was younger, primarily through the tragic death of his mother, so for him to find another family member is important to him. Discuss with the kids why we should make our families a priority, and why having family around us during Christmas or any holiday is a gift. Perhaps some family members can’t be there through distance or death, and we can have a conversation about how people are more important than stuff.

Dove Take – The Guardians of the Galaxy Holiday Special is a comedic Christmas story that will delight fans of the franchise, but parents might be concerned about the drinking and cursing in the film.

The Guardians of the Galaxy act like a family, and since they hear that Yondu once ruined Peter’s Christmas, Drax and Mantis go to Earth to get Peter a great Christmas present. When Manis reveals that she is Peter’s sister, Peter tells her that is the best Christmas gift ever.

Drax and Mantis go to bar and get drunk