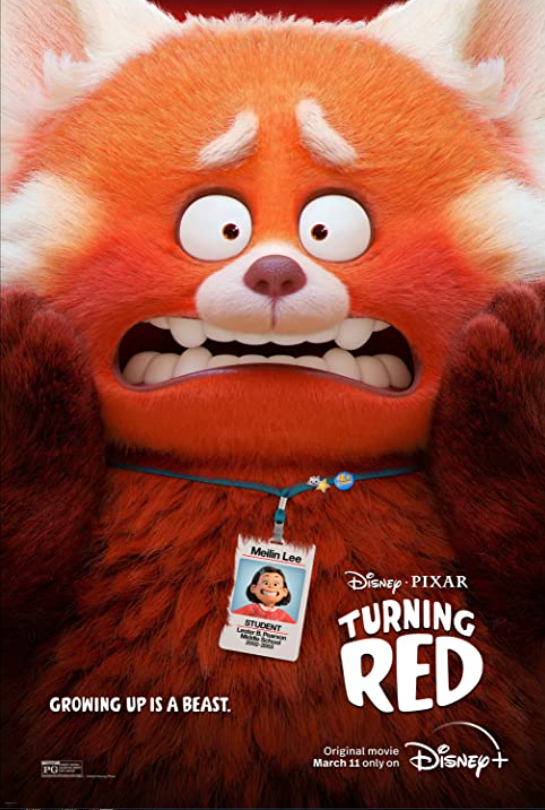 A 13-year-old girl named Meilin turns into a giant red panda whenever she gets too excited.

We’ve seen Turning Red before. It’s the teenaged and tamer version of The Incredible Hulk — namely, that when the mild-mannered human comes under stress or something that makes him (or, in this case, her) angry, they suddenly morph into a creature that ostensibly can do something about it.

Or maybe a more accurate description of Turning Red would be Teen Wolf meets The Joy Luck Club.

In a movie that unquestionably aims at a slightly more mature audience than some of Pixar’s other offerings, the focal character is Mei Lee, a 13-year-old girl living with her parents in Toronto’s Chinatown in 2002. She helps take care of the family’s temple and tries to stay on her stern mother Ming’s good side, by playing the good little girl who hides desires and curiosities that every teen must eventually confront. These are things that can only be repressed for so long, and when they leak out — and particularly when Ming makes a big, embarrassing deal about it — Mei turns red-faced. And furry. And all panda-ey.

From the Christian perspective, you’ll probably take issue with the Buddhist leanings of this film, born out of the main character’s culture. We know that there’s one God; this movie refers to “the gods.” Or the ancestor worship. Those are more the settings than the emphasis, which is overwhelmingly a coming-of-age tale about how a teenage girl relates to the three P’s — parents, peer pressure and puberty. (OK, that’s four. Sue me.)

Some Mings out there will no doubt find in this tale some sort of subtle endorsement about sneaking out of the house and lying to parents, as Mei does — as if kids haven’t stumbled across (and practiced and perfected) this concept all on their own for, what, centuries? Ferris Bueller did it and then some. Cost him a Ferrari that wasn’t even his.

What complicates these teen-coming-of-age inclinations is that Mei, it turns out, is but the latest in a long line of panda-morphing women in her family. They came to this blessing/curse many moons ago in China, after praying to “the gods” for a way to protect their village from marauders. “The gods” gave them the power to become pandas. But they didn’t make it easy to contain the power — that can only happen in a sealing ceremony on the night of the Red Moon.

Mei learns how to calm herself down to tame her inner panda, but she also exploits it. This, of course, is part of the “my panda, my choice” declaration that will no doubt harken not so subtly to the ongoing abortion issue in this country. When Ming denies her permission to attend a concert at SkyDome by 4*Town, her favorite boy band, she makes the panda emerge to show off at a party, in an attempt to raise money for 4*Town tickets. When she goes to the concert anyway, Ming’s own inner panda erupts and there’s panda-monium in a confrontation at SkyDome.

One of the strong points about this movie is that there is a wealth of conversation points for parents and kids, and admittedly not all of them may be comfortable. One, for instance, could deal with how parents and teens should relate in light of Ephesians 6:1-4 (“Honor your father and mother … don’t exasperate your children.”)

But better that you have these conversations and deal honestly with them. Repression very well mean you’ll find yourselves dealing with pandas of your own, and some of them won’t be nearly as cute and cuddly as Mei. This movie merits a Dove-approved seal for Ages 12+ for its

We’ve all got protective inner beasts that we must acknowledge and tame, rather than repress and shame, and too few do, to the detriment of a great many.

Refreshingly, the movie deals with uncomfortable realities in coming of age, in mother-daughter relationships, in the value of family, and in the dangers of lying and hiding the real you.

Mei twerks as the red panda and sticks her head in-between her legs and twerks some more. It’s way more comedy than sexy; Mei draws herself and man cuddling, and hides the pictures that eventually concern her mother.

A mother fights her daughter as a monster