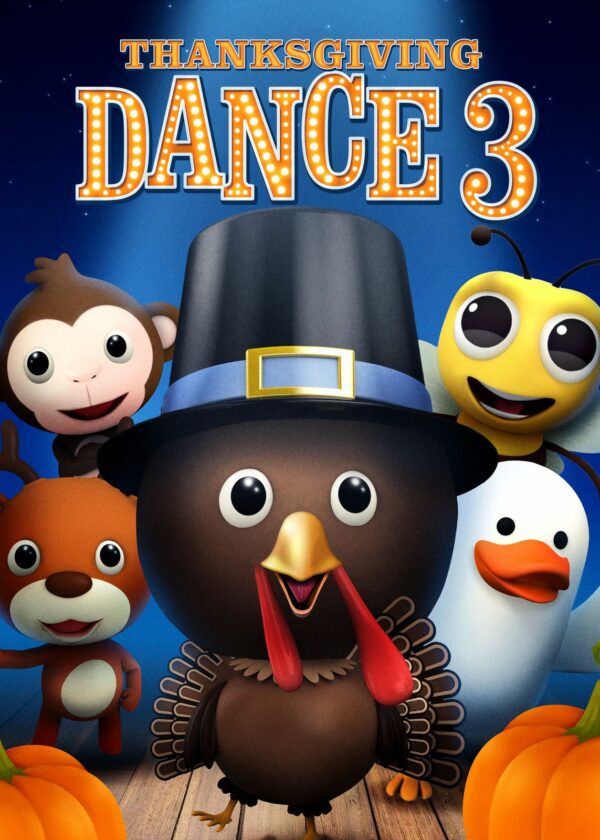 Thanksgiving is finally here and there’s so much fun to be had in Sunnyville. Besties Beezbee the bee, Peanut the giraffe, and Brooklyn the lion are on a new adventure in this delightful holiday party in Thanksgiving Dance 3.

You know it’s Thanksgiving time when the movie opens with talk of apple pie, mashed potatoes, and “those glorious biscuits!” Beezbee the bee says he’s going to gorge himself up to his stinger! Peanut the giraffe reminds Beezbee and Brooklyn the lion that Thanksgiving is a day of giving thanks and to appreciate the people in our lives. Brooklyn adds it’s good to give thanks for the people who make the great side dishes! Brooklyn says he is thankful for all his friends in Sunnyville, “especially you two.” And Brooklyn makes the point that everyone should be thankful for their parents and Peanut is glad that one day his neck will be long enough to reach fruit from any tree! And once he can, he will share the fruit.

Santa Claus shows up to say, “Happy almost Thanksgiving! It’s one of my favorite holidays.” (It’s a safe bet that Christmas is his favorite one.) Santa gives his list of things he is thankful for, including his friend Mittens, Mrs. Claus, the reindeer, and his elves. And Mittens is thankful that they’re all one big happy family. Santa adds that we’re all a “little weird,” unique in our own way, and that makes us special and not boring. And one can’t hang around Sunnyville very long without a dance, and so Santa says, “Let’s do the Different Dance.” And the upbeat music kicks in with several characters joining in the dance, including Santa, Mittens, and others.

Several dances are featured in this warm holiday movie, some upbeat and others at a slower pace. The characters are lovely and warm, and the voice work of the actors is top notch. Beezbee includes the audience when he says that their friends watching at home are great and have some serious dance moves! Some of the characters choose unusual things to be thankful for, such as Lolly who is thankful that she can have nice mouthwash and good dragon breath! But at least she shows gratitude.

The movie incorporates timely themes for kids, including remembering to brush their teeth and that “flossing is important.” The need to take care of our bodies is emphasized. This leads to the Happy and Healthy Dance. The importance of health, both “inside” and “out” is showcased.

Buttercup makes the point that anticipation is a cause for happiness, as she is anticipating the Thanksgiving holiday. And she’s happy she will get to stuff her face with her favorite dessert, pumpkin pie. Mittens is thankful for his hair stylist. And a teachable moment occurs when it’s mentioned that jack-o-lanterns can be made out of pumpkins, pumpkin seeds can be roasted, and then pumpkin pie can be a terrific dessert for Thanksgiving. Other song and dance numbers are featured, and Shelly the turtle says there’s so much to be thankful for, that she doesn’t know where to begin. And Sunny the sun is thankful for the Earth’s living things, such as the flowers and the trees.

There are wonderful discussion points which stem from the movie, including the variety of things people are thankful for, and why it’s important to appreciate the people and blessings in our lives. And this includes things that can be taken for granted, such as the flowers and trees and nature. Another important theme is that everyone is different, but these differences make us unique.

Think About It: The movie does a good job in showing that little things, such as pumpkin pie, and mouthwash, can be a blessing, as well as the people in our lives. And a great discussion point with kids is being thankful for food and the Lord’s provision. Often the blessings are so many it can be difficult to figure out where to start! It also nicely reminds the viewer to remember the shelters, and the importance of helping others out. This film focuses on the wonderful theme of being grateful, and it has earned our Dove seal for All Ages.

THE DOVE TAKE: Watching this movie is a great educational tool for kids to learn about being thankful, and parents and kids can share what they are grateful for as they watch this delightful film.

Just the idea of being thankful, no scriptures.

“Butts”; a line about “shaking your booty”

Remembering everyone is different is an important theme. Everyone gets along well in the movie.