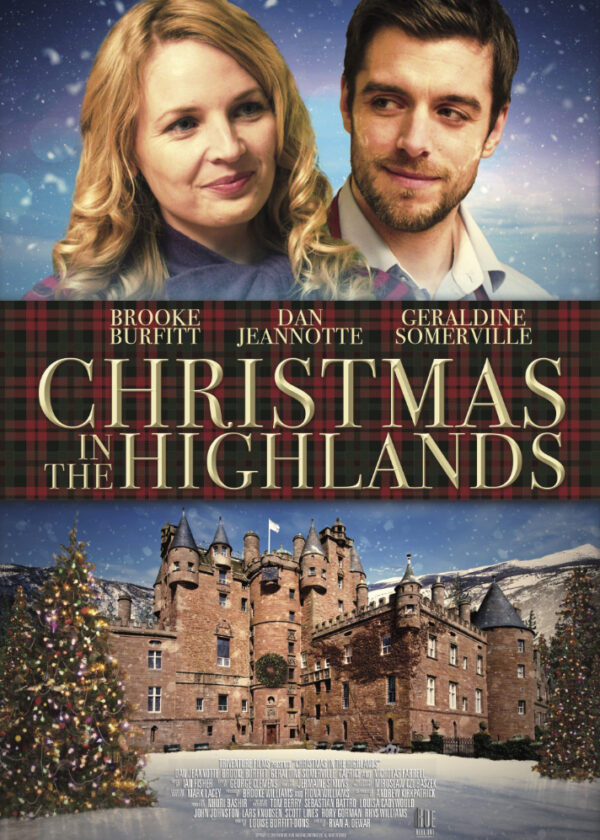 Christmas in the Highlands

A New York sales manager is sent to the remote Scottish Highlands at Christmas to acquire a limited edition perfume from a dashing Earl preparing for his annual ball and falls in love instead.

This pleasant escapist movie with a Christmas theme is shot in beautiful Angus, Scotland, with scenes at the romantic 14th-century Glamis Castle, once the home of the Queen Mother Elizabeth. You will be charmed by the country scenes and introduced to the mysterious, glamorous, and shrewd world of perfume-making.

Blair Henderson, (Brooke Burfitt), is a New York perfume expert with dreams of one day becoming a master perfumer in her own right.  When she receives a rare perfume as a gift, her boss sends her off to the Heart of the Highlands to find the source of this exquisite scent. There, she meets the handsome and charming Alistair McGregor (Dan Jeannotte) whose family owns the formula, and she is invited to stay at his home — which is an actual castle!

Blair is excited and impressed but cannot forget why she is in Scotland.  It’s the formula she must come home with or risk losing her job.  However, Alistair is not about to give up his secret, much less sell the formula.  Thinking on her feet, Blair poses as a documentary filmmaker and does not disclose her intention of learning the secret formula.  Alistair is trusting and intrigued with Blair’s American charm and allows her to film his every move.

But gold-digger Kirsten (Ellen Patterson) who dumped Alistair for someone with a yacht, wants him back and sees Blair as an intrusion into her plan.  Google clearly reveals Blair is not a filmmaker, but an employee of one of the most prestigious perfumers in the world and can be here for only one reason – to steal the formula for Alistair’s late mother’s prize perfume.

When Alistair leaves Blair in the laboratory, she sees the perfect opportunity to complete her mission, but a photo on the shelf causes undeniable twinges of guilt. At the airport, Blair resigns her job by email, and simultaneously discovers her boss is on the way to the castle with a vengeance.  Blair must make quick-thinking decisions to prevent the secret formula from being exploited but it’s too late, as Robert (Olly Bassi), Alistair’s brother, announces he’s sold the formula and the deal is done.

Ahh, but Robert’s careless blunder unexpectedly paves the way for Blair to accomplish her dream, and the distinct scent of romance is undeniable as Alistair and Blair pursue their lifelong happiness together.

Twinges of guilt that prompt honorable behavior will always eclipse self-serving selfishness and the rewards are well worth the effort.  A unique storyline, great visuals, and good cast makes for a very entertaining movie.

Alistair’s brother, Robert, is unscrupulous and deceives his family in an underhanded business deal.