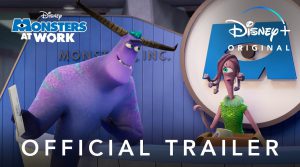 Tylor Tuskman has just graduated from Monsters University at the top of his scare class and has been recruited at Monsters Inc. to do what he does best. However, the day before he starts, the head of the company, Henry J. Waternoose III, is canned. With Mike and Sully now in charge, the whole corporation is transitioning to a joke company. Tylor now needs to figure out how to become a jokester.

The Scriptures say there is “no fear in love,” and for those following Disney’s Monsters franchise, there is no fear in its streaming-series spinoff, Monsters at Work.

Though we’re 20 years down the road since Monsters, Inc. came out in 2001, the COVID-delayed spinoff is set on the day after the spiderly crablike villain Henry J. Waternoose III’s arrest by the Child Detection Agency in the movie. Fans will recall that the Monsters, Inc. factory employed portals to access children’s closets, hoping  to scare the little ones, collect their screams and thereby energize the city of Monstropolis.

But when a little girl breached the monster world, the newly promoted powers that be — namely, Mike and Sulley (voiced by Billy Crystal and John Goodman) — start to realize there’s a better way and that laughter may the better medicine after all.

So, the business model has changed — fear is out and laughter is what they’re after. It’s a challenge for Tylor Tuskman, who recently graduated from the scaring school at Monsters University and thought he was getting his dream job. But now, he’s got to find a way to fit in in an entirely different world, one built on laughter. Scarers are so last century. Jokesters are now. Tyler has to learn to fit in with MIFT, the Monsters Incorporated Facilities Team.

The series seems fairly wholesome, any concerns being mild at best, and as such merits the Dove-approved seal for All Ages.

It’s a delightful series about he dealing with the curveballs of life, as Tylor does when adjusting from a career of horror to one of hilarity.