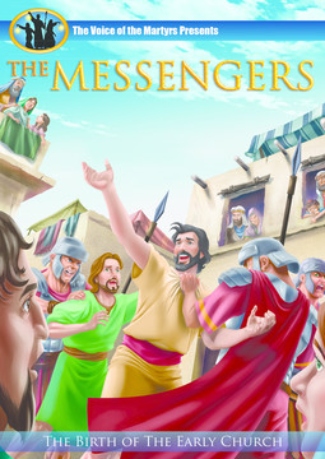 The Messengers: The Birth of the Church

The birth of the early church.

From The Voice of the Martyrs comes the sequel to God with Us: The Messengers—The Birth of the Church.

Having risen from the dead, Jesus Christ has appeared to His disciples and instructed them saying, “Remain in Jerusalem until you are filled with power from Heaven!” Waiting in prayer as Jesus has commanded them, the time comes when the Holy Spirit is poured out upon them with great power and wonder!

Follow the small band of early Christian believers as they boldly proclaim Christ and His message in the face of great opposition resulting in the growth of the church and the unexpected conversion of its most zealous enemy.

Based on the Book of the Acts of the Apostles Chapters 1-9.

People of all ages will be inspired by this powerful and moving depiction of the first Christians. Recommended for ages 7 and up.

This colorful animated movie does justice to the New Testament heroes of the faith. Based on various Bible passages, the film faithfully reproduces the events of God’s messengers with just a little creative license in imagining dialog. However, many of the quotes are taken literally from scripture. The Voice of the Martyrs are behind its production and the animation and voice acting is all top-notch.

The film opens by revisiting Jesus’ public ministry, and how he faced opposition from religious leaders, namely the Pharisees. He tells his followers he plans to go to Jerusalem and that he will die there. The Pharisees rejoiced at Jesus’ crucifixion, but he rose from the dead!  He instructed his disciples to tarry until they would receive the promise of the Holy Spirit and that they would be endued with power from on high. He appeared unto his disciples for 40 days before his ascension into heaven. John the Revelator is seen on the Isle of Patmos as the last living disciple. However, what happened to several other disciples of Jesus is examined in this remarkable and inspiring film.

Herod Agrippa accuses James of doing wrong since the death of his “Carpenter leader. Once and for all, the man is dead-crucified-buried!” exclaims Herod. But he can’t do away with the name of Jesus. We see how the Holy Spirit descended on Jesus’ disciples on the day of Pentecost.  The apostles were accused of being drunk but were heard speaking the language of other ethnic groups, including The Arabs, Cretans, etc. This spiritual filling was the fulfillment of the prophet Joel’s prophecy about the Holy Spirit. Peter preached a powerful message on the day of Pentecost and 3,000 souls were won to Christ.

The film shows a wonderful miracle when Peter, who is asked for alms (an offering) by a lame man, replies that he doesn’t have silver and gold but what he did have, the name of Jesus Christ of Nazareth, he offers to the man. “Rise up and walk”, says Peter, and the man does!

This film features several reverend moments from scripture, and it is devotional in its approach in bringing the Bible to life. It features dramatic music and vocals which adds nicely to the overall effect of the movie.

Several of the disciples are released from jail with a warning to not speak any longer in Jesus’ name but it’s not going to go down that way. Peter replies that they ought to obey God rather than men. In another display of miracles, it’s mentioned that people are healed when Peter’s shadow falls upon them. God is truly still using his disciples to do his work. Some of the disciples, as mentioned, are arrested and in a light moment in the film John comments while in a cell that a sign over the door says, “Peter and John’s cell.” When the disciples are freed, they preach again!

A wise man, a leader in the Sanhedrin, Gamaliel, says they should be careful (speaking of the religious leaders) in how they treat the disciples. For, as he points out, if what these followers of Jesus are doing is not of God, it will come to nothing, but if it is of God, they don’t want to find themselves fighting against God. And a passage from Isaiah is mentioned, picturing Jesus as the lamb of God who would be slain for the healing of his people.

Another dramatic moment from the film involves Stephen, a faithful follower of Jesus who was accused of blasphemy. He is stoned but states he sees God on his throne, and Jesus standing at his right hand of power. It shows some of the stones thrown at Peter and some blood is seen, but it is not gratuitous.

Another messenger of the Lord, Saul of Tarsus, is a surprising one. Having been a former persecutor of Christians, Saul meets Jesus while on the road to Damascus. A great light strikes him blind, and Jesus asks why Saul persecuted him. He tells Saul who he is, and later Saul receives the healing of his eyes when Ananias prays for him. He is also called to be a preacher to the Gentiles. Another great story from the book of Acts is about Philip, who is called to explain the book of Isaiah and Jesus to an Ethiopian, who was reading it while in his carriage. The Ethiopian believes and is baptized.

Written and directed by Robert Fernandez, this terrific, animated film stays within our Dove content guidelines and has earned our Dove Seal for All Ages.

This film is a wonderful educational tool to teach children how the early church leaders passed the tests they faced by remaining true to their calling to preach the gospel.

Several wonderful examples of speaking up for Christ from the book of Acts.

Jealousy of religious leaders toward the disciples; tension between characters.

Some disciples are struck with a stick and Stephen is stoned with some blood seen on him and on the ground, but it is brief and not gratuitous.

Jealousy of religious leaders toward the disciples; tension between characters.