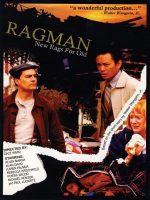 A ragman from another time and place visits a modern city, offering to trade his new rags for the old ones of the people he meets.

This is a dynamic short film, which can be an influential force for the sharing of the good news of Jesus. Based on a short story written by Walter Wangerin Jr, and directed by Dale Ward, it stars Allen Marsh as the “Ragman,” a man that walks through the city streets pulling a wagon of rags. He yells “Rags” like a salesman, but he doesn’t sell them. He gives them away.

An Asian man follows close behind him, dressed in a suit underneath his impressive-looking trench coat.  We see a young woman, sitting on a porch and crying. The Ragman removes a rag from his wagon and takes her and offers her his rag. She stops crying.

Next, we see from a distance and a man and a woman fighting. He is yelling at her at a door and telling her, “You’re not going to leave me!” He adds, “I tried. It’s not my fault I lost my job.” He shoves the crying woman and tells her he doesn’t want to see her again and for her to leave. The Ragman walks over to her and sees her with a bloody rag on her forehead, and a bloody mouth. “Take my rag and I’ll give you mine.” He takes her rag and when he places his on her head she is no longer bleeding on her forehead or her mouth. When he places her wrong on his forehead, we see blood on his head and mouth. Astonished, the Asian man continues to follow him, watching.

He exchanges shirts with a man who has lost his right arm. Afterwards, the man has gained a new right arm and Ragman has lost his. “Go to work” he tells the man with the new arm.
We won’t give the rest or the ending away, but this powerful 18-minute film is a wonderful example of Christ taking our sins and bearing them on Himself, so that we might be restored and made whole. The film finishes with a powerful conclusion as to what the ultimate price was that Christ paid, and these words appear on the screen: “He put new rags on me, and I am a wonder by him.” A gripping song plays during the credits which speaks of “his hand” is always there, and “I see you everywhere.” The film was produced with the help of a couple of Lutheran churches. Walter Wangerin Jr. died in August 2021 and this is a wonderful living testimony of God’s love.

This commendable film has earned our Dove seal with its creative story in reaching a modern generation with the good news of Jesus. It is Dove approved for All Ages.

Your family will see the love of Christ in a fresh way after watching this innovative and touching film.