West of the Divide 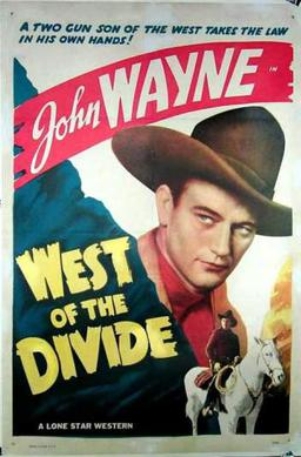 Ted Hayden impersonates a wanted man and joins Gentry’s gang only to learn later that Gentry was the one who killed his father. He saves Virginia Winters’ dad’s ranch from Gentry and also rescues his long-lost brother Spud.

A very young John Wayne stars in this rip-roaring Western, which incorporates an interesting plot along with lots of action. Wayne plays Ted Hayden, a man who was left half-dead years before with a bullet in his lung. But a man named Dusty Rhodes (played by character actor George “Gabby” Hayes) came across his path and saved him. He nursed Ted back to health over a two-year period. Ted lost his father to the same outlaw and was separated from his young brother. Now, he learns that a crook named Gat Ganns has been hired by a man named Gentry to help him rustle cattle and to get his paws on his neighbor’s cattle and ranch. Old man Winters (Lafe McKay) and his daughter Fay (Virginia Brown Faire) own the ranch. Gentry not only wants the ranch, but Fay too.

Interestingly enough, Ted resembles Gat Ganns and plans to go undercover to learn more about the plot. He also plans to learn more about his father’s death and what happened to his brother. Gentry doesn’t want Fay harmed but will gladly kill her father if it gets him the ranch.

When Ted and Dusty arrive at Gentry’s, Gentry thinks Ted is Gat Ganns and hires him. Ted saves a young boy named Spud (Billy O’Brien) from a runaway horse and wagon. When Ted sees how a ranch hand named Butch treats his stepson, which includes taking a whip to the boy, Ted steps in and teaches the cruel Butch a lesson he won’t soon forget. Spud takes an instant liking to Ted, and they form a bond. Interestingly enough, a startling revelation comes out regarding the boy by the movie’s conclusion.

Ted and Dusty also find Fay in a barn, wounded from a bullet wound when two of Gentry’s men fought on the ground and the gun fired. They take her to the doctor who treats her and tells her she will be fine. The doctor phones her father to tell her she will be okay.

Ted eventually reveals to old man Winters who he is, and how Gentry is plotting to take his ranch. They work together and Ted convinces Gentry a short while later that the old man has been killed by Ted. Gentry falls for it. Gentry also becomes jealous when he senses an interest in one another between Ted and Fay. Without spoiling the ending, let’s just say that Ted and Gentry have one long fight, with it going back and forth as to who is winning. And Ted learns the answers to all of his questions. A funny ending involves Spud and Ted and Fay. There’s a lot of scenic moments and plenty of horses giving chase in the film.

There is some gunfire and a vigorous fist fight in the movie, with a character seen with blood on his mouth. And there are a few very brief instances of a character smoking a cigarette. However, none of the scenes are over the top and we are awarding the film our Dove seal for All Ages. It’s a good story about defending those who can’t defend themselves.

Watch Ted (and John Wayne) come into their own in this family-friendly film which has just about something for every family member to enjoy.

Faith: None
Integrity: There are examples of people sticking up for one another and helping each other out.
Sex: A man briefly tries to kiss a woman who rejects his advances.
Language: "You loco fool!"
Violence: Some shooting and a lengthy fight with a man who is seen with blood on his mouth; a man is shot and killed; a woman is wounded and a bit of blood falls to the ground; a man is seen about to take a whip to a boy, but he is stopped.
Drugs: A man smokes a cigarette in a couple of brief scenes.
Nudity: None
Other: Betrayal and deceit; tension and disagreements between characters.