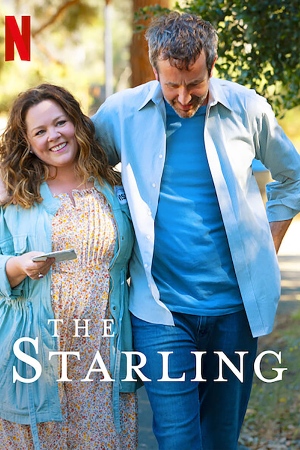 A film about a couple grappling with the loss of their child.

It’s clear that favors were called in for the making of Theodore Melfi’s maudlin and messy melodrama The Starling. How else do you explain Melissa McCarthy, Chris O’ Dowd, Kevin Kline, Timothy Olyphant and Daveed Diggs signing up to do this?

Blame can be laid at the feet of screenwriter Matt Harris, in his feature debut. The script is laden with dumb jokes and cringe-worthy metaphors, to the point where you ask: Why did the cast even agree to be here? It’s the kind of melodrama that piles on sappy music, soapy messaging and unsubtle symbolism; the kind of melodrama that uses trees, gardens, birds and bird poop as metaphors for what our characters are feeling.

The Starling refers to the bird that attacks Lilly (McCarthy) in her garden. But it also refers to the grief that keeps swooping down and striking her, picking at her brain and turning her life upside down. You see, Lilly lost her daughter a year ago, and her husband, Jake (O’Dowd), is now living in a mental health hospital to deal with his depression. While Lilly holds down the fort at home, he goes through the motions at Lost Horizon.

There are strong, adult themes here, particularly involving the different ways parents may grieve the loss of a child and process the guilt, resentment and confusion that follow. But The Starling is such a silly, whimsical movie, that none of the serious stuff lands. Every time a bird swoops down to attack Lilly, it’s not some grand statement about loss. It’s a slapstick gag, with McCarthy yelling and screaming and falling and wearing a football helmet.

She tries to poison the starling, throws rocks at it and even curses at it, but then learns how the bird and her are alike. “Starlings are not like other birds,” her psychologist (Kline) tells her. “When they mate, they build a nest together. They are not meant to be alone.” Lilly is alone at the nest, like the starling, which explains her sporadic behavior. The only thing keeping her from completely losing it is Jake’s slow-crawl back to normalcy.

The Starling could have worked in better hands, but the script fails these characters and their story. Metaphors do the heavy lifting and we never know why the daughter passed away, or why Jack feels responsible. The script tells us too much yet not enough, and worst of all, it’s not at all funny, assuming we’ll find Lilly and Jack’s issues a crack-up, and supplementing their serious pain with disingenuous jokes.

How we, the audience, feel about Lilly and Jack is completely different from how the filmmakers want us to feel about Lilly and Jack. Music and camera cues suggest we are supposed to root for them, yet they are surrounded by vexation. A scene where Jack pours his heart out is meant to be heartwarming, but then we cut to someone doing their best Tiffany Haddish, BOY, you crazy! reaction shot.

The Starling is supposed to be a family-friendly, laid-back exploration of grief, but like Lilly herself, it’s afraid to welcome the darkness and say anything of substance. It shoves grief aside for humor, sunshine and indie rock, which only emphasizes Melfi’s inability to juggle genres and tones. How he got anyone to sign up for this is baffling. Couldn’t the actors tell this one was for the birds?

Even in movies as bad as this one, there can still be lessons learned and serious themes about relatable issues. That said: don’t watch it.

Depression is discussed often. Suicide is mentioned multiple times, and things can get dark, but never as dark as they should to realistically convey the situation.

A glass of wine is shown for three seconds. Jake takes pills for mental health.

Depression is discussed often. Suicide is mentioned multiple times, and things can get dark, but never as dark as they should to realistically convey the situation.