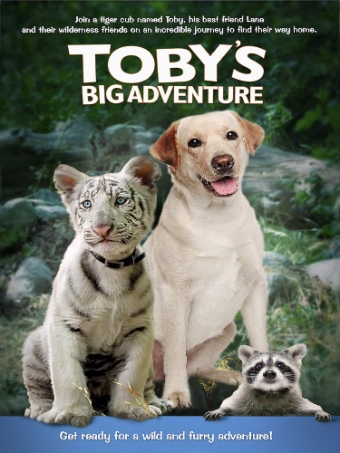 Toby's Big Adventure is the first in a brand new series of movies featuring Toby, a curious and rambunctious baby white tiger. After accidentally becoming separated from his human caretakers, Toby is joined begrudgingly by Lana, a crotchety old dog who whose best days are behind her. Together they embark on a journey through the wilderness. In order to find their way home, they will need the help of woodland creatures to escape a pack of hungry coyotes, and other lurking dangers. Along the way they learn the importance of teamwork, communication and that you can actually teach an old dog, and a baby tiger new tricks.

This is a very good movie for the family to watch together, wholesome with a lot of animals that talk! And there are several really funny lines spoken in the film. Starring Georgina Toni as the young white tiger cub Toby, and Toni Tinkelman as the wise dog Lana, who is a bit crotchety, but protective. The film focuses on Toby getting lost and Lana finding him, only to protect him from the woodland creatures.

There are a lot of diverse animals and birds such as an owl, a parrot named Jack that talks like a pirate, including the “arrrrrhhhhhh!” And there’s an ostrich, a camel, rabbits, a raccoon named Cosmo, a rooster called “Sarge” who is very much the drill sergeant, and tells the other animals, “Everyone up-It’s 6 a.m.!” It’s an adorable movie with various animals looking out for one another, but a group of coyotes would like to make Toby and Lana their dinner. And Nero, with a very distinct and evil-sounding voice, is a wolf that intends to get Toby and Lana away from the coyotes for his own dining pleasure.

In another humorous scene involving Sarge, he tells an old dog to give him 20 (push-ups!) The old dog replies, “I’m in my golden retirement years!” In another scene Toby asks one of the animals, “Are you awake?” The reply is, “No,” to which Toby replies, “Then how come you answered me?”

A couple, Alex and Bella, run a rescue shelter for animals, and every so often it is time for the animals to go be shown to a group of kids, or to be released. Jack the parrot remarks, “Arrrrrrhh…today is the day the boy sets sail, by thunder” (speaking of Toby). Toby’s mom tells him, “I’ll be here when you get back. Stay out of the sun-don’t talk to strangers. Don’t take anything from strangers or give anything to strangers” (she’s quite the protective mother). A subplot involves a girl named Katie who has her boyfriend, Donald, over for dinner, and her father doesn’t like him. One reason is that Donald is not a hunter like the dad. But Donald decides to go on a hunt to prove he’s worthy of the man’s daughter.

As Alex and Bella visit the kids some interesting facts are taught, for instance-that white Bengal tigers (like Toby) are from India. And they are wait because they don’t have orange pigments. So, the movie is educational as well as entertaining. Joshua, a smart boy in the group, is rewarded with a medal for his knowledge and he gives Bella a hug in a heartwarming scene in the film.

Toby gets into a garbage can, searching for food, and winds up being hauled away by a truck. Lana takes off after him and their adventures begin. In a scene that parents can relate to, Lana leads Toby toward a certain destination, and Toby keeps asking, “Are we there yet?” “No” replies Lana. “Are we there yet?” asks Toby again, and this continues for a while. The idea of the small animals acting like kids works well. In one scene, some ducklings have a disagreement which features them saying, “You pushed me!” “No, you pushed me!” And Toby also wants to play the game “Marco Polo” with Lana. As they try to search for home, Donald pitches a tent but has all kinds of problems in trying to prove he’s a man. In one scene he accidentally shoots his bag of water which had been placed safely in a tree, and the water all leaks out. He also catches his own feet on fire, but he manages to survive anyway.

One of the jokes is about a dog being away and the comment is made, “Dog…gone. Get it?” And when the coyotes get close to Toby, one of them says, “I’m in the mood for some tiger tacos!”

Rest assured everything in the story will be wrapped up nicely. In one scene Donald is still struggling with his outdoor life and decides that Katie’s father can keep her! Will Toby and Lana make it back home, without becoming lunch for the coyotes or for the hungry wolf, Nero? How does an old friend of Toby’s mother, named King (a bear) fit into the story? You will have to watch until the end to learn how it all works out. But it features nice themes of friends helping each other, and the older teaching the younger some life lessons, so the film has earned our Dove seal for All Ages.

Your whole family will enjoy this funny movie, filled with all sorts of animals and terrific scenery.

An old dog oversees and helps protect a young tiger; a teacher rewards a boy for showing his knowledge about animals; various animals look out for Toby and Lana as they try to find their way home.

“You fool!” says a dog about a man; “Shut up” is uttered a couple of times.

Although a few coyotes plan to eat a tiger and a dog, as does a wolf, nothing comes of it.

A few drinks are shown which is difficult to tell if it is soda or possibly alcohol.

A dog urinates on a hapless man, which is played for humor; a few animals are interested in making Toby and Lana their “lunch”; animal flatulence; a boy wonders if some kids will get sick and vomit.