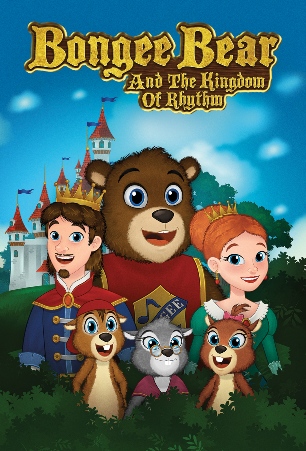 Bongee Bear and the Kingdom of Rhythm

In a peaceful land, Bongee Bear, vows to protect Princess Katrina with his life. When the evil witch casts a spell on the kingdom, Bongee sets out with the aid of his friend to break the spell and return singing and dancing to the land.

This is a delightful movie, teeming with loveable characters, a cackling witch who dances, and the portrayal of a wonderful theme-the importance of loyalty. It’s beautifully animated too, with vivid colors, reds and blues and yellows, and the greens of the land.

King Jason, the ruler of Rhythm, is a benevolent and kind leader, and he and the queen, Catherine, become parents of a lovely daughter, Princess Katrina. Bongee Bear, following being knighted by the king, vows to protect the princess and to watch out for her. This wonderful movie includes great voice talent such as Dom DeLuise, June Lockhart, and Ruth Buzzi. In addition, it too features remarkable voice talent in the songs. One song contains the intriguing lines, “Once upon a time, not so long ago, magic filled the air, music everywhere.”

The terrific animation features the witch’s castle atop Skull Hill, and the darkness surrounding the castle and hill gives the film a poignant eerie atmosphere. Of course, humorous lines are featured. When the local baker is asked how business is, he replies, “on the rise!” and he laughs at his own joke. A special festival is about to occur and the animals must perform a special song and dance and their home and safety will be renewed for another 100 years.

The king invites witch Banderilla to a dance, and he dances with her himself. She is uncertain about her dancing, but he gives her words of encouragement. Unfortunately, she steps back onto a ball and slips and then a cake lands on her head, and the people laugh mercilessly at her. She is embarrassed and vows revenge. She places a spell on the people of the land, that they will never be able to dance again.

Mindy, the wise owl, tells Bongee that asking for the witch’s forgiveness for the embarrassment she endured is the first step in having her take back the spell. Bongee Bear has grown close to the princess, splashing in the water with her and running in a sack race with her. He even danced with her at the recent ball.  He is determined to do what he can to ensure her future happiness.

Fortunately, the animals can still dance and in a funny scene Myrin, an ostritch, does just that. Myrin doubts an apology to the witch will work. “Not in a month of Sundays,” he declares, “not in any fairy tale ever!” In another light moment we see three skulls have a conversation with one another. One skull asks if the witch is going to sing again. “It really hurts my ears,” he says. “You don’t even have ears,” another skull replies. A reply is given of, “You’re really beginning to be a pain in the neck!” The witch tires of the skulls and zaps them with her wand. In fact, she zaps two of her birds when she thinks they become smart-mouthed.

Will the witch’s spell be broken? Will the humans ever dance again? We can tell you that the power of love plays a big part in the conclusion of the movie. The film contains important themes of love, forgiveness, and kindness. It is truly a modern classic fairy tale. It has deservedly earned our Dove seal for All Ages.

This is a wonderful film with delightful characters and is a modern fairy tale of good vs. evil which your entire family will enjoy.”

Bongee Bear is loyal to the princess; a king is kind and even invites a witch to a ball; a wise owl suggests that forgiveness be shown to the witch; various characters help to try to restore dancing to the land.

A witch zaps various characters with her wand including her servant birds and some skulls.

A witch casts a spell on the humans of Rhythm; disagreement between characters.