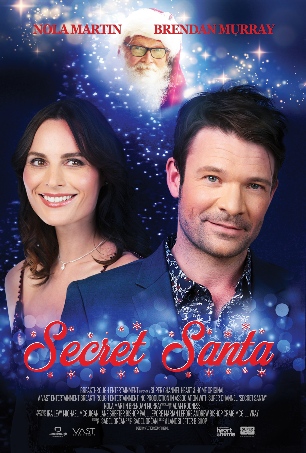 An ad exec with a sad Christmas past creates a campaign which suggests Santa is unnecessary, causing a huge backlash. To find inspiration for a redo she volunteers at a charity providing for those who can't afford Christmas but things don’t go as planned when her real motives are discovered.

When the multi-award-winning (including an Emmy!) Producer/Director, Lane Shefter Bishop, chooses to direct a film,  the viewer can be assured all the right elements are in place to deliver a movie well worth watching! This charming Christmas romance that includes Santa and a lovable puppy, is Dove approved for all ages.

Workaholic ad exec, Tiffany Baxter (Nola Martin) has no Christmas spirit.  When she creates a campaign that suggests Santa is unnecessary, there is a huge uproar and an online blogger/influencer with thousands of followers, makes it clear that this Christmas sales campaign for Kirazon Toys calls for a complete boycott of its products! Her boss, Melanie Stone (Jennifer Gibson) is furious and Tiffany had better come up with a solution or she can kiss her promotion goodbye…and mostly likely, her job!

When Amber (Andrea Carter) Tiffany’s best friend, gets engaged and leaves on a 2-week cruise to celebrate, her absence leaves a big gap in the volunteer pool at the Secret Santa Charity. Tiffany offers to fill in for Amber and sees this as an opportunity to get inspired about Christmas, change her attitude, and fix that big ad campaign blunder.  Gray Johnson (Brendan Murray), who runs the Charity, is a former high-profile Wall Street executive, but is now dedicated full-time, to the Foundation created by his late wife.  His son, Brandon (Liam MacDonald) is also not a fan of Christmas and is not appreciative of his dad’s devotion to the Charity and he and Tiffany strike up an unlikely friendship.

As Tiffany gets to know both Gray and Brandon, she begins to understand the important benefit the Secret Santa Charity brings to the community and how she can use this information to save the Kirazon Toy campaign and her job in the process.  But with the sudden death of the Charity’s anonymous donor, the entire Christmas event is in jeopardy with a huge shortfall of cash.  And when the one copy of the footage shot at the Charity party, is stolen and misused by a gloating rival co-worker, Gray’s trust is broken and he wants nothing to do with Tiffany.  As she struggles to find a solution, her attitude towards Christmas changes, and together with Santa’s help, the result is overwhelmingly more  than anyone could ever expect.  Gray is beyond delighted and is astounded that Tiffany was able to turn the fate of the Secret Santa Charity into a sustainable event with a long-lasting benefit for all concerned.

Volunteering for good causes has a transformational power that not only changes the lives of those who need help but ultimately can lead to a joyful makeover of one’s own heart and attitude.

No direct references but a Christmas movie theme throughout

Tiffany’s attitude changes when she sees the value of the Charity and put her whole heart into saving it; Gray is unfaltering in his devotion to the Charity and is a caring supportive father to his teenage son; Tiffany helps Gray’s son come out of his shell and reconnect with his father.

Woman says, “Lord, have mercy!” in a respectful manner.

Friends consume cocktails in a bar; wine at home with friends; no abuse of alcohol or bad behavior.

Tiffany jokingly tells Gray “I can tell you but then I would have to kill you."