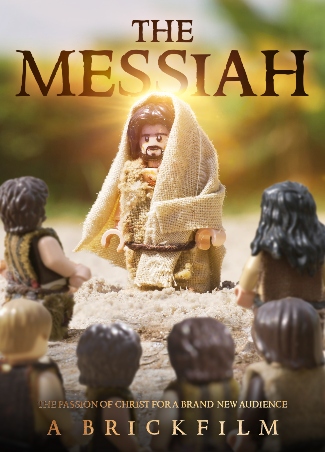 The Messiah powerfully portrays the final hours of Jesus’ life through the eyes of LEGO® characters, from the moving display of His heart at the Last Supper to the redeeming hope of His resurrection. With detailed historical sets, riveting dialogue, and captivating music, the greatest story ever told comes to life in a way that will engage the hearts and minds of a younger generation.

This is a short episode, with a runtime of 34 minutes, which kids and even many adults will enjoy. It is a Lego version of the story of Jesus! The Lego characters include Jesus, Peter and other of Jesus’ disciples, temple guards, Mary Magdalene, and the religious leaders. The music is dramatic and compelling, and the voice actors are terrific.

It might take a bit of getting used to-in seeing the story of Jesus done by Lego characters. But it is done completely seriously, and in fact the moments of Jesus’ scourging and crucifixion is shown, with a few violent scenes and blood.

Several key moments of Jesus’ life are revealed in the episode, including the Last Supper in which he says one of his followers will betray him. As he offers the bread and wine, he tells his disciples, “Do this in remembrance of me.”

We see his prayer in the garden of Gethsemane. And when the guards come after Jesus to arrest him, we see real fire on their torches! Although there are a few scenes of interactions of Jesus and his disciples, and some of his teaching, including Jesus washing his disciples’ feet, there is a focus on his whipping and trial and, ultimately, the crucifixion. He is seen blindfolded and being struck several times, with the man saying, “Teacher, prophesy, who is it that hit you?” We also see him whipped and the bloody stripes appear on his back. We see blood on his face and Jesus with the crown of thorns placed on his head.

Barabbas is chosen to be freed instead of Jesus, and Peter’s denial of the Lord, three times, is shown, and we hear the crow of the rooster following it. We see the nails struck into his hands and Jesus lifted to the cross. We hear his groans of pain. We also see the thief repent and hear a man say, “You saved others, you can’t even save yourself. If you’re God’s messiah, come down off the cross.” We hear Jesus’ sayings on the cross, including him asking why God has forsaken him, and, finally, “Father, into thy hands I commend my spirit. It is accomplished.”

Fortunately, and happily, Jesus’ resurrection is also shown. The ladies go to the tomb to anoint his body and are greeted by two powerful angels who tell them the good news that he is not there, but he is risen.

Due to the fact that the movie does show the violent moments of Jesus’ whipping and crucifixion, along with his cries of pain, not to mention a lot of blood on the Lego figure, we are awarding this film our Dove seal for Ages 12+. It is faithful to the story of Jesus, and parents should make their own informed decisions. Parents may be okay with kids a bit under age 12 watching it, but it definitely is not for young children. It is faithful to the Gospel stories, however.

This is a unique take on the story of Jesus, and kids 12 and up, and many adults, will enjoy this special presentation.

This movie is faithful to the Gospels and the story of Jesus.

Jesus loves His disciples and proves it by washing their feet; Jesus shares the good news with all who will listen, that they can believe in Him and find eternal life; the women that go to the tomb to anoint Jesus’ body have great love for Him.

Violent scenes of Jesus being struck, whipped, crucified, and it features His groans and a lot of blood.

Wine, but no drunkenness.

Jesus is mocked and betrayed; tension between characters.