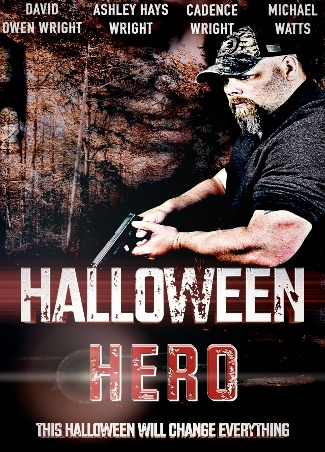 A retired police officer loses his wife to a violent attack. While trying to live with the heartbreaking loss, he has to deal with a community infested with crime. He is considering suicide when he meets a poor young child who comes to his door to trick or treat. This will be a Halloween night that will change both of their lives forever. Who will be the hero this Halloween?

Halloween Hero is an imaginative film, and is faith-based, showing how a trick-or-treat encounter changed a young girl’s life forever. Young Rachael (Cadence Wright), lives with her elderly and dying grandmother (played by Maggie Hays).  Her grandmother has six months to a year to live, and both Rachael and the grandmother are in danger of losing their home. As Grandma explains, the costly medical bills and her small social security check have combined to derail their ability to pay the rent.

In the same neighborhood lives a retired police officer named Michael (David Owen Wright). His wife died a year earlier. She too was a police officer and died in the line of duty. He has been hitting the bottle as he’s still grieving.

Michael writes the word “death” on his calendar for the date of the 31st of the month. He has a gun and at one point from his stomach points it at his chin and he also points it at his stomach. He is obviously contemplating suicide. In another scene a man attempts to rob him in his garage and Michael tells the man to go ahead and shoot him in the head. He manages to get the gun away from the man and hands it back to him, telling him to shoot him. He is obviously very depressed.

Later, some trick or treaters come to Rachael’s door, and she explains they don’t have any candy. She gets the idea to go out trick or treating herself. She comes to Michael’s house, and he says he doesn’t celebrate it. But he looks at the poor, young girl who doesn’t have even a mask or a coat, and he feels sorry for her. So, he finds an old coat of his deceased wife and some candy bars too-and gives them to Rachael. He tells her to wait a moment and he finds a few dollars to give her as well. He tells her if she needs anything else to let him know. He tells her his wife was named Rachael too.

Michael winds up protecting a girl from an assailant and lets him off, telling him the next time he just might put a bullet in his head. When Michael learns, sometime later, that his friend and her grandmother are about to head to a homeless shelter, he offers for them to live in his guest house in the back of his house. They graciously accept the offer.

We won’t plot-spoil, but things turn out well for Rachael and her presence in Michael’s life helps him to heal following his wife’s death. In one special scene Michael puts his gun away in a drawer and pulls out his Bible again. And Rachael prays in the name of Jesus in a couple of scenes. A plus as far as this film is concerned is that this movie is well directed and moves along at a nice, even pace. In an interesting note, both Cadence Wright, 11 years old at the time, and her father David, co-wrote the screenplay for this film.

This film has procured our Dove seal for Ages 12+. It might be difficult for anyone who has lost a loved one to suicide to watch the scene in which Michael thinks about taking his own life. But the film offers hope, that God sends people into our lives to help us to heal.

This faith-based movie offers hope for those who have lost loved ones, and that includes everyone.

A girl prays in the name of Jesus a few times and a Bible is seen and God is mentioned in a positive way.

A man helps a girl out, giving her a coat, some candy bars, and some money; a man allows a girl and her grandmother to live in his guest house; a man protects a girl from an assailant.

A husband and wife kiss.

A man holds a gun to self, contemplating suicide; a man holds a gun on a man, attempting to rob him and threatens to kill him; a man saves a girl from an assailant and punches him.

A man is thinking of taking his own life; a man grieves the loss of his wife; a grandmother is in danger of losing her home where she and her granddaughter live.