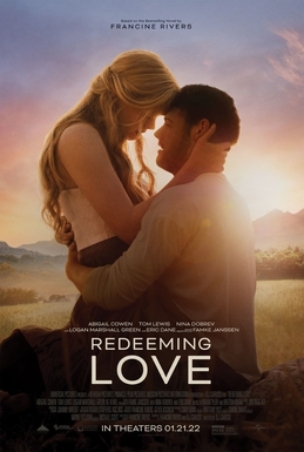 Sold into prostitution as a child, Angel knows nothing but betrayal. Can her heart ever be mended? Based upon the novel by Francine Rivers.

Based on Francine Rivers’ 1991 bestseller, Redeeming Love, set during the California gold rush of the 1850s, delivers a distinctly Christian message, but more covertly than not: symbols abound, mostly in the form of crosses and Bibles, talk of forgiveness is woven into the narrative, and unconditional love is at the heart of the protagonist Angel’s transformation. However, there is no preaching, none at all, which is incredibly refreshing. The filmmakers allow the viewer to grasp the message through the circumstances of the characters alone, and that is all that is needed.

Of course Michael Hosea, Angel’s rescuer, is indeed a Christ-like figure: He is patient, kind, loving, persevering, and self-sacrificial. After praying to God for a wife, he lays eyes on Angel, (her name is ironic given she is a prostitute), and from that moment on, he pursues her like he’s on a mission, but more like God pursues, than any of the other horrible men who pursue her in this film. Michael sees her brokenness and gently approaches her, and with undying patience, he helps her believe he is genuine. Angel, having been sexually exploited from a young age, is of course angry, bitter, broken, and resentful, and she is a survivor, so this is no easy feat for Michael. There is no room for emotion in her life, and she cannot fathom why he is so kind to her.

When Michael finds her after having been badly beaten, he is able to finally bring her home and convince her to stay. She agrees, as her options are limited, but throughout the film she runs away again and again, returning to the life she knew for so many years out of shame and self-loathing and continuing to compound her terrible choices by betraying Michael and even engaging in incest with her own father. Nevertheless, it is fascinating to watch Michael refuse to give up on her, but instead to practice gentleness, patience, and faith; he is determined to trust God because this girl he has chosen cannot be trusted.

Angel is captivating in a quiet, mysterious manner, and her journey of self-discovery and acceptance has some particularly moving moments, such as when she bravely fights back to rescue some young girls who were being exploited like she was when she was a child. When Angel runs away for the last time, Michael wisely decides not to pursue her; instead, like the father in the biblical parable of the prodigal son, he waits, expectedly and eagerly, never giving up because, as he explains to a concerned neighbor, we have free will, and must choose for ourselves. He has proven his love to her, and she knows it is available to her always.

Though sexual scenes and violence occur, Redeeming Love is a powerful channel by which to discuss God’s redeeming love in our lives. This film is Dove approved for 18+.

Michael is a consistently loving, compassionate, and forgiving individual

Abusive behavior towards women, slapping and punching is frequent, one man shoots himself in head as shown by holding gun to head – death occurs off-screen.