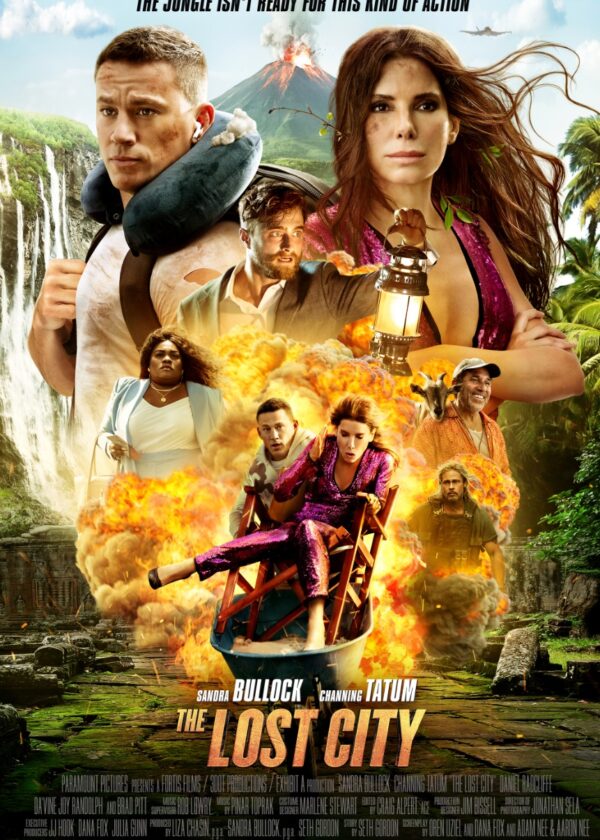 A reclusive romance novelist on a book tour with her cover model gets swept up in a kidnapping attempt that lands them both in a cutthroat jungle adventure.

The blockbuster has come to signify a very specific type of film in Hollywood — the big, epic, world-building franchises and ensembles that make billions of dollars (Avengers, Mission Impossible, Suicide Squad). But what if I told you there was a time when blockbusters could have two stars, a couple jokes, and a few dozen set-pieces?

The Lost City is here to bring that modest entertainment back into the mainstream, with Seth Gordon serving as co-producer on this production of a very specific cinematic product. Featuring beloved actors in loose clothing as they traverse the globe, The Lost City is the kind of light escapism that feels like an actual adventure. And though it clearly shares DNA with other movies, the sharp screenplay, written by Gordon, is modern and sly, enchantingly stupid and poignant at times too.

Sandra Bullock stars as Loretta Sage, the author of The Lost City of D, a romantic novel that mixes Indiana Jones and 50 Shades Grey, and features a shirtless Alan Caprison (Channing Tatum) on the cover. So, of course it’s a success, but it also attracts the attention of some unwanted people. It turns out a billionaire named Abigail Fairfax (Daniel Radcliffe) has been searching for an ancient relic, a headdress known as the Crown of Fire, and Loretta’s novel holds the answers. Before you can say “Romancing the Stone,” Abigail kidnaps Loretta and takes her to a jungle, where he’s got an army at his disposal.

Armed with airpods, a plush pillow and a rolling suitcase, Alan mounts a rescue mission with his friend from meditation class, Jack (Brad Pitt), whose resemblance to Loretta’s fictional character ignites Alan’s envy. However, before long, the mission goes off the rails, and Alan and Loretta are left to their own devices, caught between finding their way off this Atlantic island, and potentially finding love.

It takes a while to rev up, but The Lost City eventually works because of the cast. Bullock is great as the novelist with a penchant for sexual innuendos, and Tatum steps into his own as a comedic actor — and owns the shtick. He’s shown his faculty for comedy in Magic Mike and 21 Jump Street, and he has a gift for delivery and timing. As the straight man, he’s often the butt of the joke, but he leans into this persona like a happy Labrador.

The standout, however, was always going to be Pitt. Watching him inhabit the muscular, wavy-haired Jake is like watching Fabio do a Bruce Lee impression. We watch him take over every scene, and the comedic chemistry he shares with Tatum, who sees Jake as a role-model, is the best part of the movie.

The whole thing is a wacky homage to old-school blockbusters, and it never sacrifices the dumb, weird or childish moments that make them so endearing. The cast is game, the vibe is cool and the audience is always entertained.

This is an old-school adventure with some great performances, a few good jokes but the sexual content and language are the biggest causes for concern.

Give Alan, the hunky model featured on Loretta’s books, credit for his honesty, bravery and being willing to endure hardship to come to Loretta’s aid, even if he’s overmatched. Give Beth, Loretta’s publisher, credit for her prizing people over money-making concerns in her quest to rescue her friend.

A shot of Bullock looking at and describing Tatum’s crotch (not shown). Lots of ogling and touching. Lots of sexual innuendos.

Characters do a lot of drinking, whether it’s beer, champagne, tequila, whiskey or wine. There’s a drunken twentysomething. And there’s even some cigar-smoking by the bad guys.